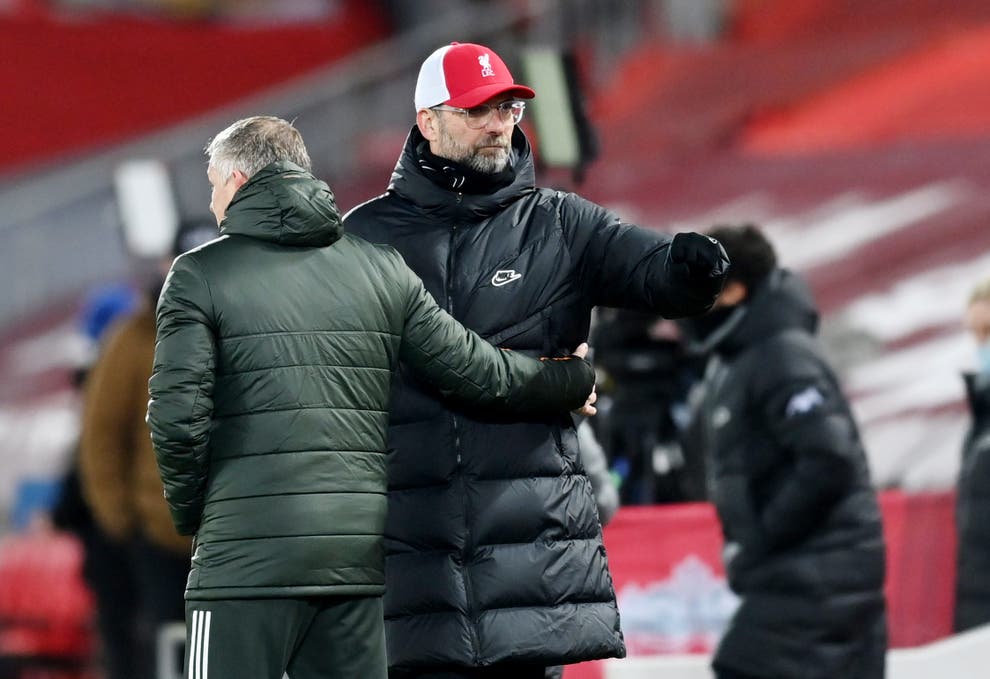 Jurgen Klopp has defended Manchester United manager Ole Gunnar Solskjaer’s decision to field a weakened side against Leicester, which led to a 2-1 defeat to make Liverpool’s chances of making the top four more difficult – in addition to sealing the title for Manchester City.

Speaking ahead of Liverpool’s rearranged trip to Old Trafford on Thursday evening, Klopp said it was “a crime” that the Premier League scheduled United to play three games in five days, which provoked Solskjaer into leaving Bruno Fernandes, Marcus Rashford and Edinson Cavani among the star names on his bench against the Foxes.

“But it is not the fault of Ole and the players. My question to myself was: ‘would I have done the same? Yes’. You have to. You have to. We are late in the season, all the players played a lot of games. United went to the Europa League final so that means an awful lot of games and now you get Sunday-Tuesday-Thursday. That is not possible.”

Klopp believes his captain Jordan Henderson has a chance of being fit for England’s Euro 2020 campaign this summer, even if he has no chance of playing for Liverpool again this season.

The Reds captain has been out since groin surgery in February and while his timescale of recovery will come too late to help the push for a top-four place Klopp expects the midfielder to be ready for international duty if selected by Gareth Southgate.

“Hendo doesn’t play and doesn’t train normally with us so that is a decision between Gareth and Hendo but I think there is a chance for sure,” said the Liverpool manager. Unfortunately not for us but for England. Hendo’s not out (of Euro 2020) yet.

“It will probably be around the last week when he will have the chance to train with us but he will have been out too long to play for us. He would be completely fit and what makes it really different to all other English players probably, maybe Declan Rice as well, is that he would be properly rested.

“Because the problem all the managers have at the moment is any injury you get now is probably a season-ending one, even when it is not a serious injury. But with the tournament coming not too far after it it could threaten the tournament or a potential (European) final coming up.

“That means Hendo will be rested and has a proper pre-season for the Euros if everything works to plan. He is not out of that.”

Meanwhile Solskjaer said he expects his captain, Harry Maguire, to miss the rest of the league season but to be in contention for the Europa League final against Villarreal at the end of the month.

She’ll be right, Maroons have been here before: Papalii