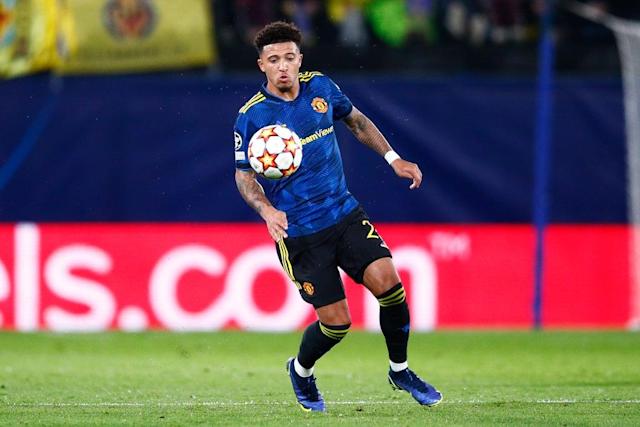 Even before his first goal for his new club finally arrived in the last of the 90 minutes which made up his 15th appearance, he had already put in the most eye-catching performance of any player on the pitch.

This was not only a fresh start for Manchester United on a collective level under the guidance of caretaker manager Michael Carrick but it was also a new beginning for Jadon Sancho on an individual level too.

The goal in question, similarly, was not only a well-constructed counter attack by a collective but finished brilliantly by the individual on the end of it. Like with Cristiano Ronaldo’s crucial breakthrough shortly before, it came from Fred winning the ball, only this time he was inside his own half rather than deep in Villarreal territory and there was plenty of ground still to cover.

Some credit has to go to Ronaldo, who does not normally station himself back in United’s own half and out wide but was ready to backheel a return pass to Fred then sprint down the left wing to set up a counter. Once found by Scott McTominay’s through ball, one neat lay-off could follow another and another, as Ronaldo, Marcus Rashford and Bruno Fernandes combined to lay up Sancho.

The strike itself was clean, rising sharply at a 45-degree angle, with speed to beat goalkeeper Geronimo Rulli, enough power to slam down off the underside of the crossbar and crash over the line. There was then a raw blend of joy, triumph and relief on Sancho’s face as he rushed away to celebrate. The moment he had spent the last three months waiting for had finally, thankfully, arrived. So too had his best performance to date as a United player.

“I think he’ll be better off for tonight, playing how he played,” Carrick said, before replicating a tick of the man he has just replaced in the United dugout by trailing off in his answer, as if mildly and momentarily awestruck. “The goal is the obvious one and for Jadon himself, it’ll give him a massive boost, but I thought his performance overall…” That little pause there, that means he thought it was good.

It was good, too. Sancho could have scored much earlier than he did, particularly when he combined brilliantly in a one-two with Fernandes and bypassed the Villarreal backline entirely, going clean through on goal only to shoot low into Rulli’s legs. In the first half, there were several flashes of a nascent understanding between him and another player with something to prove in Donny van de Beek.

Other relationships, particularly with Aaron Wan-Bissaka, require a little work. But in what was for the first hour a muted and disjointed attacking performance from United, it was notable how Sancho set the standard others needed to meet. There were several occasions where the young winger’s speed of thought or speed of feet outfoxed not only Villarreal but his own team-mates, who would do well to get on the same wavelength. Something else stood out for Carrick, too.

“The most pleasing thing for me was the effort and application he put in off the ball,” he said of Sancho after the final whistle. “At times he didn’t see a lot of the ball but he was doing a job and he played a big part in the team performance.” That was especially clear in the early stages when Sancho’s diligence in tracking back to help his full-back stood in contrast to Ronaldo on the opposite flank and made Carrick’s new 4-3-3 system look more like a 4-4-2, Ronaldo was later switched to a more familiar position up front.

Why had we not seen all of this from Sancho before? Perhaps because United were playing to his strengths. “I know how much he likes the ball at his feet,” Carrick added. “That’s where he’s happiest”. It was the type of observation you rarely heard from Ole Gunnar Solskjaer over the past few months, who preferred to simply reassure journalists Sancho would come good rather than explaining how that might happen. Which is not to say Solskjaer did not appreciate Sancho’s talent. Far from it.

Solskjaer’s interest in Sancho dated back to his first few months of his reign, to a time when he was still an interim manager himself. Within a year, the then Borussia Dortmund winger was both his and United’ hierarchy’s priority transfer target. Then the pandemic hit, Dortmund held out for a substantial asking price of £110m and a compromise could not be found. And by the time he arrived for a mere £73m this summer, bedding in took time.

Sancho’s availability was limited at first by an infection in his left ear that Solskjaer only referred to as an “illness” publicly, though Sancho could be seen making use of a cotton bud in the affected ear in a video showcasing his first training session. That and the need to recover from the physical and mental fatigue of England’s Euro 2020 final disappointment meant the then-United manager felt he was “nowhere near” fit enough to start the season’s opener against Leeds.

Then, two days before his first start away to Wolves, Ronaldo’s return was agreed. Sancho would be playing alongside the Portuguese by the time of his second start, the 4-0 defeat of Newcastle, but the competition for a place in United’s attack had only grown more intense. The first hint that Sancho may not be an automatic starter going forward was his first half substitution in response to Wan-Bissaka’s sending off against Young Boys.

There was said to be some disagreement over that change, with at least one prominent member of Solskjaer’s coaching staff wanting Sancho to stay on the pitch and for the sacrifice to come elsewhere, but he would be replaced, then dropped for the following weekend’s trip to West Ham and start only two of United’s next seven league and European games.

Perhaps if Sancho had arrived a year earlier, he could have hit the ground running sooner into his Old Trafford career. Who knows, Solskjaer may even still be in the job. Considering the depth of the Norwegian’s admiration for Sancho’s abilities and the length of United’s pursuit, it was nevertheless surprising that he arrived without a nailed-on role in Solskjaer’s system and was deployed on the left despite United’s age-old need for a creative right winger.

Sancho was back out on the right in Villarreal, as he was during the Vicarage Road debacle on Saturday when he and Van de Beek were the only players to emerge from Solskjaer’s final game in charge with any credit. “It’s up to him what happens next and how he kicks on,” Carrick said. Sancho is still settling in, still waiting for an extended run of starts, still just 21 years old, but he is starting to show why Solskjaer chased him for so long, and why he should be the cornerstone of the post-Solskjaer era.

Fundraiser for Victim’s Father Who Lunged at Larry Nassar Raises More than $30,000