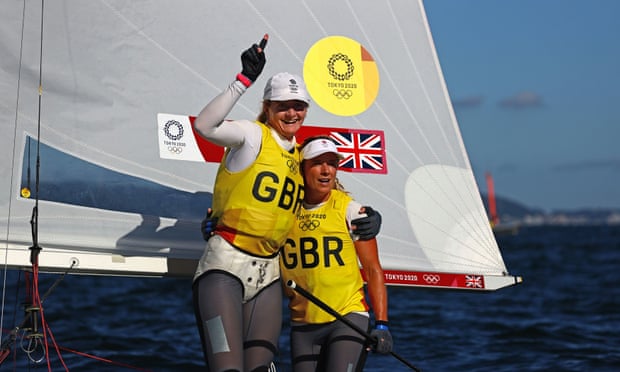 Britain’s Hannah Mills said becoming the most successful female Olympic sailor ever “didn’t feel real” after the reigning champion and Eilidh McIntyre clinched the final sailing gold of the Tokyo Games in the women’s 470.

“There’s such incredible female sailors. I am sure not too far away that will get trumped and that will be amazing,” she said. “Hopefully we are inspiring the next generation of women’s sailors and that is as important to us as the medal, getting people out on the water to enjoy the incredible sport.”

The 33-year-old Mills added that this is likely her last race but that she had been “trying really hard not to think about [the future]”.

In the medal race Mills and McIntyre needed only to finish in the top seven to secure gold. They quickly fell in behind Switzerland and remained second going into the final leg. The pair dropped down to fifth after rounding the final mark but had done enough to extend their lead at the top to 16 points.

Their fall-back at the close of the race prompted a formal protest from France, who dropped from second into the bronze medal position after Poland overtook Britain at the last mark. A sickening 40-minute wait ensued until the protest was dismissed.

“That was unexpected from our side,” said Mills. “We want to race our race and to win a gold medal, that’s all we really cared about. Obviously emotions are always high, it’s pretty stressful, pretty hot out there. They came up to us a while ago, apologised, and said they completely respect what has happened. It’s all good, we have massive respect for them, they are amazing competitors.”

Would they ever let a boat through? “No, never,” said Mills. “We’re racers!” chipped in McIntyre.

Mills and McIntyre secured seven top-three finishes in their 10 races to give themselves a healthy 14-point lead over Camille Lecointre and Aloise Retornaz before Wednesday’s double-points medal race. After the protest was dismissed, the French duo were confirmed in bronze behind Poland’s Agnieszka Skrzypulec and Jolanta Ogar.

Before the medal race there were nerves. “I just wanted to win,” said Mills. “To be successful, to make Eilidh proud and my team proud and everyone back home proud. You want to come to an Olympic Games and deliver, it’s a lot of pressure. That’s nerve-racking.”

The pair slept well the night before but woke early. “It felt like Christmas this morning. A really nervous Christmas,” said Mills. “Will Santa come?” added McIntyre with a big grin.

Mills, who was a flag-bearer for Team GB during the opening ceremony alongside the rower Mohamed Sbihi, won a silver medal at London 2012 and then gold in Rio in 2016 before her then partner, Saskia Clarke, retired from Olympic racing. Mills was considering doing the same until the 27-year-old McIntyre rang her and told her she was the person to help her get a second title. They began sailing as a pair in 2017 and won the World Cup Series in Santander in Spain in their first race together.

“The most nerve-racking phone call? Maybe,” said McIntyre with a laugh. “I knew I wanted to get Hannah back and I am so glad she is here. It’s not been the journey either of us expected, it was hard to persuade her back, let alone do another year. It’s just phenomenal. This is what we came for. We weren’t after anything else. That is what I said in the phone call: ‘I want to win gold with you and nothing else is going to do,’ and here we are and that’s wicked.”

McIntyre added that her father, Mike, who won gold in Seoul in 1988 in the Star class, had been “my inspiration my entire life” and that his medal had hung on the wall opposite her bedroom door growing up.

“I’ve always dreamed of having one of these and here I am and I just can’t believe it. It’s been such a fight and such a long journey and it feels like 25 years of dreaming,” she said.

The 470 class is to become mixed for 2024 and Mills is happy to see the change. “Sailing’s a great sport for mixed races, we saw that this time round in the Nacra,” she said. “The 470 is a brilliant boat for that, you can have a female helm or crew, both combinations will work really well. I think it’s brilliant and super-inspirational for kids to see men and women competing at the top together.”

Luke Patience and Chris Grube came fifth in the men’s 470 after a disappointing eighth-place finish in the double-points medal race. The Australian duo Mathew Belcher and Will Ryan picked up a fourth first-place finish to win gold, having gone into the medal race with an almost unassailable 20-point lead. Sweden clinched silver with a second-place finish and Spain crossed the line in fifth to secure bronze.

Patience and Grube, who won bronze together at the junior world championships in 2006 before going their separate ways only to reunite shortly before the Rio Games, went into the medal race in fifth. They were nine points behind the bronze medal position with faint hopes of climbing into contention but slipped behind the leading six in the fleet early on, could not close the gap and were pipped to seventh by Italy.

On the right note: Heat have high expectations for Dwyane Wade’s final season

Chris Tremlett: England should not rush Stokes back into team

Sponsors could yet derail Reds’ play for Israel Folau

Messi ‘icing on the cake’ for dangerous Barca