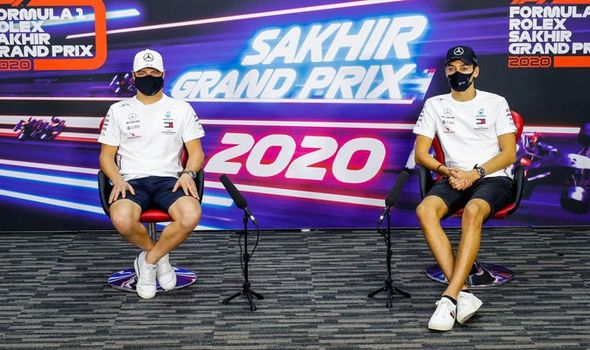 George Russell didn’t prove anything at the Sakhir Grand Prix as Valtteri Bottas was ‘crap’, according to Red Bull chief Helmut Marko. The Williams star stepped into the Mercedes car after Lewis Hamilton tested positive for coronavirus.

Russell looked on course to win the race on two occasions before a pit stop problem and a puncture dropped him down the field.

The 22-year-old was able to recover to ninth and post the fastest lap of the race nonetheless.

Bottas struggled throughout the weekend and Marko thinks it means Mercedes don’t have a true reflection of who may be the faster driver.

He explained: “Russell is an intelligent and fast young man. His Mercedes effort was great.

“At the same time, that was characterized by such uncertainty on Bottas’ part that it wasn’t really an admissible comparison.

“Bottas put together such crap from the first lap on Friday that was way below his normal level.”

Marko also opened up on Red Bull’s decision to replace Alex Albon with Sergio Perez and admitted there was no chance of securing Russell.

He said: “Russell is a Mercedes junior. There’s no need to put a false label over it.

“He has a ten-year contract with Toto Wolff. He is a Mercedes junior.

“We were looking for an interim solution for one year. Perez is the much better option there.”

Mercedes are considering Russell for the 2022 season but for 2021 he will remain with Williams.

The first race is the Australian Grand Prix which takes place on Sunday, March 21.

Russell is confident Williams can take a step forward and beat Haas and possibly Alfa Romeo as well.

“I am confident that we can beat Haas next year,” he said.

“I think we will be on a par with Alfa Romeo, but I like to think we can pass that team too, given the progress we are making.

“We want to score points next year. We will not suddenly be in the midfield fight as the rules remain the same, but we will definitely have to aim to beat Haas and Alfa Romeo.”

Williams finished last in the constructors’ standings last season with Russell yet to score a point at his current team.