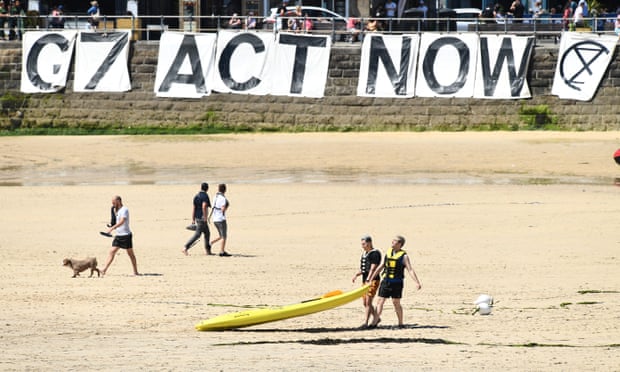 The Atlantic charter of 1941, signed by then prime minister, Winston Churchill, and US president, Franklin D Roosevelt, set out the principles that would govern the postwar world. From self-determination to international trade to “a world free from want and fear”, its ambitions were lofty and its goals expansive. We live today with its legacy.

Some 80 years on, Boris Johnson and Joe Biden signed what was termed a “new Atlantic charter” ahead of the G7 meeting in Cornwall. But the new Atlantic charter reflects the diminished status of both the US and Britain in the 21st century. It set out some sensible areas for bilateral cooperation – from quantum computing to air travel – but there was little of lasting note. These were not two world leaders charting the future for humankind, nor indeed for post-Brexit Britain: there was not even a promise of a US-UK trade deal.

Meeting in person for the first time since the pandemic began, the self-styled “group of seven leading industrialised nations” had enormous problems on the agenda: bringing the pandemic to an end, ensuring the world economy recovers rapidly and accelerating action on the climate crisis. But the magnitude of the problems was not matched by the scale of the response.

The G7 promised to release 1bn doses of vaccine to the world’s poorest countries. But as the International Monetary Fund has pointed out, these are simply the doses that have been ordered but are surplus to their needs. This was not a group of leaders making sacrifices for the sake of the world. With the costs of the pandemic estimated to be $28tn, it is incomprehensible that the G7 failed to deliver a serious plan to produce, distribute and finance vaccines globally.

In truth, we are in a leaderless world. President Biden has returned the US to diplomatic respectability, recommitting to its international obligations and alliances. But while he aims to be a transformative president at home, his ambitions abroad are limited and largely a return to foreign policy orthodoxy. The rest of the world simply isn’t a priority.

The real achievement of note came before the summit rather than at it, with a global agreement on corporation tax. This was mainly a spillover benefit from Biden’s domestic priorities: he is the first president in half a century to seek to correct the gross imbalance between the power and rewards that flow to workers versus those that go to shareholders. Fairer taxation is crucial to accomplish that rebalancing.

The reality is that the US is no longer the unrivalled power it was in the period immediately after the fall of the Berlin Wall. There was some trolling of China – pushing the “lab-leak” theory on the origins of Covid – but for the most part, the US needs Pacific partners to help it contain China, not European ones. The goal of containment tickles nostalgia-pickled British politicians, but there is little of substance that they bring to the table.

Indeed, for many countries, attempting to determine world affairs without the world’s second largest economy at the table is a throwback to the cold war era, when far less of the global economy was internationally traded. While a new anti-China consensus has been forged in Washington – in substance, Biden’s policy towards Beijing differs little from Trump – there is little appetite for most countries to be caught between two powers vying for supremacy.

Meanwhile “Global Britain” is best understood through the looking-glass: the government’s actions are the inverse of its rhetoric. Britain is in dispute with its nearest neighbours over the Northern Ireland protocol, having already diminished its influence by leaving the EU. It has slashed foreign aid in the middle of a global crisis, reneging on obligations from medication for people living with HIV to schooling for impoverished children. It seeks every opportunity to undermine the BBC, which gives Britain reach around the world. Global Britain is peculiarly parochially minded.

Over the past 18 months, the pandemic has reaffirmed the centrality of nation states in human affairs, with little international coordination and the sidelining of multilateral institutions. Nations with the capacity to act globally seem to lack the ambition beyond the pursuit of their narrowly defined national interest. Those with the ambition lack the means or commitment. And so the G7 meeting reflects the reality that we now live in a G-zero world.

Two-speed Europe is a mistake

Brexit can still be stopped

Time for Europe to embrace democracy

What Turkey hopes to gain from Khashoggis murder