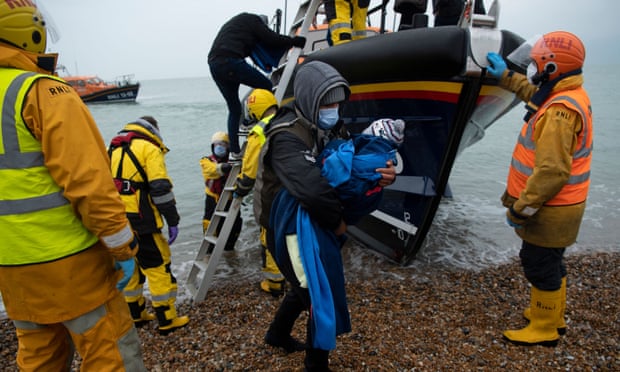 Politicians need an answer to every problem, even when there isn’t one. Pretending to be omniscient and omnipotent is in the job description – though the result is that public trust leaches away, since some problems don’t have politically acceptable solutions. There is no politically satisfactory answer to asylum seekers arriving in Britain when many voters feel “controlling borders” is the definition of nationhood. So impossibilism rules.

Politicians could point to net migration plummeting last year to 34,000, far below David Cameron’s original 100,000 promise; the net number of EU nationals coming to the UK even went negative, caused by a combination of the pandemic and Brexit. Or they could show that less than half the number of asylum seekers arrived in the UK compared with the early 2000s peak. Numbers of asylum applications are very low compared to France and Germany, while around 85% of refugees worldwide are camped in the poorest countries. We make a disproportionate fuss over taking just 1% of the world’s 26 million refugees. But pollsters will tell you none of that cuts any ice with voters.

Blame Shakespeare’s John of Gaunt, with his preposterous eulogy to English exceptionalism: “This other Eden, demi-paradise / This fortress built by Nature for herself / Against infection and the hand of war…” As infection and refugees from war arrive here, John Donne’s better truth, “No man is an island entire of itself”, is a more reliable guide for our times: it illustrates the failure to enable poor countries to access vaccines rebounding on the rich world like an avenging angel, through the Omicron variant. Or take our failure to help to staunch the flow of refugees at source, made harder by the fact that Britain is cutting foreign aid and has shuttered its development department. Berate this country’s age-old inability to compare ourselves rationally with any other country, but as one pollster warns me, for politicians, being seen to be complacent about immigration is “not a hill to die on”.

The Tories, alarmed at “losing their grip” on borders, as on so much else, take fright at Nigel Farage’s threatened return to politics. He may never win a seat, but he has demonstrated his power to deny them a host of seats in the past. He has them in such a lather that the cabinet is engaged in a circular firing squad, blaming each other for the dinghies in the Channel. Priti Patel’s allies berate the cabinet for doing “sweet f*** all”, reports the Sunday Times. She blames a do-nothing Foreign Office for failing to negotiate a return of refused asylum seekers. “The one thing they’re supposed to do is to speak to foreigners and foreign countries,” says a friend of Patel. They rail against Ben Wallace for offering no military barracks as asylum detention centres. A cabinet minister retaliates, saying that “she has over-promised and underdelivered”: her plan for processing asylum seeker applicants in Albania disintegrated when that country found out about it, crying, “fake news!”

“Stick with Prit,” the prime minister said of his home secretary over her breaking of the ministerial code – and why not, when Cruella draws all the flak for the brutality and ineffectiveness of this government’s migration policy? She rails against Border Force for refusing to turn around fragile boats, but captains don’t want to break international maritime law. Her nationality and borders bill’s penalty of up to four years in prison for “inadmissibles”, asylum seekers who arrive unlawfully, is another fantasy. Boris Johnson met the Common Sense Tory MPs group, reports the Express, promising some new wheeze: “He has a plan but didn’t want to reveal the details yet,” as his cabinet “wets” would wreck it.

What seems to be brewing is an attempt to derogate or abrogate the 1951 refugee conventions obliging signatories to harbour those fleeing persecution. The UN refugee agency says the bill already breaks the convention by penalising asylum seekers for arriving through safe countries.

That’s how the wind blows when even someone seen as a liberal Tory like Matthew Parris advocates abandoning the Geneva convention. You could say the convention belongs to a cold war era, suitable for encouraging the escape of communism’s dissidents, not a mass exodus from poverty-stricken and often gangsterised perpetual war zones, where the lines blur between overlapping terrors. But I’ve never been clear on the human rights difference between a family fleeing so their children don’t starve, and a family escaping their children’s murder for ethnic or political reasons.

Government figures show that 55% of applicants are granted asylum but Peter Walsh of Oxford University’s Migration Observatory says “of 10,000 refused, at least a half never leave. The backlog of assessments is 88,000, some waiting three years or more.” January’s “tough” new law labelling arrivals “inadmissibles” if they came through safe countries does nothing to solve this. How they arrived is unprovable since Brexit Britain lost access to Eurodac, EU fingerprint data. Of 4,500 “inadmissibles”, says Walsh, “only seven have been returned, with so few agreements with countries to take people back”.

What happens to those who are refused? Most stay, living lives of limbo, vanishing into an underground economy. That’s why all this “tough” stuff is bogus. It would be better by far to admit the truth and let asylum seekers live, work and integrate legally. On this issue, hardline Tories such as Steve Baker and the public agree they should be allowed to earn their living. With a million vacancies, we need workers – and they are not going anywhere anyway. Nor is there any evidence that the ability to work is a “pull” factor, with not one study finding that asylum seekers shop around according to best work and benefits regimes.

Easing asylum numbers takes international cooperation, not treaty breaking or gesturing rudely at the French with undiplomatic tweets. The public may not accept that stopping all arrivals is impossible, because no one dares tell them that truth. Instead we may see rhetoric ratchet up and further policy cruelty.

The only actual penalty for reneging on the refugee convention is international opprobrium: no other country has done this. But that might cause enough public shame to stir a patriotic sense of harm done to national pride and honour. Voters also harbour a contradictory idea of Britain as a country that keeps its word, plays by the rules and sees justice done. Besides, in practical terms, reneging on a treaty we helped draw up would make it even harder to strike deals with other countries to return their citizens. If this didn’t work, what next? No one really knows. This squalid government could do anything.

How the EPP lost its way

The rise and fall of Mikheil Saakashvili

Two-speed Europe is a mistake

Emmanuel Macrons coalition of the willing