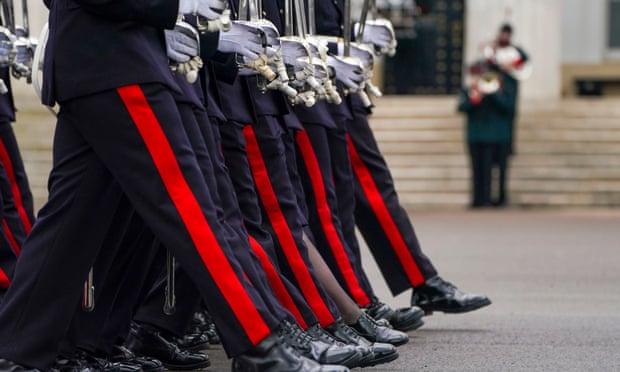 The last time 21-year-old Agnes Wanjiru was seen alive in public, she was leaving a hotel bar with two soldiers.

Her body was found by a hotel worker two months later, stuffed into a nearby septic tank, naked but for her bra. The mother of a five-month-old baby, Agnes was a hairdresser who turned to sex work to support herself and her daughter, and had gone to the hotel expecting it to be full of partying British soldiers. An inquest later concluded that one or more of them must have killed her.

According to the Sunday Times, which has been doggedly investigating this tragedy for weeks, a man identifiable only as Soldier X has been separately named by at least four colleagues as the culprit; he is said to have confessed that night to killing a woman, leading appalled fellow soldiers to her body. One of them claims to have reported Soldier X to senior officers but not been taken seriously. Grotesquely, what happened that night was such an open secret that soldiers reportedly joked about it on Facebook, with nudge-nudge references to septic tanks and “ghosts”. The rumour in the regiment was that Agnes had been accidentally choked to death in a sex game, but that story does not explain the stab wound found on her body.

If a woman was allegedly killed by a soldier in a British garrison town today, hopefully no effort would be spared to uncover the truth. But Agnes didn’t die in Colchester or Catterick. She was Kenyan, and she died in March 2012 near her home in Nanyuki, where the British army has long had a training base; a poor black woman in a faraway country whose death could apparently be brushed all too easily under the carpet. Her sister Rose said that “if Agnes had killed a white man, by now I wouldn’t even know where she is jailed. But whoever killed her went free and is living his life”.

In Nanyuki, complaints about the behaviour of British soldiers are reportedly prone to fall on mysteriously deaf ears. Kenya’s government relies on British military assistance in the fight against the Islamist terror group al-Shabaab, giving it a clear incentive not to embarrass its ally. Only after several weeks of Agnes’s face on British front pages did her family secure a promise that the Kenyan police investigation into her death would be reopened, and the killer hopefully brought to trial.

Could her death become a broader tipping point for one of the few male-dominated institutions yet to face a reckoning over sexual violence? This week, Ministry of Defence sources briefed that army top brass would face a dressing down over “conduct and culture”, with the defence secretary, Ben Wallace, reported to be keen to “drive out unacceptable behaviour at all levels, particularly with respect to the treatment of women”. Wallace, a former captain in the Scots Guards, is said to have been alarmed by a series of scandals including Agnes’s death but also the suicide of a female cadet at Sandhurst, Olivia Perks, who was also only 21. An inquest next year is expected to examine claims that she had spent the night with a senior officer and was afraid of being disciplined.

But these cases may be only the tip of the proverbial iceberg. The Tory MP Sarah Atherton, herself a former soldier in the Intelligence Corps, led a remarkable investigation earlier this year into the experiences of servicewomen and female veterans, for which the Ministry of Defence waived rules forbidding serving soldiers testifying to such inquiries. Atherton’s committee uncovered harrowing accounts of gang-rape, sexual assault, groping and exploitation. One servicewoman told MPs she found living in mess accommodation more dangerous than being deployed overseas. Others recalled contests to “bag the woman” on camp or aboard ships, and senior officers brushing complaints under the carpet to protect their own reputations. If this is what rogue soldiers do to their own female colleagues, how might they treat civilian women – often desperate or vulnerable – who they encounter on operations far from home?

In the wake of Sarah Everard’s rape and murder at the hands of a police officer, some officers talked of a policing culture where predatory men went unchecked because female colleagues who complained were at best ostracised, and at worst afraid of nobody coming to their rescue if they were attacked on duty. Now imagine being a female soldier, knowing that in combat your life depends on your unit having your back, agonising over whether to report sexual harassment by one of them. The very phrase “closing ranks” comes from a battlefield tactic, and even today, military capability depends on units becoming so close-knit that soldiers are willing to die for each other. But if the culture that may have shielded Agnes Wanjiru’s killer is to change, the armed forces must make it safe for them to expose rogues in their midst.

Memories will have faded over the nine years since Agnes’s death, but surely not enough to make a fair trial impossible. There is no excuse now for not granting her family the justice they have long been denied. But almost as important is an explanation of why it was denied; who knew what really happened that night in Nanyuki, how it was covered up, and what the Ministry of Defence will do to ensure such a thing never happens again.

Macron has an answer to populism

Emmanuel Macrons coalition of the willing

Chinas digital rise is not inevitable