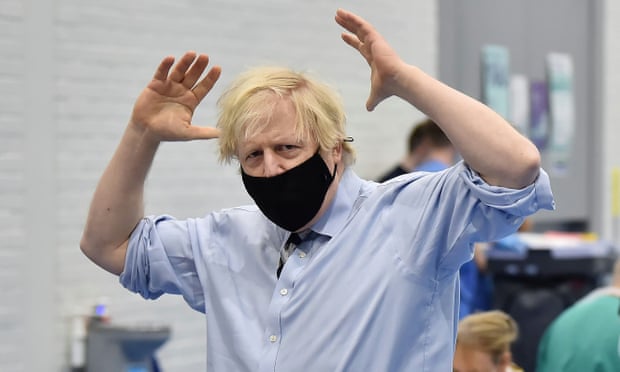 Boris Johnson likes to imagine history pivoting on the palms of heroic individuals. That is the thrust of his 2014 book, The Churchill Factor, which depicts Britain’s wartime leader as a man predestined for greatness by unique qualities in his character. The author drops unsubtle hints about his own uncanny possession of a similar spirit.

The pandemic tells a different story. If there has been a “Johnson factor” it will not be recorded as the key to national salvation, even by generous biographers. Too many people have died who might have lived if different decisions had been taken, or had the same decisions taken without procrastination. The current death toll exceeds 125,000, making Britain one of the deadliest battlefields in the global struggle against Covid. Why?

There are factors that are not political, and political factors that go beyond what was said in a Cobra meeting (or whether the prime minister bothered to attend that day). There is population density and the capital city’s status as a global hub. There are demographic trends and patterns of ill health. The emergence of a more transmissible strain of the virus in Kent was a significant stroke of bad fortune. There was also a decade of public sector cuts, degrading the infrastructure that gives a nation resilience in case of civil emergency.

The tinder was dry, and Downing Street then ignored the smell of smoke when the fire caught. The prime minister’s first instinct was to hope the whole thing would blow over. Even as the flames grew, he was complacent. His view, broadcast on 3 March 2020, was the opposite of good advice: “We should all basically just go about our normal daily lives.” We should not have. It has since been reported that, in private, he suggested ignoring the virus.

Anonymous government sources have acknowledged that Johnson now wishes he had locked England down “harder, earlier and faster”. In the same breath, those sources also complain that scientific advisers, to whom the prime minister deferred, underestimated the threat. Recriminations bounce around Whitehall, batted between ministers and civil servants.

Officials say that Johnson was ideologically allergic to anything that made a nanny of the state, and was unwilling to go public with portentous warnings that would undermine his optimistic, ebullient persona. Ministers complain that state structures were inadequate; that they were given an obsolete dashboard of rigid, rusty levers. The civil service riposte is that the machine is programmed by its political masters. It cannot fill gaps where leadership is absent.

These issues should all be aired in the inquiry that Johnson vaguely promised last July. He declared himself ready to learn lessons, but only at some point in the future. That point is still unspecified.

The answers provided by any investigation depend on the questions it is set and the powers it is given. Last September, a parliamentary committee recommended a statutory public inquiry with authority to subpoena witnesses, compel disclosure of evidence and hear testimony under oath. The committee also thought the optimal moment to begin was immediately, given that such things take time. The government disagreed.

Johnson has said only that an inquiry should be “independent”, and the colour has already drained out of that faint pledge. In January he warned that the time was still not right, that close examination of the record would be an unsuitable use of “vast state resources”. He offered his own evaluation: “We truly did everything we could.” The death toll had by then reached 100,000.

It is true that thorough accounting does not come cheap. The Bloody Sunday inquiry cost £211m. The vastness of the pandemic – its intrusion into every aspect of the national life – raises an intimidating volume of questions. Setting coherent parameters would be tricky, but not impossible.

Many bereaved families will want to satisfy their suspicion that official negligence was an accomplice to the virus. That is a different agenda to the one that seeks technical recommendations to upgrade civil service operating manuals for future reference. (It turned out, for example, that there were no relevant protocols to deal with the prime minister nearly dying in office.)

And the rest: why protective equipment was in short supply; whether the contracts to restock were channelled to government cronies; the discharge of infected patients into care homes; the test-and-trace system, with a £37bn budget and an effect too marginal to be observed when investigated by a committee of MPs; the app that became a ministerial vanity project; all the U-turns; the insistence on easing restrictions for Christmas when infection data signals were flashing red.

That is enough to keep an inquiry busy even before it turns to the impact of lockdown: conditions that went untreated because hospitals were dedicated to Covid; the cost of empty classrooms and abandoned exams; the hollowed high streets.

If Johnson could limit an inquiry’s terms of reference to procurement of vaccines and the pace of their rollout, the hearings would have already started. But there is less clamour for answers when the question is how things went so right. There are useful lessons to learn from good government too, but that story will be told willingly and repeatedly. It will not have to be subpoenaed to appear.

Johnson hopes the national mood will be so buoyed up by the efficient delivery of shots into arms that bleaker memories will be effaced. Opinion polls show a tonic effect already to the Tories’ benefit. The prime minister wants the record of his failure overdubbed with celebration of his success.

That is frustrating to the opposition, who would like to see the government made formally culpable and chastened. But wishing political damage on the Tories is no better a reason to demand a public inquiry than wanting to avoid that damage is good grounds to refuse one. For most people, the pandemic is not a question of party allegiance, or political at all, in the sense of electoral rivalries fought out in Westminster.

That does not mean there is no interest in the truth. It is possible to see blameless tragedy and harm aggravated by incompetence reflected on different surfaces of the same event. The urgency in setting up an inquiry is not to accelerate the settling of partisan scores, but to secure for posterity the foundations of fact on which the history of the pandemic will be written. It is to begin the forensic work of excavating the site before it is flooded with propaganda and reshaped to the contours of a myth, narrated by the prime minister in the first person.

Johnson will want to draw a line and move on, which is what he does best. His career is a palimpsest of such lines scrawled over lapses in judgment and derelictions of duty. That is the “Johnson factor” that historians will one day study with fascination. It is an extraordinary quality, but far from a heroic one.

Italy can’t get no respect