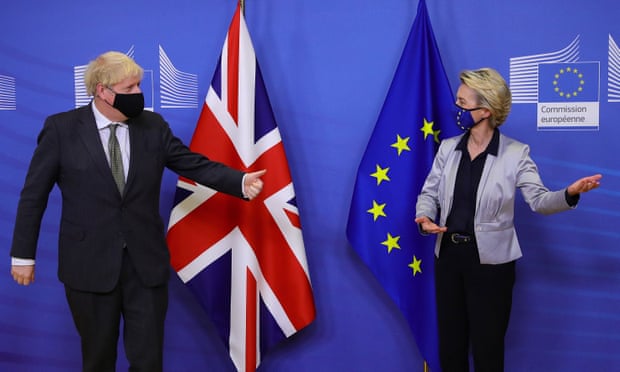 Can it really be just three entire years and three entire days since Michael Gove said of a Brexit deal: “The final whistle has blown, and the prime minister has won”? Either way, I see the Brexit talks have moved into the threatening-suicide-if-your-ex-doesn’t-do-what-you-want stage. On Thursday evening, Boris Johnson took to the airwaves to warn that with negotiations due to end on Sunday, there is now a “strong possibility” of a no-deal Brexit.

This mood of constructive and responsible toy-throwing was duly echoed across today’s front pages, with a personal favourite being the Daily Express’s splash headline: ALL WE EVER WANTED WAS OUR FREEDOM. A phrase it’s incredibly hard not to imagine being sobbed by a man in his pants being led away by police officers.

ALL WE EVER WANTED WAS OUR FREEDOM. And to have access to the single market; and to prosper mightily; and to be able eat a bunch of grapes while walking round Tesco then kick off when challenged at the till; and to be able to use the weights room without paying gym membership; and to have some me-time; and to explore an open relationship just for a bit, you know; and to get a Regret Nothing tattoo; and to try surfing and ayahuasca; and to sleep in the spare room with our new girlfriend because flats are expensive and we need one with a garage for the superbike; and to have a child support holiday so we can go to Spain and get our heads together; and to dress in a Spider-Man costume and climb on top of a women’s refuge and just feel understood; and to come within less than 100 metres of you. ALL WE EVER WANTED WAS OUR FREEDOM.

Still, let’s warm our hands on the binfire and remind ourselves how it’s come to this. On Wednesday, much was made of Boris Johnson’s ham-acting dash to Brussels, with some saying that it had come down to his ability to charm the EU. Ah, the old Johnson charm. If I had to alight on its defining characteristic, I’d plump for “doesn’t travel well”. The prime minister is like one of those trolleys that stops working once you reach the perimeter of the supermarket car park. As soon as he passes the white cliffs of Dover, Johnson no longer functions as the repository of a hundred buy-one-get-one-free delusions about Merrie England, and becomes useless.

Certainly even official records of the Brussels visit tend toward the disturbing. I will not unsee in a hurry the arresting photo in which Johnson and his chief negotiator, David Frost, are grinning like a pair of competition winners next to European commission president, Ursula von der Leyen, and her negotiator, Michel Barnier. Trussed up in some other guy’s suit, Johnson suddenly appeared to have the precise physique of Danny DeVito’s Penguin from Batman Returns. Though sadly not the brains.

Received wisdom seems to be that this is all theatre – designed to show that the UK, which has rapidly ceased to be a serious country, is serious about its threats. If there is a flaw to this plan – and really, it’s such a tiny cavil – it’s that our prime minister is a liar of international repute. Possibly even intergalactic. For Boris Johnson, lying is not second nature: it is nature. Even on the occasions he wants to tell the truth – a rarity, but imagine it momentarily aligning with his self-interest – he has to make a vast, almost physical effort to override his psychiatric biology. It’s like watching a cat try to bring up a six-kilo hairball.

For most of the time, the prime minister exists in a space far beyond truth, a horror category all of its own. To hear he’s going to make a statement is to anticipate a catastrophically messy haemorrhage of actuality; the mere opening of his mouth should be seen as a truth-prolapse. (Come on – it wouldn’t be Christmas without a Boris Johnson body-shock section.)

As for arrangements to celebrate our historic final, final exit in three weeks’ time, there has been no word of any commemorative “end of transition” coins. Perhaps they learned their lesson last time. You’ll recall a whole lot of special 50p pieces were minted for 31 October 2019, then the UK unfortunately missed that unmissable deadline. But all was not lost, according to the Sun, which assured its readers that any coins bearing the wrong date “could be worth £800”. Yes … One euro will be worth £800 at this rate. The unofficial Brexit slogan only slightly adapts Buzz Lightyear’s: “To parity – and beyond!”

One of Johnson’s chief justifications for no deal seems to be that he has the cabinet’s very strong backing for it. What? This cabinet? My God – in that case, do the opposite. If those missing links reckon it’s a good idea, the only sensible course of action would be an 11th-hour 180-degree collapse and immediate push for full federalisation and an EU army. The problem with Boris Johnson’s “top team” is that the only qualifications on which they were selected for hugely important jobs at this hugely important time are gurning loyalty to Brexit, and being largely housebroken. I say largely – the relevant box to tick on the nursery admissions form is the one that reads “can use the toilet independently but sometimes has accidents”.

I mean, honestly, call up a photo of the current cabinet. Look at their little faces. They are simply the lowest calibre things ever assembled round that table – including the chairs. There are seats of button-backed mahogany in that room that have given deeper thoughts to the implications of no deal than Priti Patel – and if the home secretary doesn’t like that assessment of her incapabilities, she’s welcome to come round and throw one at me.

So what now? Who knows. Only one thing is clear. If we do go no deal, Boris Johnson will be acting not to save the country, but to save face and his own career. It was ever thus, of course – but the stakes were never anywhere near this high.

Sales of thermal clothing rocket in response to Covid restrictions

In Ukraine, its no longer about little green men

Give populists a chance

How to exit the eurozone

How to exit the eurozone