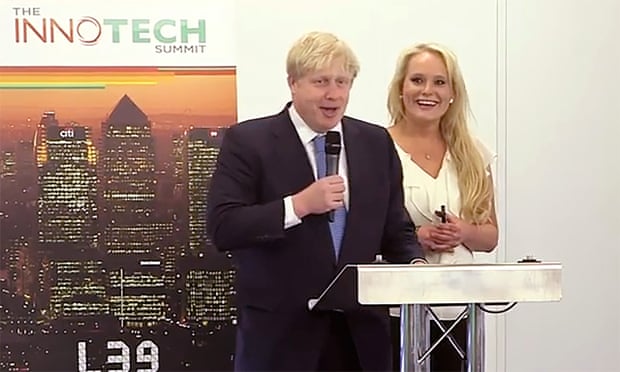 ‘I shall not say why and how I became, at the age of fifteen, the mistress of the Earl of Craven.” If Jennifer Arcuri’s new, extended account of her sexual adventures can’t compete for ambition or polish with the memoirs of Harriette Wilson, which caused a sensation in 1825, her recollections deserved better than to be ignored by the BBC, snubbed by the prime minister’s media supporters and only grudgingly appreciated by his critics. Was there really no political substance in this generous new evidence of behaviour so sleazy, reckless and ethically vacuous?

Maybe, as some have wearily suggested, only the very unsophisticated will still recoil from scenes like the one – detailed by Arcuri – that preceded Boris Johnson’s appearance between his wife and Princess Anne at an Olympics ceremony. “I couldn’t even find his sock.” These sort of things probably happen at the BBC the whole time. Same – yawn – with the panting mayoral requests (“Photo x”) when the lovers were apart. Given his long-advertised affectations, it’s admittedly no surprise the mayor recited Shakespeare with the much younger literature fan he was about to shag on the sofa, minutes before his wife arrived home. Though Macbeth is an unexpected choice. Which bit was it? “‘If it were done when ’tis done, then ’twere well it were done quickly’ – keep up Jennifer old girl, she’s due back any minute.”

But even if long exposure to Johnson has desensitised many to these horrors, the Sunday Mirror’s story made it unprecedentedly clear how unsparingly the prime minister applied himself, for years, to the pursuit of extramarital sex. When you appreciate, like this, the gruelling routine – from isolating the next target and furtively getting her number, finding meeting places, dodging security staff, downing the meals, reciting sonnet 29 (again), then dealing with the pregnancies, the discoveries, denials, domestic explosions, all of it, over and over, it’s not going to leave much time, is it, what with the Telegraph columns to knock off, plus a book, maybe even a child or six playing up? Factor in demanding histrionics of the kind Johnson reportedly enjoyed during the (denied) four-year affair with Petronella Wyatt and we’ve probably had it the wrong way round about his priorities. He’s not a top politician in thrall to priapism, but the reverse: a pound-shop libertine for whom public life is rewarding chiefly for its sexual opportunities, its wife-placating alibis and that most enticing of baits, high status.

After one dinner at an Italian place long overdue a blue plaque – “Boris Johnson, the ‘Conduit Street Casanova’, groped here 2005-2012” – he “screamed” for a kiss in the street: “This is my city, I don’t care.” As mayor, and then in government office, Johnson could play at being mad, bad and dangerous to know. Out of office, he’d be, what? Crispin Odey?

Other than divorce, the remaining threat to Johnson’s arrangements came, given an endlessly indulgent press, from the late Lord Nolan. In 1994, Nolan was tasked by John Major with rescuing politics from Tory sleaze. “We seek to restore respect for the ethical values inherent in the idea of public service,” Nolan wrote of the resulting Seven Principles: selflessness, integrity, objectivity, accountability, openness, honesty, leadership. Enforcement was another question. “Formal procedures have a role to play,” Nolan said, “but in the end it is individuals’ consciences that matter.” By the time George Osborne and David Cameron hastened to enrich themselves, this idea was already comical. We are now left with, on the one hand, Nolan’s faded sampler; on the other, Johnson’s expensively wallpapered, ever-expanding development of luxury Augean stables.

That Johnson is aware of Nolan is evident from a characteristically insulting answer to a question in 2009, after his questionable gift of a coveted London arts job to a devoted hack. “I support the Nolan principles. I support the Nolan sisters! I support Sidney Nolan! I do indeed.”

Now Johnson has Allegra Stratton to embody his contempt for accountability. After the Sunday Mirror revelations revived questions about preferential treatment and £120,000 of public funds, she said: “He follows the Nolan principles when conducting himself in public life.” Anyone familiar with the incoming Johnson principles of public life appreciated that, under revised principle 6, fabrication, Stratton was only doing her job. With his tribute to principle 1, greed, Johnson recently hinted at the existence of a parallel Johnsonian code, but it has taken Arcuri, with additional input from Cameron, the PM turned lobbyist, to bring home the thoroughness of the rewrite.

(As above, replaces Nolan’s selflessness.) Holders of public office should take decisions solely in their own interest or that of their friends/families.

(Replaces integrity.) Holders of public office should accept gifts from generous individuals and organisations likely to expect favours in return.

(Previously objectivity.) When making appointments, awarding contracts, etc, holders of public office should not allow merit to affect choices made exclusively to benefit themselves, their supporters, family or friends.

(Replaces accountability.) Holders of public office must not submit to scrutiny of their actions.

(Formerly openness.) Holders of public office have a duty to be as opaque as possible about their actions.

(Replaces honesty.) Holders of public office are expected to lie freely about any private interests relating to their public duties.

(Previously leadership.) Holders of public office should demonstrate by example their support for these principles, which apply to all aspects of self-enrichment.

Does this go far enough? If there are already glaring omissions from the Johnson principles of public life, it’s because Nolan never mentioned their opposites. Even in the previous age of sleaze, qualities such as diligence, courtesy and respect for human life were among those he quaintly took for granted in our public servants.

Bratislava is for losers

Italys not the new Greece. Its the new Argentina.

Dont put US bases in Poland