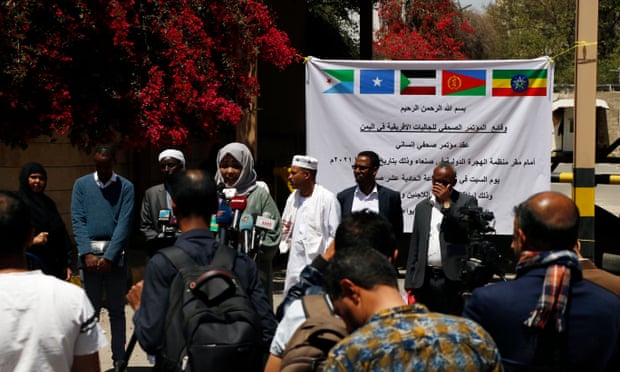 The UN has called for an independent inquiry into a horrific fire at a detention facility in Yemen’s capital Sana’a that left dozens of Ethiopian migrants dead and more than 170 injured.

Human Rights Watch said on Tuesday that the fire on 7 March occurred after Houthi rebels fired missiles into the detention centre where the migrants were protesting over their cramped conditions.

Calling for the inquiry, the UN special envoy for Yemen, Martin Griffiths, described the deaths as “extraordinarily horrific”, adding it was part of a dramatic deterioration across the country.

At least 6,000 migrants are detained throughout Yemen, and smugglers are holding hundreds, if not thousands of migrants, according to the International Organization for Migration.

Briefing the UN security council, Griffiths said the upsurge in fighting meant tens of thousands are on the brink of starvation, or at risk of displacement.

He highlighted both the Houthi offensive in the oil-rich province of Marib and a block on fuel imports into the port of Hodeidah since January by the Saudi-backed government based in Aden. Griffiths described the blockade as “simply unacceptable since it has contributed to the increase in cost of basic commodities, puts hospitals and services at risk”.

The Houthis, who are backed by Iran, control much of northern Yemen, including the capital Sana’a, but recently renewed their assault on Marib, which is held by parties loyal to the Yemeni government, triggering one of the most ferocious battles of the seven-year-old war.

Referring to the continued fighting for Marib City, Griffiths said: “Fighting forces on both sides have suffered heavy losses in this unnecessary battle. I see shocking reports of children increasingly getting drawn into the war effort and deprived of their future.”

A new US-led peace plan including a ceasefire and national talks put forward by the recently appointed US special envoy for Yemen, Tim Lenderking, was rejected almost immediately at the weekend by the Houthis. The chances of the peace plan gaining traction always seemed slim since the Houthis have banked so much on the capture of Marib.

But Griffiths described a military victory as “a mirage”.

He told the security council: “I am alarmed, to be very frank, that the mere fact of meeting across the table to discuss with us or with others or with each other the contours of ending the war is being framed by some, not by all, as a concession rather than an obligation, as a transaction rather than a priority.”

The joint UN-US ceasefire plan is largely focused on a nationwide ceasefire, the lifting of the blockade on Sana’a international airport and ensuring the unhindered flow of fuel and other commodities into Yemen through Hodeidah port.

The declining currency and lack of paid salaries led to protests in the southern port of Aden on Tuesday, during which the presidential palace was attacked and members of the cabinet including the prime minister, Maeen Abdulmalik Saeed, were removed for their own safety. Some of the hundreds of protesters carried the flag of the secessionist Southern Transitional Council.

The Houthis have been careful not to close the door on talks. Houthi official Mohammed Ali al-Houthi said on Monday that US secretary of state Antony Blinken’s comments about supporting a Yemen free from foreign influence are “positive”. He said the US should back up its intentions by ending its involvement in military operations carried out by the Saudi-led coalition against his group.

Johnson wants to move on from Covid – 125,000 deaths shows why we need an inquiry

US to Irans Rouhani: We will ensure freedom of navigation in Strait of Hormuz