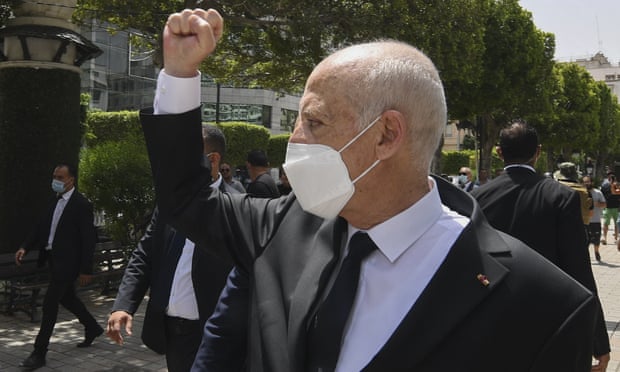 Saied also suspended parliament for 30 days on 25 July, and has since dismissed four ministers and other top officials.

The president has dismissed accusations by the largest party in parliament that he staged a coup.

He insists that he acted under the constitution, which allows the head of state to take unspecified exceptional measures in the event of an “imminent threat”.

The UGTT said late on Tuesday: “We call for speeding up the appointment of a head of government” and “a smaller and harmonious rescue government”.

It said any delay in forming a new government risked worsening the political vacuum in the north African country.

It would also “make it difficult to emerge from the current social and economic crisis”, said the UGTT, which backed the president’s move last month.

Tunisia is suffering one of the world’s deadliest outbreaks of the Covid-19 pandemic.

It has recorded more than 20,000 deaths from a population of about 12 million.

He later fired the defence, justice, economy and communications technology ministers, as well as top officials.

New economy and communications technology ministers were named on Monday.

On Tuesday, Saied dismissed the governor of the Sfax region and Tunisia’s ambassador to the US, without saying why in either case.

Last month, the UGTT – which played a key role in the 2011 Arab spring uprising – said Saied had acted “in accordance” with the constitution to “prevent imminent danger and to restore the normal functioning” of the state.

While urging the speedy formation of a new government, the union body’s latest statement also said Saied’s “exceptional” measures were a response to the demands of the people.

It called them “a definitive solution to the complexity of the crisis the country is going through in the absence of any other solutions”.

The president’s move has lost him little popular support. But his main adversary, the Islamist-inspired Ennahda party, accuses him of staging a coup.

Divorce parties are now a trend in Saudi Arabia

Saudi Arabia to host next round of peace talks on Afghanistan