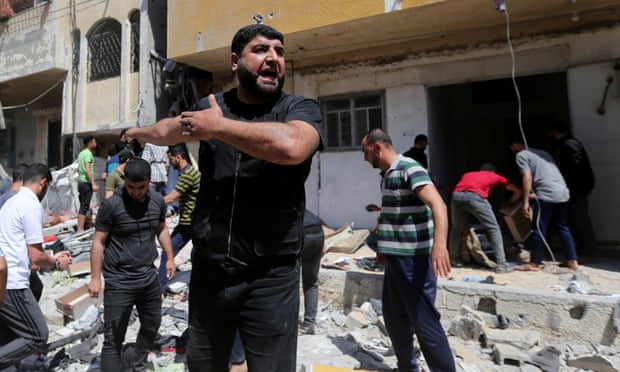 The tower blocks of Gaza City’s Rimal district, one of its wealthier neighbourhoods, look towards the sea and over the beachside al-Shati refugee camp out of which Hamas, which rules Gaza, first emerged in the late 1980s.

On Tuesday Israeli jets hit one of the towers, an eight-storey apartment block, where Hassan Abu al-Ata, deputy commander of Islamic Jihad’s Gaza Brigade, who is blamed for rocket attacks against Israel, was sheltering.

The killing of Abu al-Ata has been one of several targeting military figures from Hamas and Islamic Jihad in what Israeli security officials have admitted is a campaign of assassination.

From Khan Younis in Gaza’s south to Beit Lahia in the north close to the border wall, Israeli strikes have hit cars and houses, Hamas-run police stations and apartment blocks bringing at least one to the ground and filling the air with explosives and concrete dust.

It is the attacks on the apartment towers, however, that have brought back frightening memories for Gazans of 2014, when the city’s high rises were also attacked – a tactic under investigation by the international criminal court.

Samah Haboub, a mother of four children, described being thrown across her bedroom in a “moment of horror” by an airstrike on an apartment tower next door. She and her children, aged three to 14, ran down the stairway of their block along with other residents, many screaming and crying. “There is almost no safe place in Gaza,” she said.

One of the blocks that was hit, residents said, was home to two apartments being used by Hamas’s interior ministry.

In Tal-al Hawa, a neighbourhood to the south of Gaza city, Saeed al-Khalil, 44, was injured when the residence next door to him was hit.

“A civilian apartment block next to my house was targeted without warning,” he said, referring to the practice known as “roof knocking” where Israeli strikes are sometimes preceded by a warning shot.

“Part of the house wall and glass fell on me and on my wife. I fractured my left arm, while my wife sustained wounds in her back and her legs. I spent the night in the hospital, and then took my four sons to my brother’s house in a neighbouring area.

“The sound of the bombing didn’t stop, and while I was in the hospital, I could not sleep. We were preparing to celebrate Eid [the end of the fasting month of Ramadan] but there is no Eid, just horror in the city and a lot of blood.”

The lack of warnings before strikes was raised by Yousef Al Hammash. On Tuesday evening he was forced to flee his home in Beit Lahiya with his pregnant wife and three-year-old daughter after his building was hit by a missile from an Israeli drone.

Hammash, who works for the Norwegian Refugee Council, said: “We thought the drone strike was a warning of a bigger airstrike, so we left as soon as we could. My daughter was crying all the time. She doesn’t understand what’s happening, we tell her it’s big fireworks.”

He returned to the apartment on Wednesday to fetch some clothes. While he was there, a missile struck the flat below. “It was a huge explosion, there was dust and smoke everywhere. The apartment was destroyed.”

In the streets on Wednesday most of the shops were closed, save for some selling groceries. The few venturing out were greeted by the sound of Israeli naval shelling and outgoing missiles.

The violence has sent a steady stream of casualties to Gaza’s hospitals. At one an Associated Press reporter saw five people dead and seven wounded, including women, from an Israeli airstrike that hit a car in the city.

For most Palestinians in Gaza once more an all too familiar question from previous rounds of fighting has reimposed itself: where amid the widespread strikes it is safe to flee to.

“I’m terrified,” said Fatima Ashour, 41, a lawyer “I can’t sleep and have a pain in my stomach and diarrhoea from the stress. I live in a house on the eighth floor and there’s a lot of glass in it, so I decided to move to my friend’s house in the Tal al-Hawa area.

Ashour added: “Unfortunately that area saw the heaviest bombardment last night, including homes, government offices and streets. I don’t know what the aim is. What the significance of all this violence and bombing is. There is no meaning but more bloodshed.

“They say here that all this is for the sake of helping Jerusalem. But why is there no one helping Gaza now? I don’t know what to say. There’s no safe place in Gaza.”

Saudi crown prince meets US presidents, tours Harvey-hit area as he wraps up visit to America