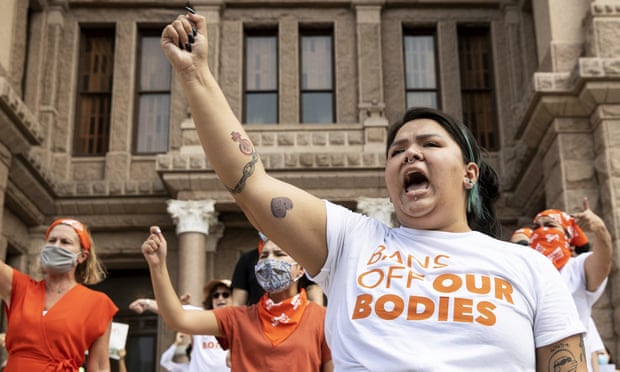 The new anti-abortion law in Texas is a “terrifying” reminder of the fragility of hard-won rights, pro-choice activists have said, as they warn of a “more aggressive, much better organised [and] better funded” global opposition movement.

Pro-choice campaigners have seen several victories in recent years, including in Ireland, Argentina and, most recently, Mexico, where the supreme court ruled last week that criminalising abortion was unconstitutional. Another is hoped for later this month when the tiny enclave of San Marino, landlocked within Italy, holds a highly charged referendum.

But Texas’s law, which bans abortions after about six weeks, once embryonic cardiac activity is detected, and does not make exceptions for incest or rape, has sent shock waves around the world, making pro-choice activists realise they can take nothing for granted.

Sarah Shaw, head of advocacy at MSI Reproductive Choices, said: “Even though we have seen little gains here and there, in some places, we can never, ever be complacent because we’re only ever really hanging on to these rights by the skin of our teeth.”

She said the Texas law was “really terrifying” because of the emboldening message it sent to other anti-choice governments and organisations, with the fact it had happened in the US giving it “a huge weight and legitimacy”.

“This is all happening in the context of a rising, much more aggressive, much better organised, better funded and much more legitimised opposition movement than we’ve ever seen before,” Shaw said.

Pro-choice campaigners say they have faced increasingly vocal opposition from organisations that started on the US religious right but have spread to other countries, such as 40 Days for Life, a group that distributes graphic and misleading leaflets to women outside UK abortion clinics.

Heartbeat International, a conservative US Christian federation, funds and coordinates a network of anti-abortion “pregnancy resource” centres, many of them in sub-Saharan Africa, to provide women with what it calls “true reproductive help”.

“It’s a transnational movement now,” said Shaw. “What we’re seeing is them [US organisations] exporting their playbooks and their money overseas.”

Attacks on abortion rights usually happen in countries where other human rights are under threat, according to analysts. Last year, more than 30 countries, many of them led by authoritarian strongmen or rightwing populists, including Belarus, Uganda, Hungary, Egypt and Donald Trump’s US administration, signed a non-binding anti-abortion document known as the Geneva consensus declaration. The text was also seen as being anti-LGBTQ, as most of the signatories had not legalised same-sex marriage and several prosecute their LGBTQ+ citizens.

In one of his first acts as president, Joe Biden removed the US from the declaration in January, as well as ending the Mexico City policy, known as the “global gag rule”.

Among the signatories was Poland, which is one of only three countries to have significantly rolled back abortion rights since 2000, according to the Guttmacher Institute. The other two are Nicaragua and the US.

In October last year, Poland’s constitutional tribunal ruled that terminations due to foetal defects were unconstitutional. Three months later, a near-total ban on abortions was imposed. Abortion is now only legal in the case of rape, incest or a threat to the mother’s health.

Meanwhile, human rights observers have said that a Nicaraguan law punishing abortion without any exceptions, passed in 2006, has simply forced women to seek unsafe backstreet terminations.

Marge Berer, coordinator of the International Campaign for Women’s Right to Safe Abortion, said setbacks were all too common, with breakthrough moments often followed by backlashes.

“My experience of this is one step forward, two steps forward, or one step back, 10 steps back,” she said. “And much of it, if not all of it, depends on who is the head of the government of the day.”

Berer, who has been involved in the pro-choice movement for almost 40 years, said the overall picture was brighter than it had been then: fewer deaths from unsafe abortions, and many more countries where terminations are legal.

But, she added, she was not hugely optimistic about the future. “There’s so much misogyny in the world. And I don’t know how anybody is going to make that go away,” she said. “For me, that’s the real problem. It’s that when misogyny takes over on a policy level, it’s very nasty.”

However, there is more hope among activists in Latin America, where the marea verde, or green wave, has swept through first Argentina and, last week, Mexico, where the supreme court struck down a state law that imposed prison terms for having an abortion. While it did not automatically legalise abortion, the decision is thought to set a binding precedent for the country’s judges.

Eugenia López Uribe, regional director of the International Planned Parenthood Federation, said the legal change was the result of “40 years of hard work” by campaigners, with mass demonstrations, backroom lobbying and “a mainstreaming” of women’s rights in public discourse.

She said the ability of the Catholic church to tell people what to do when it came to abortion and contraception had been greatly reduced. “What we know from different surveys … is that in reality Catholics … feel that this is a private decision that you have to do with your own conscience.”

As women in Texas bear the brunt of the law brought in by the governor, Greg Abbott, their Mexican allies across the border were planning to take the fight north, she added.

“The ‘green wave’ hasn’t reached the United States so this is a very good opportunity for [it] to cross the border of the Rio Grande and go to the United States. We can make it go even further. We’ve been used to thinking about it in Latin America. Now is the time for North America.”