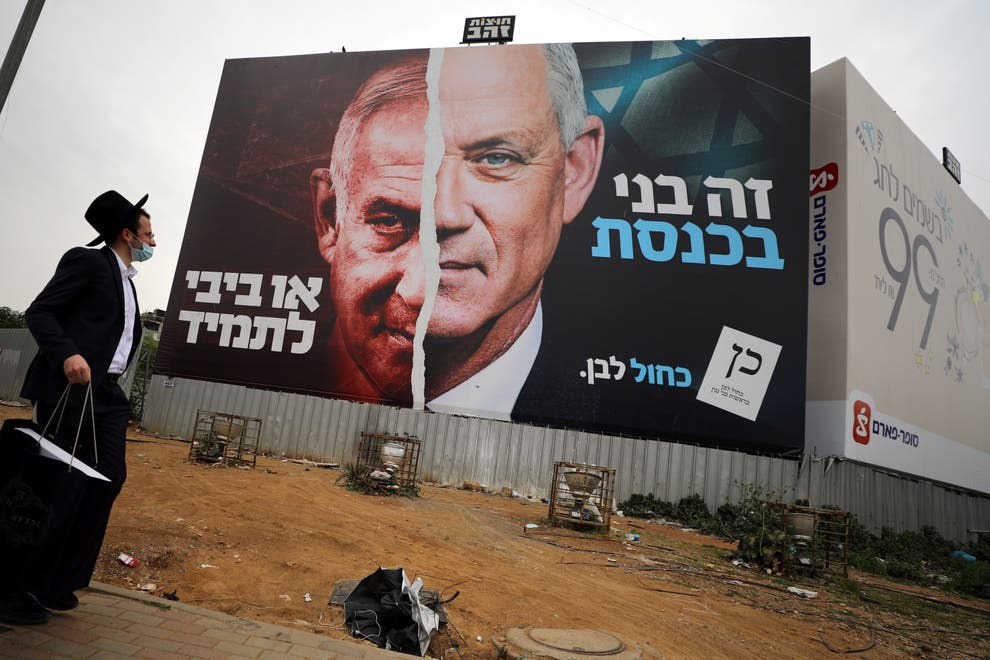 Israelis are set to vote in their fourth national election in just two years, with polls predicting a stalemate and possible fifth vote as the country remains staunchly divided over long-term leader Benjamin Netanyahu.

The final polls before election day on Tuesday show a tight race between two blocs: those that support Mr Netanyahu, Israel’s longest-serving premier, and those who are against him. The surveys suggest neither will reach the 61-seat majority needed to form a government, raising the spectre of an unprecedented fifth election plunging the country into yet another protracted political deadlock.

Campaigning under the shadow of a corruption trial and the pandemic, Israel’s five-term prime minister has struggled to shrug off stiff competition from rival nationalist and right-wing parties. They include fresh contender New Hope, which is headed up by Gideon Saar, who defected from Mr Netanyahu’s Likud party, presenting himself as a right-wing alternative.

With pressure mounting, Mr Netanyahu has, in a last-minute bid to rally voters, bemoaned the lack of seats needed to form a stable government while capitalising on his role turning high-tech Israel into what he dubbed a “vaccination nation”.

So far, it has not entirely worked.

The last opinion polls showed an uptick for Likud in the campaign’s home stretch, giving a Netanyahu-led coalition of conservative and ultra-Orthodox Jewish parties around 60 seats.

But the surveys also indicate that a potential, though unlikely, cobbling together of anti-Netanyahu left-wing, centre and rightist factions, is also hovering at around 60 seats. It would likely be led by Netanyahu’s strongest rival in the polls – centrist Yair Lapid of the Yesh Atid party.

Experts say everything will depend on smaller parties who have yet to confirm their allegiances, as well as undecided voters who could ultimately swing the outcome.

“We don’t see any big parties being the exciting new challenger protest party that sometimes have momentum near the end,” Dahlia Scheindlin, a prominent Israeli pollster, told The Independent.

“I think the most likely outcome is Netanyahu leading a coalition with a paper-thin margin, either because he manages to peel off a couple of members from the non-Netanyahu parties or he is able to secure a few more seats from the undecided voters.”

In Israel, no one party has ever won a parliamentary majority, and so instead the faction with the most seats is tasked with building a coalition. It means in a close contest like this one, election night results are only the starting point of frantic sideline talks to determine who ultimately takes power.

But relations with the White House have cooled since Democrat Joe Biden took office, removing chances of US diplomatic moves that could help rescue his chances.

It was noticeable that in place of the ubiquitous billboards of Mr Netanyahu embracing Mr Trump were towering campaign posters celebrating Israel’s successful vaccine programme, which Netanyahu has taken credit for.

Around fifty per cent of the population has been inoculated, far outstripping many countries in the world and seeing international praise heaped on Mr Netanyahu.

He has used a slew of media interviews and campaign rallies, as election day has neared, to highlight this.

“We are the world champions in handling the coronavirus … I have brought millions of vaccine doses and will bring millions more,” he said recently.

And so, rather than policy being at the heart of Tuesday’s vote, it is once again a bitter referendum on the divisive figure of Mr Netanyahu, who is both Israel’s longest ever serving prime minister but also the first premier to be indicted while in office.

Scheindlin says for the last 12 years in office he presented himself as “the state”, at one point holding multiple different ministerial portfolios, “doing as much as he can by himself”.

“It solidifies Israeli public opinion that no one else can lead the country,” she said.

But this, together with his three graft trials, has only served to fuel anger among his opponents, who have joined forces under the banner of anything (or anyone?) but Netanyahu.

The New Hope party, currently expected to take just 10 seats, believe that their leader Saar is uniquely placed as a right-wing leader that can unify the country. New Hope is predicted to come in fourth after Likud, which is predicted to win around 29 seats, and then centrist party Yesh Atid, which polls say may secure 19.

However, Yesh Atid is headed up by Mr Netanyahu’s staunchest opponent Yair Lapid, who is seen as too far left to be prime minister by the country’s powerful right-wing factions.

“It is not a question of popularity but maths,” says Jason Palman, a spokesman for the New Hope party.

“Gideon Saar stands fairly uniquely in this election as the one figure no one has said they wouldn’t sit under as prime minister – that’s how unifying he is,” Palman said.

“New Hope is genuinely the game-changer because it has given the right wing an opportunity to vote for change. There could be a right-wing prime minister who is not Netanyahu,” he added.

One deciding factor could also be another right-wing party: Yamina, which is headed up by former defence minister Naftali Bennett.

Nicknamed Israel’s new “kingmaker”, Bennett has so far refused to publicly confirm which side of the Netanyahu divide he will choose.

The last polls give Yamina around 11 seats (coming in third) which could nudge Mr Netanyahu over the line.

In a recent interview with Israeli website Ynet, Bennett responded to these claims, saying: “I want to replace Netanyahu, but the public will decide.”

But Yarden Avriel Lato, a spokesperson for the centrist Blue and White party, which in the last elections was Netanyahu’s main rival, said that Bennett will likely side with Netanyahu but make him pay a hefty “political dowry” in return, like giving his party senior positions in government.

She said her party saw the elections as an “existential battle” as Blue and White leader Benny Gantz, who is currently defence minister and alternate prime minister, “jumped on the proverbial grenade” when he joined a unity government with Mr Netanyahu. Mr Gantz went from commanding the biggest win in the last election to possibly not being able to gain enough votes to pass the threshold in parliament.

Blue and White is among four small parties, including the dovish Meretz party, that are now in danger of not receiving the required 3.25 percent of the vote, which would give them a minimum of four seats in the 120-seat body.

“We have been in this transition mode for over two years now,” she said of the constant cycle of elections. “Netanyahu is using all his power within the government to shift things to best suit his personal political interest.”

Another potential deciding force could be the Joint List, a coalition of the Arab-majority parties in Israel, and its breakaway Ra’am. There has been feverish speculation over whether they would join the anti-Netanyahu bloc, given they are expected to secure eight and four seats respectively. This is despite the fact that would be unprecedented as there has never been an independent Arab party in the ruling coalition.

Dr Yousef Jabareen, a Joint List member of parliament, told The Independent this would be unlikely given the right-wing policies of Saar’s New Hope party and the others that would form the anti-Netanyahu bloc.

“From a realistic perspective, reading the current political map it seems that the Joint List will be leading the opposition,” he said.

Do Jordan protests herald a new phase of the Arab Spring in 2019?