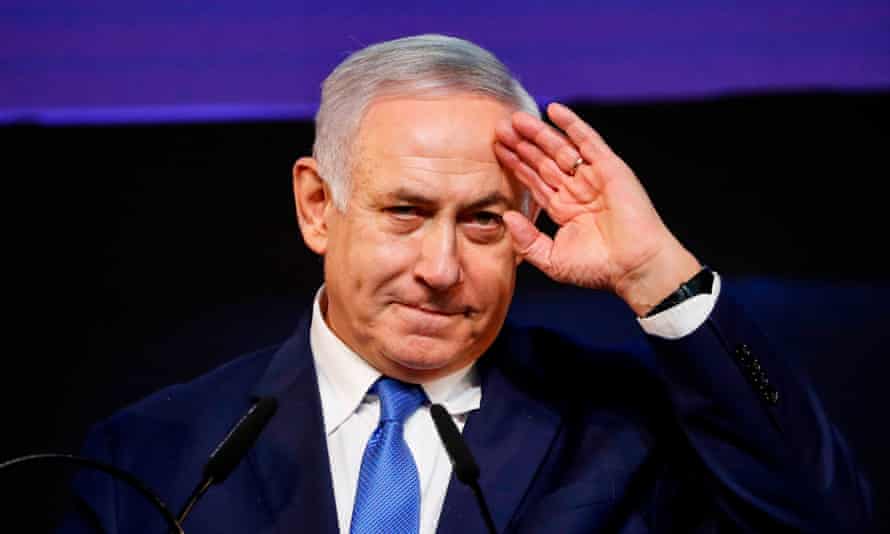 Israelis and Palestinians under the age of 30 have lived most of their lives with Benjamin Netanyahu as prime minister of Israel. First elected PM in 1996 aged 46, King Bibi – as he is known by supporters and critics alike – has since then never been far from high office, which he is due to now depart aged 71.

Fifteen years in power, including 12 consecutively, have seen him break several records. Netanyahu was Israel’s youngest prime minister, and became its longest-serving, surpassing even the country’s founding father, David Ben-Gurion.

Seen internationally as an uncompromising hardliner, Netanyahu’s domestic supporters consider him a hard-nosed nationalist. Many believe he will seek to reclaim power at some stage, though three current criminal corruption cases could stymie that effort.

A fluent English speaker with a resonating American accent and a master’s degree from MIT, Netanyahu grew to prominence as a face on US television in the 1980s, arguing Israel’s case as a diplomat.

In the 1990s, the former commando made his political debut as a key figure in the hawkish backlash to faltering peace talks between Israel and the Palestinians. The 1995 assassination of the prime minister who helped spearhead those efforts, Yitzhak Rabin, led to an early election a year later that saw Netanyahu and his opposing ideology come to power.

His lasting impact has been to move the country away from a position where the end of military rule over millions of Palestinians felt like a possibility – or, as some Netanyahu rivals argued, a necessity if Israel was to thrive. Today’s situation has changed to one of seemingly perpetual Israeli management of the entrenched occupation, which Netanyahu and other mainstream politicians intend to solidify through annexation.

“Netanyahu, who inherited the most favourable conditions for peace with the Palestinians, has never tried to grasp the opportunity,” wrote Anshel Pfeffer, an Israeli journalist and author of a Netanyahu biography, Bibi. “The only peace he has been willing to consider is one where Israel bullies the Palestinians into submission.”

In his first speech to the US Congress on 10 July 1996, Netanyahu made clear his guiding framework was for Israel’s place in the Middle East to be one of power, not compromise. “In our Hebrew scriptures, which spread from Jerusalem to all of mankind, there is a verse: ‘God will give strength to His people; God will bless His people with peace,’” he said. “This is the original, inspired source for the truth that peace derives from strength.”

Almost three decades later, Netanyahu has maintained his ideology, claiming it finally smashed the assumption that the Jewish state would remain isolated in the region unless it loosened its hold over the Palestinians.

After signing a historic agreement with the United Arab Emirates to establish full diplomatic ties last August – the first of several such deals – Netanyahu repeated his mantra. “A simple fact was proven anew: strength attracts and weakness repels,” he said. “In the Middle East, the strong survive, and with strength one makes peace.”

As a testament to the robustness of that message, the Israeli peace camp of the 1990s that he so scorned has been moved to the sidelines of domestic politics. Netanyahu’s successor, Naftali Bennett, is a former chief of staff to his predecessor and the two are ideologically aligned.

Still, just weeks before Netanyahu’s departure, his logic was questioned as protests, anger and violence erupted across Israel and the occupied territories, which his critics said proved the Palestinian crisis could not be ignored or managed away, even for self-interested reasons.

On the domestic stage, Netanyahu had long convinced the Israeli electorate that they have never been richer or safer, and his supporters laud him as “Mr Security”. He has intermittently lost power since he was first elected, including to the former Labor leader Ehud Barak and then a member of his own Likud party, Ariel Sharon, but always managed to claw it back.

Orit Galili-Zucker, the former head of Netanyahu’s political communications team, said it would be premature to suggest his career was now finished. “Netanyahu has not yet said the last word,” she said. “One should always keep this in mind when talking about his legacy.”

Her former boss, she said, had been in power “for so many years thanks to his charismatic personality, his propaganda abilities, his understanding of political marketing and the exercise of a government-backed, fear-based strategy”.

Seemingly an affable diplomat when speaking English, Netanyahu has played the dog-whistle alarmist in Hebrew to rally his nationalist base, infamously exploiting anti-Arab fears to win the 2015 ballot.

In 2019, he was again criticised as being overtly racist, stating Israel was “not a state of all its citizens”, in reference to the country’s minority population of Palestinian citizens – almost a fifth of Israelis. And in the past few years, in a bid to save his political career, he made election pacts with far-right Jewish extremists.

His rival and former allies accuse him of divisiveness and chipping away at Israeli institutions, including the judiciary, to maintain his position.

Galili-Zucker said: “Netanyahu seems to have memorised Machiavelli’s The Prince well: achieving the goal is sacred even if the path is immoral, public love is less important than fear, and ongoing propaganda ensures personal survival.”

Netanyahu has fought three wars with Hamas militants in Gaza, the latest of which ended last month. Although seen domestically as reserved when it comes to combat, Netanyahu oversaw the 2014 war when Israeli attacks killed more than 2,200 Palestinians, most of them civilians, according to the UN. That year marked the deadliest year for Palestinians since the occupation began in 1967. Seventy-three people, mostly military personnel, died on the Israeli side.

He has also entangled Israel in a brewing Middle East cold war between Saudi Arabia and Iran, siding with the former and regularly bombing Iranian forces stationed in neighbouring Syria.

Perhaps the biggest gift of his career was the election of Donald Trump, who handed Netanyahu a series of his key demands that were seen as punishing the Palestinians.

But during those years Netanyahu became increasingly dogged by a corruption investigation. And in 2019, he broke another record when he became the first serving Israeli leader to face criminal prosecution while in office. He is alleged to have accepted gifts from billionaires and traded favours with media and telecoms moguls.

Unlike one of his predecessors, Ehud Olmert, who stepped down after it appeared he would be indicted, Netanyahu has refused to leave power. Indicted in three separate cases, including on charges of bribery and fraud, Netanyahu faces more than a decade in prison if convicted but has vowed to fight the accusations, which he denies.

Two years ago, Netanyahu appeared to have successfully secured another term in office until disagreements erupted between Jewish ultra-Orthodox parties and the former defence minister and staunch secularist Avigdor Lieberman.

Ultimately, the prime minister was unable to bring the two sides together and his rightwing coalition collapsed. The event led to an extended political deadlock in which three more snap elections were held in September 2019, March 2020 and March 2021, as increasingly divided Israeli politicians were unable to form stable governments.

Netanyahu’s domestic popularity and his desire to hold on to power always remained at the centre of the crisis, and he lived up to his reputation as a political magician by keeping his rivals dithering and bickering.

But in his attempts for full control, Netanyahu isolated several of his partners on the right, including the incoming prime minister, Bennett. At the end of May, the opposition finally seized the opportunity and joined with disheartened former Netanyahu allies to take down their common enemy.

Published in 2018, the last chapter in Pfeffer’s biography considered what Netanyahu would leave behind when he left office.

“Perhaps Israel’s next leader will be a less-safe pair of hands and Netanyahu’s sad legacy will have been to pave the way for an even less tolerant and much more dangerous Israel,” he wrote.

“Hopefully, however, the next leader will embark upon a necessary process of healing and building afresh – because on the day after Benjamin Netanyahu leaves, his ultimate legacy will not be a more secure nation, but a deeply fractured Israeli society, living behind walls.”

This G7 reflects our G-zero world, ruled by self-interest instead of global ambition

Things to consider when visiting a Saudi home

Syria: Situation Report 1: Recent Developments in North-western Syria (as of 10 May 2019)

Saudi Cabinet lauds relations between Kingdom and the US