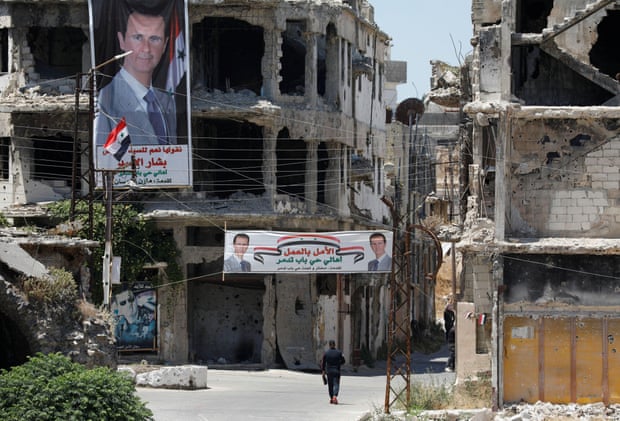 The manipulation of aid by Bashar al-Assad’s government in Syria is a unique and persistent form of control that needs to be urgently addressed, according to a new report.

Based on interviews with UN officials and humanitarian workers in Syria, the 70-page Rescuing Aid in Syria report has been released by a Washington thinktank, the Centre for Strategic & International Studies (CSIS).

“There aren’t many situations in our history, where someone who has committed mass atrocities to the level that the Assad government has, stays in power and controls the aid apparatus,” said the author, Natasha Hall.

The Assad regime has such a tight grip on aid groups’ access, including through visa approvals, that it had become normalised for relatives of senior regime officials to have jobs within UN bodies, the report says.

“How could you not know who these people are, when you have their CV in front of you? I find it a dereliction of duty,” one UN official said on condition of anonymity. “This is a massive protection issue, not only for the beneficiaries, but for other national staff you have working with you.”

A spokesperson for the United Nations Development Programme said: “The UNDP has found no evidence of having contracted with these entities, nor have we found any records of them in our vendor database. We are nevertheless carrying out a thorough internal review to verify that no such contracting took place either by UNDP or our subcontractors.”

The UN Office for the Coordination of Humanitarian Affairs (OCHA) said it “hires its staff based on merit, and on their ability to deliver”.

The spokesperson said: “Employees are expected to fully abide with humanitarian principles and the UN code of conduct. All UN staff are required to take an oath to act in the best interest of the UN and not to seek or accept instructions in regard to performance of duties from any government or other source external of the organisation, as mandated by the UN staff regulations.”

Relations are warming between the Assad regime and Arab states such as Jordan, the United Arab Emirates, Bahrain and Algeria – as well as with the US, which is reworking sanctions in the war-torn country. Meanwhile, the report says, there has been an increase in threats, arbitrary detention and torture of Syrian aid staff in the past year.

Employees of one local humanitarian organisation were detained and killed, and their relatives ordered to evacuate their houses or be arrested.

The threat of coercion and murder hanging over aid workers prevents independent monitoring of UN agencies and NGOs, the report said.
“If the Assad government is going to stay in place, which it seems a lot of governments are resigned to, this needs to be sorted out, because aid is probably going to continue to go into this hostile environment,” Hall said.

Beyond the diversion of UN food to the military, people directly responsible for human rights violations are benefiting.

The report found Mohamad Hamsho, a businessman close to the Fourth Division, an elite army unit, and the president’s brother, Maher al-Assad, had won UN procurement contracts to strip metals in areas retaken by the government and rework them for sale at his Hadeed Metal Manufacturing Company.

The UNDP allegedly contracted the Aleppo Defenders Legion, a pro-regime militia responsible for forcibly displacing residents, to clear rubble and rehabilitate the city they helped destroy, as outlined also by Human Rights Watch.

“When you consider the UN is one of the primary ways that money is going into Syria … [and] plays a huge role in revitalising the economy, it’s playing into the hands of [the regime’s] war economy.”

The OCHA spokesperson said the UN’s activities were governed by “core humanitarian principles of humanity, neutrality, impartiality and independence”.

They added: “Some governments, such as the one in Syria, insist that UN agencies work with a list of authorised implementing partners. However, we choose our partners from that list based on our own assessments of their capacity to deliver and following due-diligence processes.”

When aid was transported across lines of conflict or control, in both north-west and east Syria, known as cross-line shipments, there have been thefts and medical equipment has been distributed haphazardly, the report states.

Only 43,500 food portions made it to opposition-controlled north-west Syria in cross-line convoys compared with 1.3m delivered from Turkey in November. Supplies took four months to reach people in need as it sat in warehouses because the regime would not allow opposition-linked NGOs to distribute it, Hall said.

The manipulation of aid had grown in the past decade of war, and a thorough audit and evaluation of aid in Syria was necessary, Hall said.

“This is part of a systematic issue that needs to be resolved because it will be copied over and over again by other actors … who are learning lessons from what the Syrian regime has done,” Hall said.

‘Countdown to war’: how the papers covered fears of an imminent Ukraine invasion

Washington resumes talks with Taliban in Qatar, US source says