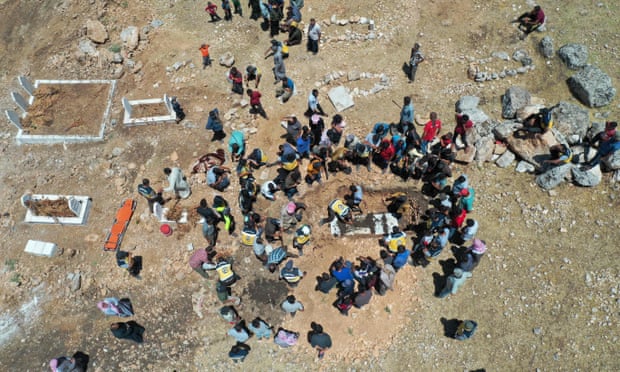 About 5,000 civilians in the north-west of Syria have once again been forced to flee their homes after a new wave of government shelling targeting the contested area, a local aid agency said.

At least 31 people have died since the beginning of June as Bashar al-Assad’s forces have hit civilian infrastructure in southern Idlib province, including a hospital, displacement camp school, and a civil defence headquarters. The number of dead includes three children and a civil defence worker who was killed in an attack on the town of Qastoun on Saturday.

“We were getting ready to start our morning shift when our centre was targeted with three highly explosive missiles. I joined the White Helmets [the civil defence rescue service] in 2014, and throughout those years I’ve never witnessed such destructive missiles.

“Our colleague Dahham al-Hussein was killed, and five of our volunteers were injured, including Dahham’s brother Ahmad,” said Samer Nassar, head of the group’s Qastoun centre. “The centre was completely destroyed and we lost a lot of equipment that we use to save lives and pull people from under rubble.

“Dahham is the 290th volunteer to have been killed on duty. Our hearts break for his family and four children he leaves behind. We will continue to carry his legacy through our work.”

The rise in violence over the last three weeks is the latest violation of a ceasefire deal brokered by Turkey and Russia in March 2020, saving the area from a brutal regime offensive that forced one million people to flee north towards the Turkish border.

“People are worried enough to have to leave their homes again … they are afraid of advancing forces on the ground as well, who will seize their villages,” said Rima Hallabi, a 21-year-old student. “There is no place to go. Idlib cannot handle massive numbers of people fleeing again.”

Idlib and the surrounding countryside is mostly ruled by Hayat Tahrir al-Sham, or HTS, an Islamist group which seized control from other opposition factions in 2019. While HTS has made efforts to distance itself from its al-Qaeda origins, the group tolerates little dissent and enforces religious edicts on the people living in its territory.

After 10 years of war the area remains the last pocket of Syria outside the regime’s control other than the Kurdish-held northeast.

The region is home to about 3.5 million people, around three-quarters of whom fled there to escape fighting in other parts of the country. Living conditions are dire, and have worsened since last year’s collapse of the Syrian currency, which sent food prices soaring.

About 75% of the population is now dependent on aid to meet basic needs, according to UN agencies. Covid-19 has also stretched healthcare services already decimated by war: a recent International Rescue Committee report found that 59% of civilians in northwest Syria have been directly impacted by attacks on hospitals and clinics.

59% of civilians in northwest Syria have been directly impacted by an attack on health care facilities.

The new fighting has been focused on the villages of Ihsim and Barah, on the southern edge of Idlib, where dozens of artillery shells fired by Syrian government forces over the weekend killed at least nine people. According to Taher al-Omar, an opposition activist, the dead included a local HTS commander.

Salem Abdan, Idlib’s health director, said: “June has brought many attacks on civilian homes and buildings, putting a lot of pressure on our hospitals, which are already struggling. The increase in attacks now, combined with the [UN security council vote on cross-border aid] approaching, poses a threat that the health and relief sector could collapse completely.”

On 10 July the UN is due to vote to renew the authorisation of aid delivery to north-west Syria through the Turkish border.

Closing the last direct aid corridor would put millions of already vulnerable people in Idlib at further risk, but Russia has repeatedly threatened to use its veto power to shut down all UN cross-border aid to areas outside the Syrian government’s control, saying it must instead be coordinated through its allies in Damascus.

“The world must stand with us, and aid across the Turkish border must continue,” Abdan added. “If [Damascus] is already bombing us now, why would they allow the entry of any medicine or aid?”

Afrin, another northwest town, was also hit by violence over the weekend: two separate artillery attacks attributed to the Syrian affiliate of the Kurdistan Workers’ party (PKK) killed at least 18 people after hitting a residential neighbourhood and hospital.

Afrin was held by Kurdish forces until it was seized by the Turkish army and Turkish-backed Syrian fighters early in 2018. The Syrian Democratic Forces (SDF), the US-backed umbrella of mainly Kurdish forces fighting in Syria, said Kurdish groups were not responsible for the attacks.