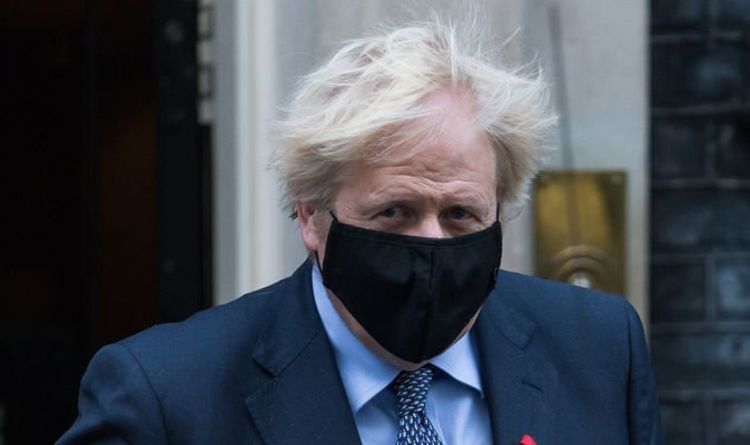 Prof Van Tam, questioned about the future, stressed the illness would never be eradicated, stressing it was highly unlikely people would be able to stop wearing masks in the near future He explained: “Those kind of habits will persist for many years and it may be a good thing if they do.”

However, Mr Johnson responding: “We want to get back to normal” before swiftly moving on, adding: “Anyway I have high hopes that the vaccine will make a significant difference to the way we live our lives.”

Prof Van Tam subsequently responded: “I do like to be challenged when I have perhaps not made myself clear and the Prime Minister has picked me up on this occasionally.”

As Mr Johnson attempted to interject, Mr Van Tam added: “That’s quite alright because it gives me a chance to clarify what I mean here.

“I do not think that the Government will continue to have to have to recommend social distancing, masks and hand sanitiser forever and a day.

“I hope we will get back to a much more normal world.”

“But the point I was trying to make was do I think possibly some of those personal habits for some people will last longer and perhaps become enduring for some people?

“Yes I think that is possible.”

Mr Johnson then said: “Who knows, who knows?”

The Prime Minister has made no secret of his desire for a resumption to normality, and earlier this year predicted this would happen by Christmas.

Scientists including Prof Van Tam have tended to be rather more cautious on the subject.

Speaking last week, he voiced his concern at the prospect of people flouting the rules during the holiday period.

He told Sky News: “I am certainly concerned that people should not tear the pants out of it.

“They should follow whatever rules are announced in due course by the Government.

“We are on the cusp potentially of being able to start some delivery of vaccines in the foreseeable future.

He added: “It will scale up slowly, but it will begin with the most vulnerable in our society.

“There is going to be a very sad irony if some people catch COVID-19 through not following the rules that would have been eligible for a vaccine in January or February.

“That would be a very sad irony indeed.”

Mr Johnson also told the news conference it would be some months before all the most vulnerable people received COVID-19 vaccines with England’s health service boss saying the bulk of the jabs would be given between January and April.

He explained: “It will inevitably take some months before all the most vulnerable are protected.”

He said: “The bulk of this vaccination programme, either through this vaccine, or hopefully others as well that will join it will take place in the period January through to March or April for the at-risk population.”

Gary Neville rages at Starmer for Labour vote abstention 'Your job's to stand as leader!'

‘Now I have nothing’: Tigray conflict has changed Ethiopia for ever, say refugees

May last a month .. A huge fire in an Iranian tanker

Palestine: IFJ demands justice following the killing of a journalist in Gaza