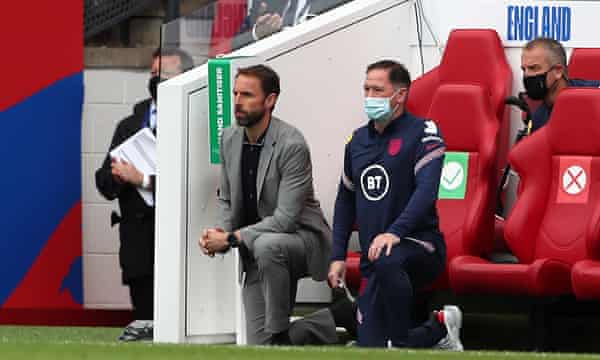 Gareth Southgate’s tactics in dealing with sensitive culture war issues should be followed by politicians, a leading US pollster has argued as he warned Britain faces a potential descent into American-style polarisation.

The England manager’s defence of his team taking the knee before games was praised by Frank Luntz as he released a report on political communications.

“He defines leadership,” said Luntz. “If a politician comes to me and say, what should I say, I tell them: be more like Gareth Southgate. He endorsed a common approach that people appreciated. That’s the definition of unity.”

Luntz contrasted Keir Starmer’s decision last year to circulate a photograph of himself taking the knee in response to the Black Lives Matters protests with Southgate’s defence of England players doing the same.

Calling an article by the England manager last month explaining his views “one of the best editorials I’ve ever read”, Luntz said the key was whether people believed such actions were being taken sincerely and not done for “performative” reasons.

“He wanted to speak in favour of something and not against it,” Luntz said. “And that is a great way to bring people together. It’s something politicians don’t understand – it’s what you are for, not what you are against.”

On cultural issues, Luntz said, Starmer faced a particular challenge in not allowing the debate to drown out other pertinent issues, whether he sought this or not.

Luntz, who spent decades advising the Republican party, joined the rightwing Centre for Policy Studies thinktank in the UK in May.

More widely, his report argues that British politicians must fight against a descent into a US-style culture war and that, while genuine divides exist, voters are ultimately more concerned by everyday matters such as paying bills.

The risks of a wider polarisation of political debate are highlighted by increasingly negative attitudes towards politicians in the research, based on two separate in-depth studies of 1,500 voters.

Asked to rank 18 descriptions of how British political leaders made them feel, split between positive and negative emotions, the top eight choices were disappointed, ignored, irrelevant, fed up, betrayed, forgotten, left behind and angry.

In the most visceral response – and one Luntz conceded in a briefing to journalists he had some initial misgivings at presenting as a choice – when voters were asked whether their overall attitude towards politicians could be summarised as “fuck them all”, 61% agreed, with only 20% actively disagreeing.

“These are really alarming findings,” Luntz said, adding that what voters most appeared to want from politicians was honesty. “Britain isn’t as bad as America – yet. But it’s clear that there are an awful lot of people who feel they’re being ignored.”

One reason for the divide appears to be a sense that everyday concerns have been forgotten. Asked what areas politicians understand least well, the top choice was the cost of living, with four of the top five connected to economic wellbeing.

But the polling also uncovered significant splits over cultural issues. Asked which “ism” was their greatest concern to people, the top answer for Labour supporters was racism whereas for Conservatives it was “woke-ism” – although the report also shows almost four in 10 voters are not familiar with the idea.

Another question asked people to nominate the greatest divide in modern Britain. For Labour voters the top answer was rich against poor, while for Conservatives it was immigrants against those born in the country.

Other analysis showed significant divides on age – Luntz said there was “a chasm” in attitudes between those under and over 50 – and in location. However, rather than being a north-south divide, a far greater division was between those who live in cities and people in towns or rural areas. Asked if Britain felt invested in their future, 46% of city dwellers agreed, against just 20% in towns or the countryside.

International Conference In Qatar to End Impunity of War Criminals