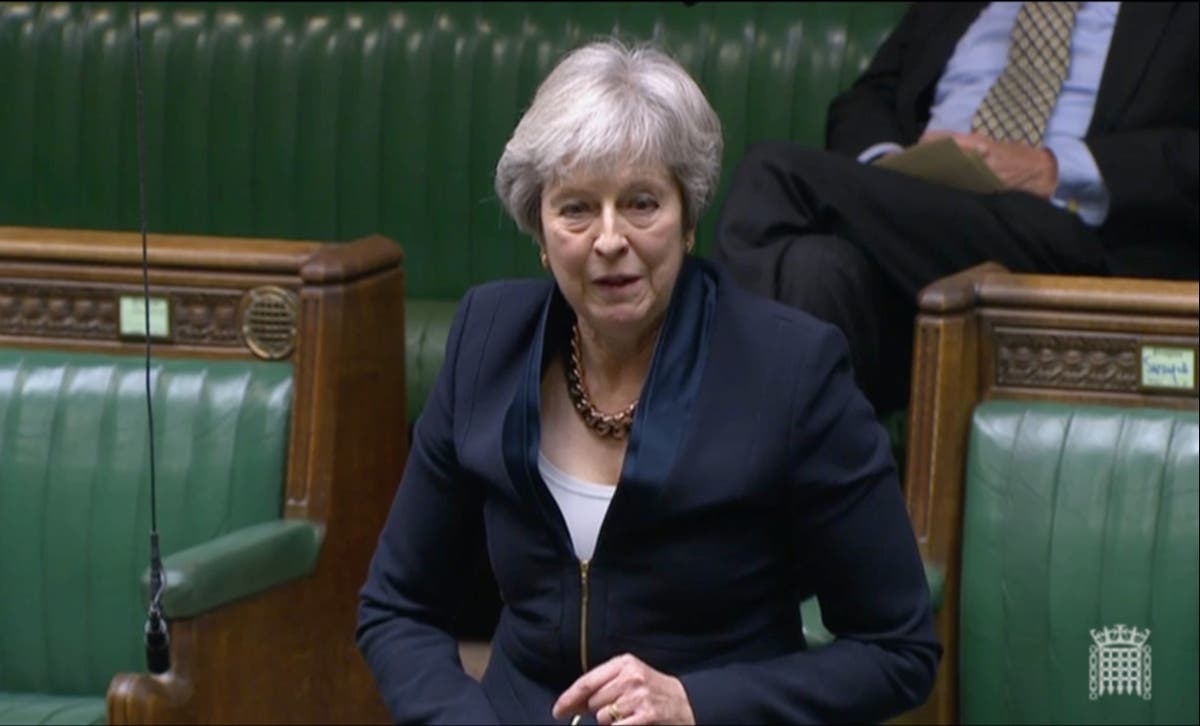 Theresa May has blasted Boris Johnson’s government for a “misplaced, ill-judged and just plain wrong” attempt to save Owen Paterson from punishment for sleaze, telling MPs that the botched attempt to dodge standards rules had damaged the reputation of parliament.

The former prime minister was speaking shortly before MPs approved the standards committee report which recommended a 30-day suspension for the former Shropshire North MP for lobbying on behalf of companies paying him £100,000 a year.

MPs finally approved the motion to scrap the government’s botched reforms that sparked Westminster’s sleaze row without the need for a formal vote – shouts of “ayes” in the chamber were enough to ensure it was approved on Tuesday.

Mr Johnson’s attempt to sneak the U-turn through without fanfare late on Monday night had been thwarted by an objection from Tory MP Sir Christopher Chope, forcing a full debate in the Commons this afternoon.

Ms May defied a three-line whip imposed by Johnson on 3 November by abstaining on a motion to set aside Mr Paterson’s punishment and set up a Tory-dominated committee to rewrite the Westminster rules on sleaze.

And she used today’s debate to turn her fire on her successor’s attempt to “effectively let off” Mr Paterson after he had been found guilty of paid lobbying. In a scathing judgement, the former PM said that the findings against Mr Paterson were “clear and fair”.

Ms May said: “Owen Paterson broke the rules on paid advocacy and the attempt by right honourable and  honourable members of this House, aided and abetted by the government, under cover of reform of the process effectively to clear his name was misplaced, ill-judged and just plain wrong.”

The ex-PM said that a vote today to confirm the judgement against Mr Paterson and to overturn the creation of the new committee “will be a step in the right direction, but it will not undo the damage that has been done by the vote of 3 November.

“And let’s be clear, this is not a party political issue. damage has been done to all members of parliament and to parliament as a whole.”

Ms May said that the government should now “urgently” consider proposals from a 2018 report by the Committee on Standards in Public Life, which would ban paid consultancy jobs.

No sanction can be imposed on Mr Paterson as a result of today’s vote, as he quit as an MP shortly after Mr Johnson’s humiliating U-turn left him exposed to punishment. But the vote to approve the report into him effectively acts as a marker of the House’s disapproval of his behaviour.

Downing Street was today forced to confirm that Commons leader Jacob Rees-Mogg still has the confidence of the prime minister, after the ally of Mr Paterson admitted that he had encouraged Mr Johnson to back the abortive scheme to save Mr Paterson from suspension.

Mr Rees-Mogg expressed “regret”, telling the Commons that the move was a “mistake”. He said that ministers’ judgement had been “clouded” by sympathy for Mr Paterson over the suicide of his wife last year.

“I think it was simply the tragedy that afflicted Mr Paterson coloured and clouded our judgement – and my judgement – incorrectly. It is as simple and as sad as that,” said the Commons leader.

The SNP’s shadow leader for the Commons Pete Wishart said Mr Rees-Mogg had “defied political science” by surviving the scandal – suggesting he should have quit over the botched plan to rewrite conduct rules.

Labour’s Stephen Timms described it as “an extraordinary failure of moral leadership”, asking why ministers did “not recognise the brazen wrongdoing of their colleague?”

And Labour’s shadow Commons leader Thangam Debbonaire told MPs that the government had treated the standards rules as “an irksome bother that you get your mates to change when you’re found out”.

Meanwhile, the veteran Tory backbencher Sir Christopher was unrepentant about his dramatic “objection” to the motion on Monday evening, after angry Tory MPs questioned his behaviour.

“It is important for the house of democracy to debate this issue – I’ve got no regrets about that whatsoever,” he said, before going on to defend his former colleague Mr Paterson.