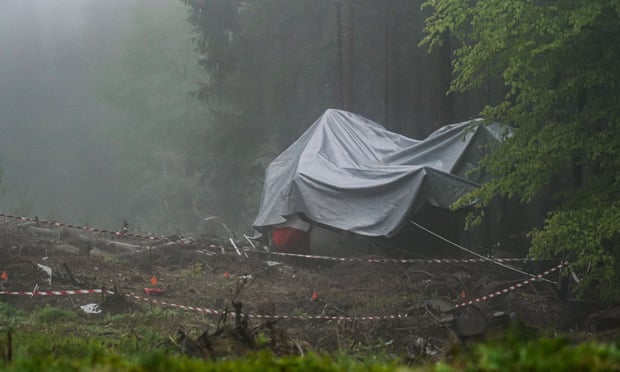 The emergency brakes on a cable car that crashed in northern Italy on Sunday, killing 14 people, had been “tampered with”, prosecutors said as three people were detained early on Wednesday morning.

The three people detained, who include the owner of the firm that manages the Stresa-Mottarone aerial tramway near Lake Maggiore in the Piedmont region, are alleged to have made a “conscious gesture” by “tampering” with the emergency brakes in order to “avoid disruptions” to the cable car service, Ansa reported, citing the chief public prosecutor, Olimpia Bossi.

The cable car system had “anomalies” since resuming service in late April, it said. “The [cable car] had been travelling in that way for several days and had made several trips,” Bossi said.

The two others detained include the director of the tramway’s management company, Ferrovie Mottarone, and the operational chief.

The cable car had been carrying 15 people on the 20-minute ride between the resort town of Stresa and Mount Mottarone. It was a few metres from its destination when it plummeted 20 metres into the woods below, shortly after midday on Sunday.

A five-year-old boy who is in intensive care at Regina Margherita hospital in Turin was the sole survivor of the tragedy, believed to have happened when a lead cable broke and the emergency brakes failed to activate, causing the cabin to hurtle backwards before falling.

The child’s parents, who are Israeli nationals resident in Italy, his younger sibling and his great-grandparents were all killed. The other victims, including a six-year-old boy, were Italian and one man who was born in Iran and lived in Rome.

The service had resumed on 25 April as Italy eased coronavirus lockdown restrictions. Technical checks were done, including a check on 3 May to “remedy inefficiencies”, but they had not been “decisive” in resolving issues, investigators said.

In order to avoid delays to the service, a device that deactivates the emergency brakes was kept in place. Had the emergency brakes activated, they would have held the cabin steady after the cable snapped. The move was made “in the belief that a cable breakage could never have happened”.

The system, which opened in 1970 and is owned by the local authorities, was closed in 2014 for major renovation works carried out by the Alto Adige-based Leitner di Vipiteno, before reopening in 2016.

Leitner di Vipiteno said on Monday that a series of checks had been carried out over the past seven months, starting with the yearly magnetic inspections on the primary cables of the lift in November 2020 and followed by further checks on safety components and braking systems between late March and early May.

Cabins can ordinarily hold up to 40 people but passenger capacity was reduced due to coronavirus restrictions.

Doctors began the process of waking up Eitan Biran, the child in hospital, on Tuesday and said last night the first signs from him were “positive”.

‘It’s cooler to hang Lennon’s guitar than a Picasso’: pop culture wins out at auctions