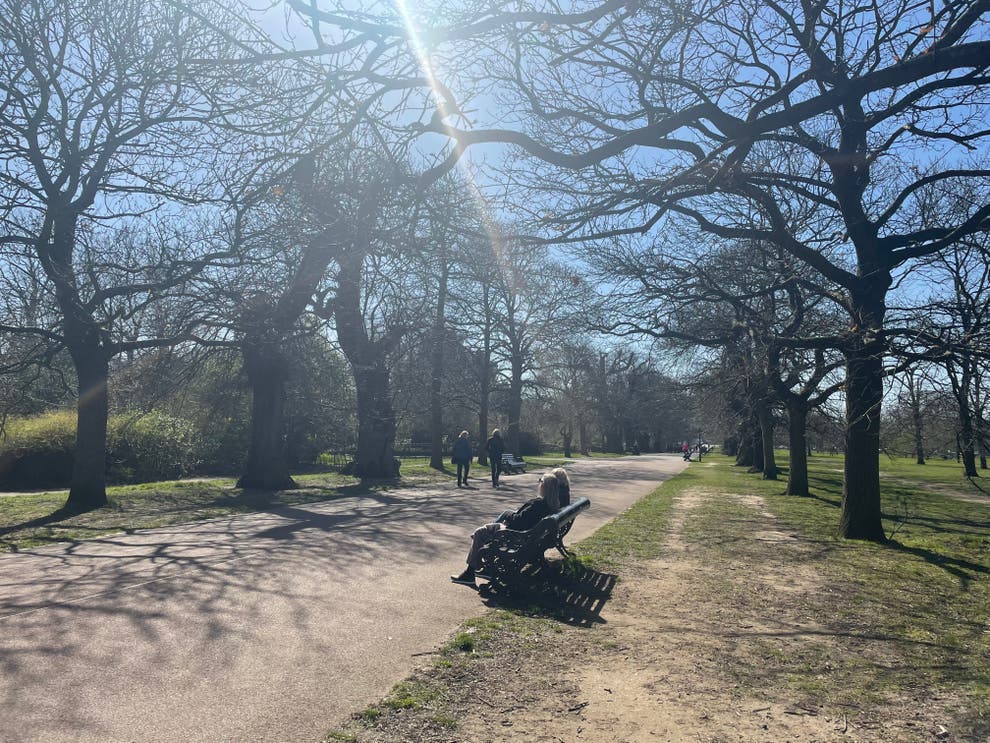 Up to six people or two households are now allowed to meet in outdoor spaces or in private gardens as England moves into the next phase of the government’s roadmap for easing lockdown.

The change in rules – which also switches from a ‘stay home’ message to ‘stay local’ – has been welcomed by many people after a long and difficult winter lockdown.

However, in London on Monday, people appeared to be largely backing Boris Johnson’s avowed “cautiously optimistic” approach to the relaxation of virus control measures.

In Greenwich Park, small groups of people were seen taking walks, setting up picnics or sitting on benches to drink coffee and chat.

Margaret and Helen, both in their 50s and having each received their first dose of a Covid vaccine, told The Independent they had been meeting regularly in the park to walk their dogs but have made plans to meet friends from other households this week.

Margaret said: “It will be really good to meet people again, especially with the weather getting better. Lockdown has been lonely, and this third one was particularly difficult.”

They noticed that throughout the third national lockdown, people were “sticking to the rules less”.

“People don’t swerve as much when walking past one another now,” said Helen. “I think everyone’s quite tired of it now, it has been very long and hard. We’ve been lucky to live near [the park] and be able to get outside, others have not been so lucky.”

Helen’s 25-year-old daughter is raring to get out and socialise, she said, and has been making reservations in bars and restaurants in anticipation for them opening up again in April.

“But I just urge her and other young people to err on the side of caution, because people thought Covid was limited to certain generations, but now we know it affects everyone,” she said.

“My daughter’s had two friends who had Covid-19 and are now suffering from long Covid. It’s not going to go away.”

Parvin Yunus, a grandmother originally from Calcutta, said she is “really excited” to see her children and grandchildren again – but agreed that people still need to be careful.

“The sun is shining today, I am warm and happy and so excited that I can see my grandchildren soon,” she told The Independent.

Ms Yunus said she was “very depressed” during the winter months, but she is hopeful for the future.

“We are lucky to be here in England. Even though I lost my uncle in Manchester to Covid, I still think Boris Johnson has done a great job, because he gave people financial support. He could have acted on locking things down sooner, but overall I think it has been a good response.”

But others criticised the lockdown restrictions, saying that making overseas travel illegal is “unfair” on immigrants.

Under current rules, all international travel is banned except for “legally permitted reasons”, which include work, education, and medical or compassionate grounds. Anyone trying to travel without good reason faces a £5,000 fine.

Sisters Maria and Rosie Boroica, from Romania, said that next month marks two years since either of them have been able to return home to see their family.

“We were meant to go last year, but obviously we couldn’t. Now we have no idea when we can go at all,” said Rosie.

Maria, who said she struggled with depression during the current lockdown, said she did not think the restrictions were relevant as “people have already been breaking the rules and meeting up”.

“I think it would be really hard to keep the rules for much longer, because we need the enrichment we get from socialising,” she said. “I crave social interaction, I don’t really know who I am anymore.

“We have to learn how to live with Covid instead of trying to postpone life going back to normal. I came to London 10 years ago thinking there are so many freedoms, I could really thrive – but now it’s the opposite.”

Both Maria and Rosie are looking forward to seeing their friends again from Monday, but Maria said the UK government “needs to acknowledge that restrictions are not a solution”.

The ban on international travel also affects local plumber Alex’s 13-year-old daughter, who is Swedish and has been unable to see her grandmother in Sweden since Christmas 2019.

“I can’t wait to buy a pair of trousers inside an actual store,” he said. “No more online shopping for me. I hate it now.”

Goodbye puffer jacket! How to dress up after a year in leggings and loungewear

UNHCR – 65 reported drowned after shipwreck off coast of Tunisia