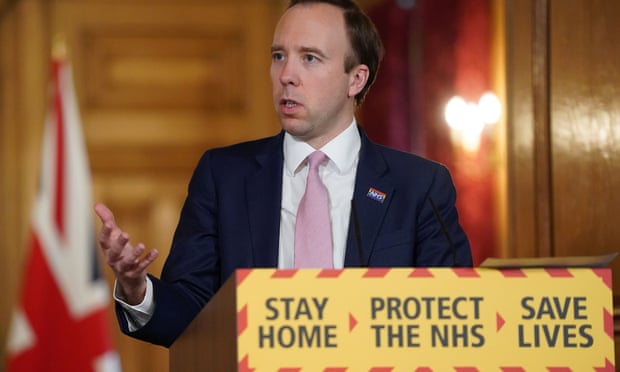 The government was operating an illegal “buy British” policy when it signed contracts with a small UK firm to supply Covid antibody tests, claim lawyers who have filed a case against the health secretary.

The Good Law Project said there were a number of other companies in a better position to supply antibody tests in June and August, when the Department of Health and Social Care (DHSC) agreed deals worth up to £80m with Abingdon Health without going out to tender.

The government had also agreed a deal to share in the profits the company made, the lawyers say.

The government was determined to get a British test, following the fiasco of the purchase by the health secretary, Matt Hancock, of 3.5m Chinese antibody tests in March with orders for a further 17.5m.

Public Health England concluded in April that the Chinese tests were not good enough. Abingdon Health was then invited to develop a test, as part of a UK consortium of small companies and Oxford University.

The original intention was to allow people to find out whether they had antibodies to coronavirus in their blood, which might make them immune to the virus, say the lawyers. They could then “be released from legal restrictions generally applicable to the population as a result of the Covid-19 pandemic (a policy that has been referred to as ‘immunity passports’)”, says the claim.

Part of the government’s testing strategy published in spring was: “Mass antibody testing to help determine if people have immunity to coronavirus.”

The tests were not accurate or reliable enough for that, say the lawyers. Abingdon Health claimed in the summer that its finger-prick antibody test was 99% accurate. But last month, a Public Health England (PHE) evaluation of the tests was published in a peer-reviewed medical journal showing real-world accuracy of less than 85%.

By that time, the DHSC had switched its official line on antibody tests, the lawyers say. When the October contract to buy 1m tests was announced, the department stated: “The British-made antibody testing kits will support nationwide surveillance studies to track the spread of Covid-19 in the population.”

Commenting on the publication of the PHE evaluation in November, the DHSC said: “They were never intended for, and have never been issued for, widespread public use.”

Stian Westlake, the chief executive of the Royal Statistical Society, said the test would have limited use even for surveillance purposes. “The government proposes using the test for surveillance, which requires knowledge of how well the test does identify individuals with previous infection,” he said.

“PHE … evaluated the test for this purpose, and has shown that it missed more cases and gave more false positive results than the company states. This means it is likely to be less effective for the surveillance purposes that have been proposed.”

The Good Law Project alleges the decisions to award the contracts to the British company were illegally influenced by nationalism. The government also stood to profit from the deal, thanks to a financial arrangement giving it a share in the profits of the antibody test if it was sold commercially, according to the claim.

The government cited the pandemic as the reason why it needed to issue a contract for an antibody test without tender.

“There’s a perfectly sensible debate to be had about whether or not government should be trying to pick winners – whether government should be wanting to buy British. There are plainly pros and cons. But we should be having that debate in public,” said Jolyon Maugham, the founder of the Good Law Project.

He says the government has changed its tune as to the reasons why it is buying the antibody test.

The government has refused to give an undertaking not to award any further public contracts to Abingdon Health pending the outcome of the case and will not explain its reasons, say the lawyers.

The DHSC said it could not comment on ongoing legal proceedings.