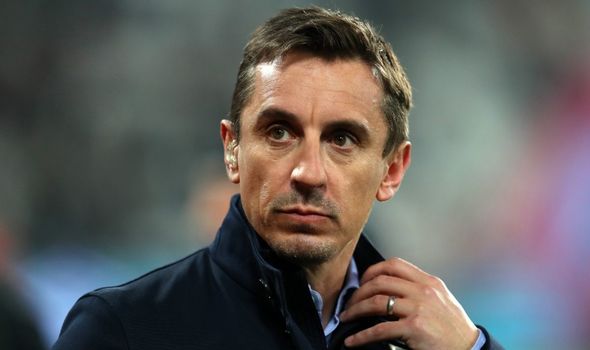 The former Manchester United and England footballer lashed out during a pre-recorded interview with Anushka Asthana on Peston, which airs on ITV at 10.45pm on Wednesday evening. Last week, Manchester was placed into Tier 3 – the highest alert level in the Government’s updated and stricter set of lockdown restriction rules. This immediately sparked a backlash from Manchester Mayor Andy Burnham, who had been at loggerheads with the Government during the previous tier system when Manchester was being moved from Tier 2 to Tier 3.

Sky Sports football pundit Neville first vented his fury at the UK Government over the way they have handled the coronavirus pandemic so far this year.

But he quickly directs his rage at Labour, launching a furious attack on the party’s decision to abstain from last night’s vote.

Neville says: “We’re frustrated from the inconsistency, the flip-flop strategies that the government have adopted over the last eight months.

“I think we’re even frustrated about the fact that yesterday the Labour Party abstained.

“You know, your job’s to stand as a leader in the most difficult times – it’s not to abstain, it’s not to not turn up.”

Neville was also asked if he felt the Government had placed Manchester into too high a tier within the new lockdown restrictions system.

He said: “I don’t think it’s necessarily the major complaint of myself or the other members of the community in Manchester about what tier we’re in.

“I think it’s the fact that there doesn’t seem to be a sustainable plan to come out of this pandemic, that we feel that we’ve obviously been in restrictions for quite a long time within Greater Manchester.

“The economic support packages don’t differ than any of the cities that are not suffering those restrictions so there’s an element of feeling that not just ourselves but other Tier 3 areas are being treated unfairly.

“It’s not a North-South thing, it’s not a Manchester v London thing.

On Tuesday evening, MPs backed the new system of coronavirus tiers in England, with the Prime Mini9ster surviving the threat of a major revolt from Tory rebels to pass the restrictions.

The House of Commons voted by votes to 78 – a Government majority of 213 – for the new restrictions, which paved the way for 99 percent of the country to enter the toughest Tier 2 and 3 restrictions when the four-week national lockdown ended on Wednesday.

But Labour leader Sir Keir ordered his MPs to abstain from the vote.

However, 15 Labour MPs ignored orders from the party to abstain in order to vote against the new regulations.

During his interview, Neville was also asked if he would be interested in running for Mayor of Greater Manchester – a role that has been held by Andy Burnham since 2017.

But the football pundit replied: “I’m not going to be running for Manchester Mayor. Andy’s doing a very good job in representing Greater Manchester.

I do feel more political over the last two or three years, I think everybody does, because the fact of the matter is that politics has become something that’s been thrust in our face, with Brexit, now with this pandemic.

“I think the fact that you’ve got divisive leaders like Donald Trump and Boris Johnson, that essentially I think it means that people feel more political.

“It’s quite simple as far as I’m concerned – just a more fair approach for everybody, look after everybody, make it about people not politics, and we’ll all be okay.

“And to me at this moment in time, everything is too political, even though I feel more political, but it’s not enough about people, it’s more about the politics.”

'We want to get back to normal!' Boris hits back after JVT's warning to keep wearing masks

Hunger continues to rise in the Near East and North Africa