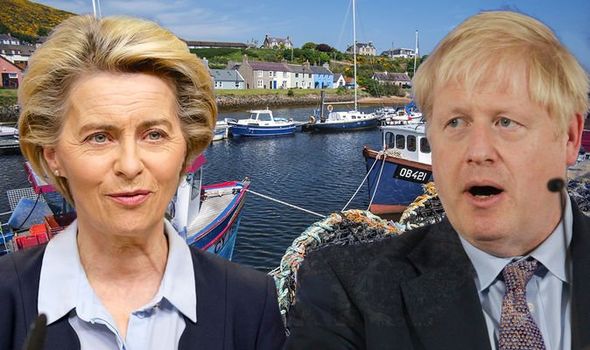 Trade talks between the UK and EU are due to resume later on Monday in a final bid to agree a post-Brexit deal. After a weekend of tense negotiations, EU sources suggested an agreement on fishing was close. However, this was later disputed by Downing Street.

It comes as the EU’s chief Brexit negotiator Michel Barnier announced last week that Prime Minister Boris Johnson had lowered his demands on Brussels by asking for up to 60 percent of catches in UK waters back from EU fishing fleets.

As he briefed ambassadors and members of the European Parliament, Mr Barnier said Downing Street had revised its demand down from 80 percent.

It is not clear whether these numbers have once again been revised.

As Brexiteers fear the result of the 2016 referendum could be betrayed with a less than substantial deal, a warning by one of the fishing industry’s leading legal experts has resurfaced.

Andrew Oliver argued it is unlikely the industry will be free of European control before 2040 and that it “might never happen”.

He said that in the long-term it might be possible to wrestle back some of the quota and fishing rights taken by European fleets, notably the Dutch and the Spanish, but that it would probably cost billions of pounds in compensation.

The trusted specialist in the field of marine law and commercial fisheries said two years ago: “I think it will take up to 20 years before we are completely divorced and have our own stand-alone statute book.

“What we may end up with may not look much different to what we started with. That’s not what the fishermen had in mind. I think they were ill-informed.

“At the same time as fishing regulations, the Government is negotiating eggs and cars and trees and every other manufacturing product – and finance and trade.

“Our civil service simply hasn’t got the capacity or the experience to legislate.”

Referring to the 2016 EU referendum, and the so-called Battle of the Thames when Brexit Party leader Nigel Farage and fishermen confronted Bob Geldof and Remain campaigners, he added in his interview with The i: “In many respects the fishing industry – I wouldn’t say hijacked – but it was misled and misdirected in what it believed would come from Brexit.”

Many fishermen believe they were betrayed by the Government when fishing rights were negotiated as Britain joined the European Economic Community (EEC), the precursor to the EU.

Speaking exclusively to Express.co.uk, former Conservative MEP Daniel Hannan argued that British fishermen should not worry, though, as Mr Johnson will undoubtedly give them back control of their waters and reverse former Prime Minister Edward Heath’s betrayal over the EEC.

The former Tory leader is known for being the man who took Britain into the European club in the Seventies.

According to Mr Hannan, Mr Heath was so “desperate” to join that he “even effectively handed away our fishing grounds as a kind of late entry fee”.

This, however, is about to change.

The prominent eurosceptic and Vote Leave founder told Express.co.uk: “I don’t think there is any chance that we will now not insist on the sovereignty of our territorial waters.

“That is not to say that we are going to have exclusive use of them.

“We don’t have the capacity for that and we never had that.

“Before we joined the EEC we always had bilateral and multilateral agreements with our neighbours like every other country in the world does.

“If fish spawn in the waters of one country, and reach maturity in another, of course those two countries will get together and agree to a quota system that they can both share and benefit from.

“We will do that just like Norway or Iceland.”

Mr Hannan argued it will be “on the basis that we are a sovereign country, making agreements with our neighbours rather than on the basis that North Sea fish stocks are a common resource to which all members have equal access”.

He added: “Boris Johnson has been very clear about that.

“We will take back sovereignty out to 200 miles all the medium line, as allowed under maritime law.

“We will look for friendly and mutually profitable deals with our neighbours in the Netherlands, France and so on that will serve our interests as well as theirs.

“But we will do so as a sovereign country.”

The two sides have less than a month to strike a deal before the end of the transition period.

European Parliament condemns UAE over death of a female prisoner