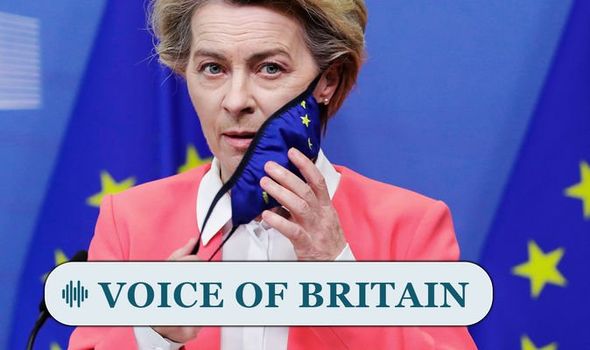 BREXIT will trigger an exodus of nations from the European Union, according to a poll after Lord Frost made one last stab at calling for re-negotiations with the bloc over the Northern Ireland Protocol.

Only nine percent of people thought the EU will retain its 27 nations for the next decade, and six percent of voters did not know whether the EU would crumble or not.

One reader, Jonha, commented: “All 27 EU countries need to break free of those shackles and stick two fingers up to the EU dictators.

“But it will be very hard for any country to leave now. Most, if not all, governments love the EU (as did ours) and so they will do all they can to deny the plebs a vote.”

When asked whether the EU will achieve its dream of a United States of Europe, the overwhelming majority of voters (92 percent) said it will not because countries will always put national sovereignty first.

A small portion of voters (six percent) thought that a United States of Europe is still on the horizon as it has always been part of the EU ‘gameplan’, whilst two percent of participants did not know what to think.

Express.co.uk reader Grockle said: “Failure of the EU will be due to its arrogant pursuit of federalisation at the expense of the sovereignty of individual nations.

“This has already triggered Brexit, and more will follow in time.

“There is too much cultural and political diversity in Europe for a one-size-fits-all federal government of Europe to ever be possible.”

A massive total of 7,117 readers (95 percent) said Britain could never expect to be treated fairly by Brussels because EU bosses will use the UK as an example to deter other nations from leaving.

Compared to just four percent of people who thought that the UK and the EU will find a way to co-exist and treat one another fairly, whilst one percent were not sure what the future relationship will hold.

Amunra commented: “No they will never treat us fair as a sovereign nation, they will continue to be bitter and stew in their own bile forevermore.”

These results contrast with data collected less than a year before in which 47 percent of British voters said that with hindsight, they thought the UK was wrong to leave the EU, whilst 41 percent thought the nation was right to do so, and 13 percent of people were not sure either way.

This change in public attitude may be connected with the recent struggles the British government has undertaken to re-negotiate an ‘acceptable’ agreement for the Irish border protocol. The EU will not budge on the original policy agreed by Prime Minister Boris Johnson to ‘get Brexit done’, which has left many Northern Irish peoples’ lives and livelihoods devastated.

Readers were divided about which nation is the most likely to be the next to leave the EU.

The largest share of the vote went to the Netherlands with 31 percent of voters predicting their EU departure.