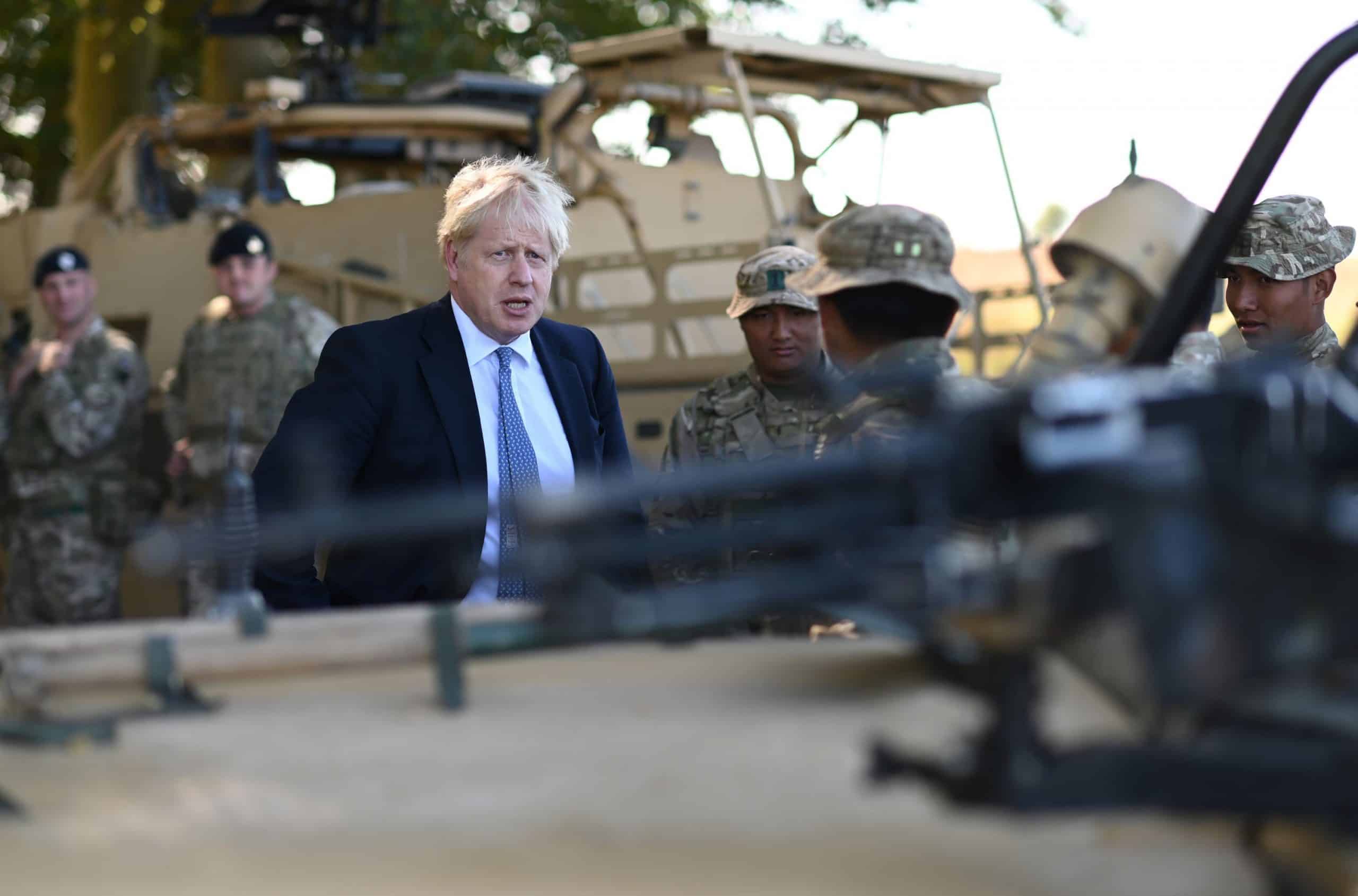 Boris Johnson’s plan to increase the size of the UK’s nuclear weapons stockpile amounts to a violation of international law, campaigners and experts have warned.

The government’s integrated defence review said the UK would be lifting the cap on its nuclear arsenal by 40 per cent, to 260 warheads.

The UK had previously been committed to cutting its stockpile to 180 warheads by the mid-2020s, but the review said this policy would be changed “in recognition of the evolving security environment, including the developing range of technological and doctrinal threats”.

The announcement comes despite the UK being a signatory of the Treaty on the Non-Proliferation of Nuclear Weapons, which commits the government to gradual nuclear disarmament under international law – a policy successive administrations have stuck to.

The review also says the UK reserves the right to withdraw assurances that it will not use nuclear weapons against a non-nuclear armed state “if the future threat of weapons of mass destruction, such as chemical and biological capabilities, or emerging technologies that could have a comparable impact, makes it necessary”.

The NPT rests on the promise of nuclear-armed states that they will never use nuclear weapons on a non-nuclear armed state, as an incentive for the latter not to seek to acquire its own arsenal.

Labour criticised the plans to increase the size of the stockpile, though the party supports the renewal of Trident in general.

“I voted for the renewal of Trident and the Labour Party’s support for nuclear deterrence is non-negotiable – but this review breaks the goal of successive prime ministers and cross-party efforts to reduce our nuclear stockpile,” Sir Keir Starmer said in the Commons. “It doesn’t explain when, why, or for what strategic purpose.”

The Labour leader added: “From Europe to the Indian Ocean, this government now has a reputation for breaking international law, not defending it.”

“This will put Britain in violation of its non-proliferation treaty Article 6 obligations,” he said.

He pointed out that UK government ministers had as recently as 2015 publicly acknowledged that cuts in nuclear arsenal size were part of the UK’s obligations under the treaty.

In a speech to the United Nations on 27 April of that year, Foreign Office minister Baroness Anelay had said the UK “remains firmly committed to step-by-step disarmament, and our obligations under Article 6”.

She suggested action to meet these obligations included cutting “our total number of operationally available warheads to no more than 120” and reducing “our overall nuclear warhead stockpile to not more than 180 by the mid-2020s”.

Reacting to the new policy, Beatrice Fihn, executive director of the International Campaign to Abolish Nuclear Weapons (ICAN), said: “A decision by the United Kingdom to increase its stockpile of weapons of mass destruction in the middle of a pandemic is irresponsible, dangerous and violates international law.

“While the British people are struggling to cope with the pandemic, an economic crisis, violence against women, and racism, the government choses to increase insecurity and threats in the world. This is toxic masculinity on display.

“While the majority of the world’s nations are leading the way to a safer future without nuclear weapons by joining the Treaty on the Prohibition of Nuclear Weapons, the United Kingdom is pushing for a dangerous new nuclear arms race.”

In a further statement, the organisation suggested the UK would face censure at the next NPT review conference, which is due to take place in August at the United Nations.

“The United Kingdom is legally obligated under the nuclear non-proliferation treaty to pursue disarmament. States will meet soon to review the NPT’s success and when they do, the UK will have to answer for its actions,” the statement said.

ICAN won the Nobel Peace Prize in 2017 for its “ground-breaking efforts to achieve a treaty-based prohibition” of nuclear weapons.

Article 6 of the NPT, to which Britain is a signatory, commits countries to “pursue negotiations in good faith on effective measures relating to cessation of the nuclear arms race at an early date and to nuclear disarmament”.

Kate Hudson, general secretary of the UK’s Campaign for Nuclear Disarmament, said: “A decision to increase Britain’s nuclear arsenal absolutely goes against our legal obligations under the nuclear non-proliferation treaty.

“Not only is the UK failing to take the required steps towards disarmament, it is willfully and actively embarking on a new nuclear arms race – at a time when presidents Biden and Putin have renewed their bilateral nuclear reductions treaty.

“Britain must not be responsible for pushing the world towards nuclear war. This is a dangerous and irresponsible move, and must be reversed.”

Speaking ahead of the review’s release, Dominic Raab described increasing the stockpile as the “ultimate insurance policy” against threats from hostile states.

Asked why the government wanted to end three decades of gradual disarmament, Mr Raab told BBC Radio 4’s Today programme: “Because over time, as the circumstances change and the threats change, we need to maintain a minimum credible level of deterrent.

“Why? Because it is the ultimate guarantee, the ultimate insurance policy against the worst threat from hostile states.”

But the plans were criticised by the Scottish National Party, which governs Scotland, where the nuclear arsenal is actually based.

Stewart McDonald, the party’s defence spokesperson, said: “Renewing Trident nuclear weapons was already a shameful and regressive decision, however, increasing the cap on the number of Trident weapons the UK can stockpile by more than 40 per cent is nothing short of abhorrent.

“It speaks volumes of the Tory government’s spending priorities that it is intent on increasing its collection of weapons of mass destruction – which will sit and gather dust unless the UK has plans to indiscriminately wipe out entire populations – rather than address the serious challenges and inequalities in our society that have been further exposed by the pandemic.”

Asked why the UK was lifting the cap on its nuclear stockpile, Boris Johnson’s official spokesperson said: “In recent years, we have seen nuclear armed states ignore international norms. It remains the case that we believe the best way to protect ourselves and our Nato allies is to make sure we have a credible nuclear deterrent.

“The 260 figure is a ceiling, not a target. We will continue to keep this under review in the light of the international security climate and make adjustments as appropriate.”

The spokesperson said that the expected cost of additional nuclear capabilities would be made public “in due course”, but said the government was committed to maintaining a “minimum credible independent deterrent”.

He added: “The nuclear non-proliferation treaty doesn’t require us to reduce the number of warheads.

“What you have seen in the integrated review is consistent with our non-proliferation treaty obligations.”

Just nine countries in the world still have nuclear weapons, putting the UK out of step with most of its European neighbours.

France is the only country in the European Union with nuclear weapons. The other recognised nuclear states under the NPT are the United States, Russia, and China.

India, Pakistan, and North Korea also have weapons, and Israel is generally understood to have weapons but does not publicly acknowledge their existence.

The claim that the UK is violating international law on its nuclear disarmament obligations comes after ministers admitted to breaking it over Brexit. The government suggested this breach was acceptable because the law had only been broken in a “limited and specific” way.