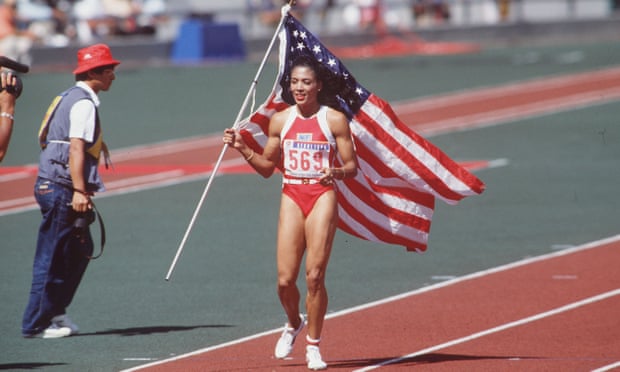 The news that Tiffany Haddish will produce and star in a film about Florence Griffith Joyner has renewed attention on the Olympic champion’s brilliant if controversial career – and shone new light on her trailblazing fashion.

In the late 1980s, when the sprinter shot to fame, no one looked like her. “Flo-Jo” competed in outfits that were part-rock star, part-cartoon crusader, a unique look to which Beyoncé and Serena Williams have recently paid tribute.

Announcing her project, Haddish said she was “looking forward to telling Flo-Jo’s story the way it should be told. My goal with this film is making sure that younger generations know my ‘she-ro’ Flo-Jo, the fastest woman in the world to this day, existed.”

Griffith Joyner was the first American woman to win four medals in track and field at a single Olympic Games, in Seoul in 1988. However, since her death 10 years later, aged 38, her sporting legacy has been muddied by allegations of doping – despite the fact she never tested positive and was subjected, according to the chair of the International Olympic Committee’s medical commission, to “all possible and imaginable analyses”.

Away from the track, Griffith Joyner’s style made her a pop culture phenomenon. Running in one-legged spandex bodysuits, shiny leggings, full hair weaves and s 6.5in painted nails, she brought MTV zest to the track.

“No male athlete [has] brought glamour and individuality to his sport as well as being at the top of his sport,” Donna Lopiano, president of the Women’s Sports Foundation, said at the time. “She is a combination of Dennis Rodman and Michael Jordan.”

Like those NBA stars, Griffith Joyner blurred lines between sportswear and the catwalk. She could knit, crochet and manicure, skills which helped create her looks.

“She was designing uniforms in high school and clearly understood how one presented themselves to the world determined how they were received by audiences,” says Darnell-Jamal Lisby, a fashion historian.

“She was keen on connecting her passion for the sport through her style, while also understanding that she was one of the only black women on that level who also served as a role model for future generations.”

That came to pass. In February, Serena Williams paid tribute at the Australian Open with a hot pink, orange and black one-legged bodysuit. In 2018, Beyoncé dressed as Flo-Jo for Halloween, in a version of her violet unitard.

The “one legger”, as Flo-Jo called it, was created accidentally.

“It was a two-legged outfit and I was going to make another style [but] I was cutting one leg off and I liked that look,” she told Jet magazine.

“Some people think that one-legged outfits are more bare than having both legs out …I think it was shocking. People say it’s too much for sports. They figure people can’t run fast wearing that.”

Her style remains influential. In the case of Beyoncé, Lisby said, “the idea of presenting oneself in this ‘superhero-like’ depiction is very integral to her artistry, as it was Joyner’s. Showing black women in such powerful perspectives was and still is key in motivating members of the black community and women across the world.”

Whether You Like Piña Coladas or Not, You’re Going to Love Gigi Hadid’s Kitschy Sweatshirt