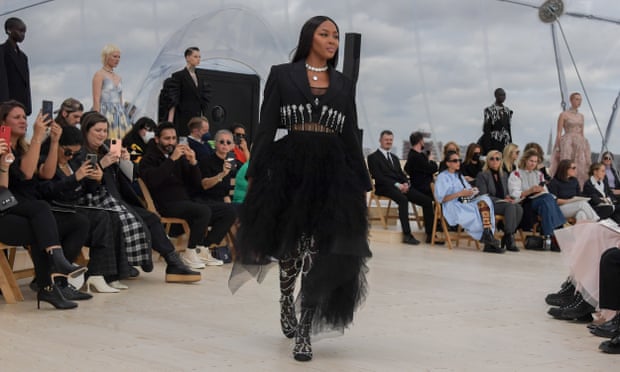 Twenty years after a young Lee McQueen signed a deal with Gucci and moved his catwalk shows from East End carparks in London to plush Parisian salons, the Alexander McQueen brand marked the world’s shifting back on to its axis by coming home.

The first McQueen show in 18 months brought actors Vanessa Kirby, Emilia Clarke and Kosar Ali to a front row of folding chairs on the 11th floor of a Wapping multistorey where the Shard, Gherkin and Walkie-Talkie buildings gave an alfresco catwalk a recognisable London backdrop.

“I wanted to be high up on a rooftop, as a moment of release after what we’ve all been through,” said the designer Sarah Burton after the show. “But at the same time, it doesn’t feel like this is necessarily the end of anything. Maybe it’s just a moment of sunshine, who knows.”

The sun did shine – but Naomi Campbell closed the show in a storm of shredded black tulle flecked with crystal raindrops. “Stormy skies are what we’ve been living through, so it’s about darkness and light,” said Burton. “And also, this is a show celebrating London as our home – my home, my team’s home, and the brand’s home – and unpredictable skies are a part of London life.”

Shards of silver sequins rattled like hailstones from floor-length hems as models stomped the catwalk in chunky-soled boots. There were sheer corset dresses with their bones flaring around the body like umbrella ribs.

This being an Alexander McQueen show, there was close-cropped hair, and tattoos; multiple piercings; and bleached eyebrows. But there were also red-carpet gowns in sunshine yellow and sundresses in blue-sky denim.

The celebrity-packed front row served as a reminder that Burton’s McQueen is about flashbulbs and glamour, as well as melancholy. “The sky can be serene or it can be turbulent. It can be kind or it can feel frightening. It reminds us that we are part of a world that is out of our control,” said Burton.

Asked why the show was staged three weeks after London fashion week, and a week after the end of fashion month, Burton shrugged. “Things have changed, and I think they have changed for ever. A year and a half of working at home means that the rhythm of how we live and work has changed and we should respect that. I don’t feel like everything has to go back to the old formulas.”

The pandemic has been brutal for British fashion but Burton, who steered the label through the shock of its founder Lee McQueen’s sudden death in 2010 and brought it out of the darkness by pulling off a fairytale secret Royal Wedding dress for Kate Middleton a year later, has form in surviving trauma. Alexander McQueen has matured from being the workshop of a singular genius into a global luxury brand.

In the past four years, the number of McQueen stores worldwide has doubled to 100, with sites opening from Miami to Tokyo – even in the tough times of 2020. Its parent group, Kering, singled out McQueen, along with Balenciaga, in a first-quarter earnings report for this year, describing its performance as “outstanding”.

A pair of Yeezy Boost 350 V2 Beluga 2.0s has popped up on Stadium Goods

What does the Met Gala 2019 theme mean and what was the inspiration?