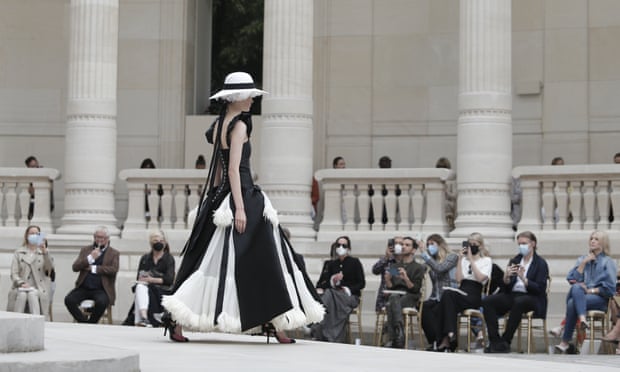 “Today, we begin again,” says Bruno Pavlovsky, Chanel’s president of fashion, as the Palais Galliera museum in Paris is being prepared to host 240 guests split between two sittings at the label’s first major live catwalk shows since the beginning of the pandemic.

Every fashion week kicks off a new season, but it is hoped the haute couture shows being staged in Paris signify a more significant shift: the return of normality.

At haute couture fashion week, normality means pomp and ceremony. The British actor Daisy Edgar-Jones was in the front row as the Chanel designer Virginie Viard’s latest collection was paraded through the open air central courtyard of the museum.

“It is good to be able to have an audience, but not too big – we need to keep it exclusive, to keep it safe. We chose this venue because it has some shelter but also ventilation. It is reassuring for everyone to be outside, at the moment, and we want our guests to be comfortable,” said Pavlovsky.

Viard took the quintessentially French charm of impressionism as a starting point for a sweetly nostalgic collection. A demure white gown with swags of silk punctuated at the hip with lavish black ribbon bows looked like a Berthe Morisot portrait had come to life. There were dresses embellished with waterlilies and a vast feathered hat, as well as the inevitable glitter tweed jackets.

The actor Margaret Qualley closed the show in a flawless ivory bridal gown, smiling broadly at the audience from beneath a veil flecked with pointillist embroidery, and tossed her bouquet into the audience as she left the catwalk.

Fashion, like the rest of life, is entering a hybrid period in which a slow return to physical meetings will coexist with digital events. A few hours after the catwalk show, Chanel released an extended collection video by Sofia Coppola, which included extra footage filmed on the rooftop of the museum, with models striding across its distinctively Parisian zinc tiles. A digital alternative that is more than simply a recorded version of a live event becomes of diplomatic importance during a period when travel privileges are unevenly distributed around an international audience.

“The first part of 2020 was very difficult. We suffered,” said Pavlovsky. “But we have reorganised ourselves, launched a new app, focussed on local teams around the world and step by step we have recovered the business. In one year, Chanel changed more than it had done in the 10 years before that.”

The swift return of live shows has underscored their importance in the fashion industry, but prospects for the next catwalk season in the autumn remain uncertain. “As of today in France, the situation is much better than it has been. But we have learnt that it is impossible to predict what happens in two months time, let alone in October,” said Pavlovsky.

Can AI create a masterpiece?