Navalny, a fierce critic of President Vladimir Putin, organized the rallies in several cities across Russia on Saturday. He was detained by police shortly after arriving in Moscow's Pushkinskaya Square, with dramatic images showing the protest leader being carried through the crowds by police.Navalny said in a tweet that he was released shortly after midnight on Sunday, after police "registered two protocols against me: organization of a rally and resistance of the police."His release comes ahead of Putin's inauguration as president Monday after winning re-election in March. It will be Putin's fourth term as president, delivering him six more years as leader, and ultimately seeing him in power for 24 years. It also makes him Russia's longest-serving leader after Soviet dictator Joseph Stalin's 29-year rule. 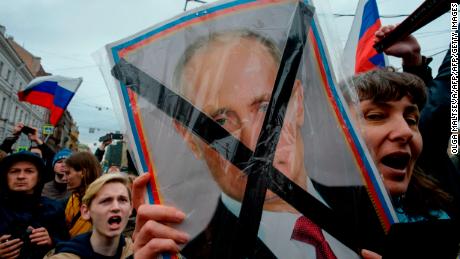 Navalny is Russia's best-known opposition leader, and was barred from running in the presidential elections after a 2017 criminal conviction for embezzlement.Critics say the case against the 41-year-old was politically motivated to keep him off the ballot.Police detained about 300 people at the "unauthorized rally," according to Russian state-run news agency TASS. 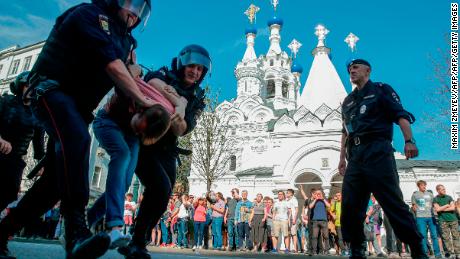 Protesters chanted "shame," "Putin is a thief" and "we're fed up" as they marched through Moscow, some carrying placards or Russian flags. A number of pro-Putin supporters also turned up at the protest, their chants drowning out those for Navalny.Navalny was detained for "staging an unsanctioned public event," TASS reported. Russian authorities demand that applications be filed and the timing and location approved for any rallies, protests or public events.In this case, city officials had not authorized the protest in Pushkinskaya Square. The Navalny campaign had been offered another location away from the city center, but went ahead at the unauthorized venue.It's not the first time Navalny has been detained for staging an unauthorized event. In January, he was held after leading anti-Kremlin rallies across the country that called for voters to boycott the upcoming presidential election.With Putin controlling Russian State TV, Navalny and his supporters have increasingly turned to YouTube to get their message out. Navalny is known for posting online articles about the alleged corrupt practices of Russia's elite.The Kremlin has rejected allegations of widespread high-level corruption and condemned Navalny as a dangerous threat to the country's stability.

CNN's Mohammed Tawfeeq in Atlanta and Emma Burrows in Moscow contributed to this report.