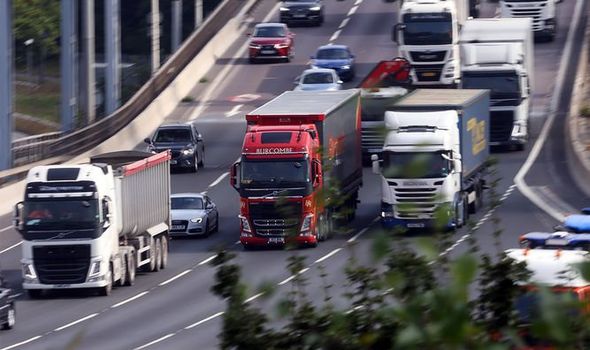 Shortage issues don’t only come down to Brexit, a European expert acknowledged. Relying on foreign staff can be problematic for any country, including Germany, where closed borders during the coronavirus pandemic led to “empty supermarket shelves”.

Throughout COVID-19, conditions at the Bavarian border region between Hof and Passau have been close to those we are currently seeing at home.

Manuel Lorenz, a logistics expert at the Regensburg Chamber of Commerce, blames the hiring of too many workers from abroad.

With local haulage companies recruiting up to 60 percent of their staff from the Czech Republic, they were left stranded when the Czech government closed the border at the peak of the Covid crisis.

Speaking to BR24, a German radio station, Mr Lorenz said: “I have already thought of panic-buying, to be frank.”

A survey of 500 regional logistics companies carried out by the Chambers of Commerce and Industry in Bavaria in 2019 showed that practically all companies are desperate to find new lorry drivers.

According to BGL, the leading association of German transport logisticians, around 30,000 German drivers retire per year while only some 17,000 new ones train to join the profession.

The result – a lack of thousands of workers.

Unions and chambers largely agree about the cause of the shortage. Germany needs to hire staff from neighbouring countries such as the Czech Republic because Germans are reluctant to enter a sector where wages are below average; with irregular working hours, and with tough working conditions.

As the UK struggles with a significant lack of HGV drivers, which has led to shortages in supermarkets and fears of fuel running out at petrol stations, Brexit critics have sought to blame the departure from the EU as the main reason behind the supply chain crisis.

But a report from the Road Haulage Association claims that Brexit isn’t solely responsible for the trucker shortage. Changes to tax rules for the self-employed (IR35) and the mass cancellation of driving tests because of Covid also had a crucial impact on the lorry driver situation.

Treasury Minister Simon Clark, speaking to Justin Webb on the Today programme, said the UK isn’t alone in this: “We have a problem which we need to fix but one which is shared by other European countries, too.

“The idea this is about Brexit is to try and take us back into what is really a negative conversation around opportunities foregone.

“If you look at the situation in Germany, in Poland, in France, they share these problems too.

“The idea that this is somehow just a British problem is fundamentally wrong.”

Transport Secretary Grant Shapps told Sky News: “I have seen people point to Brexit as the culprit here when in fact they are wrong.

“Not only are there very large and even larger shortages in other EU countries like Poland and Germany, which clearly can’t be because of Brexit but actually, because of Brexit I have been able to change the law and alter the way our driving tests operate in a way that I could not have done if we were still part of the EU.”

The Kyiv moment will bring a stronger and united Europe

Work begins to clean up areas of Salisbury after Skripal poisoning

Tens of thousands protest in Belarus despite police detentions