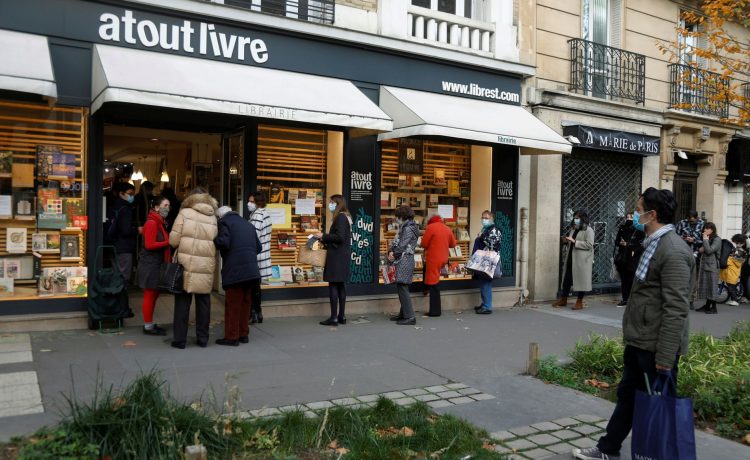 France is preparing to ease its Covid-19 lockdown rules in the weeks leading up to Christmas with new daily caseloads falling and pressure building from retailers to allow the annual shopping season to go ahead.

But parts of east Asia that were thought to be controlling the disease have raised the possibility of new restrictions.

The moves came as the World Health Organization warned that Europe would be hit by a third wave of the pandemic in early 2021 if governments still failed to build the necessary systems to curb new infections.

He singled out Switzerland’s move to allow skiing while other Alpine nations have closed resorts, warning that the country could reach a “very high level of sicknesses and deaths”.

Praising the response of Asian countries, he told Solothurner Zeitung: “People are fully engaged, they take on behaviours that make it difficult for the virus. They keep their distance, wear masks, isolate when they’re sick, wash hands and surfaces. They protect the most endangered groups.”

In contrast, “Europe’s reaction was incomplete”, he said. “You must wait until case numbers are low and stay low,” he said regarding lifting restrictions.

The French president, Emmanuel Macron, will on Tuesday address the country and is expected to announce a three-stage pathway out of a stringent lockdown that has been in place since 30 October.

“There will be three steps to easing in view of the health situation and of risks tied to some businesses: a first step around 1 December, then before the year-end holidays, and then from January 2021,” the government spokesman Gabriel Attal told Le Journal du Dimanche.

He flagged that retailers would be permitted to reopen in time for Christmas, when many make the bulk of their annual turnover. “We had committed to allow them to reopen around 1 December if the health situation improved, which seems to be the case,” Attal said.

Bars and restaurants, however, “will continue to experience restrictions”, he added.

The number of new coronavirus infections in France rose by 17,881 on Saturday, lower than the 22,882 reported on Friday, while the number of people in hospital with Covid-19 dropped for the fifth day in a row to 31,365.

South Korea, which has employed an aggressive tracing, testing and quarantine effort to stamp down on outbreaks without imposing lockdowns, warned that social distancing rules may need to be tightened in the light of a small but persistent increase in new cases over the past week.

The Korea Disease Control and Prevention Agency reported 330 new daily coronavirus cases as of midnight on Saturday, a drop from 386 reported the day before, a level not reached since August.

Bars, nightclubs, religious services and sports events continue to be permitted with attendance restrictions, but that could change if officials impose stricter social distancing measures.

Japan may also reimpose attendance limits for sports and other large events to curb a rise in Covid-19 infections, the economy minister, Yasutoshi Nishimura, said on Sunday.

The limits would be applied in areas of the country reporting a sharp increase in cases, Nishimura said on a talkshow on the public broadcaster NHK. The government imposed attendance limits earlier in the year but relaxed them in recent months.

The government is also considering how to refund cancellation fees for customers who booked trips via a domestic tourism campaign that was partly suspended on Saturday, Nishimura said.

New coronavirus cases across Japan climbed to a record 2,596 on Saturday, according to NHK. In Tokyo, the daily infection rate was an all-time high of 539 cases.

Iran has recorded 13,053 new cases of coronavirus and 475 related deaths over the past 24 hours to Sunday, after tougher coronavirus restrictions came into force in the country.

The health ministry figures take the total death toll to 44,802 and the tally of cases to 854,361 in the Middle East’s worst-hit state.

Some Iranian authorities have warned that the number of daily coronavirus deaths could reach 1,200 if the country failed to respect health protocols, including mask-wearing and social distancing.

A sharp rise in coronavirus infections in the Gaza Strip could overwhelm the Palestinian enclave’s meagre medical system by next week, public health advisers said on Sunday.

Gaza, where the dense and poor population of 2 million is vulnerable to contagions, has logged 14,000 coronavirus cases and 65 deaths, mostly since August.

Seventy-nine of Gaza’s 100 ventilators have been taken up by Covid-19 patients, said Abdelraouf Elmanama, a microbiologist who is part of the enclave’s pandemic taskforce.

“In 10 days the health system will become unable to absorb such a hike in cases and there might be cases that will not find a place at intensive care units,” he said, adding that the current 0.05% mortality rate among Covid-19 patients could rise.

Gaza’s Islamist Hamas government has so far imposed one lockdown. A longstanding Israeli blockade, which is supported by neighbouring Egypt, has crippled Gaza’s economy and undermined its public health apparatus. Israel claims it is trying to keep weapons from reaching Hamas.