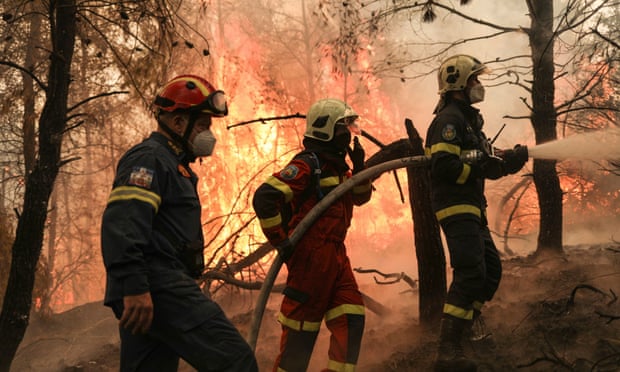 In scenes more resonant of war, trained firefighters backed by a ragtag army of local people waged a “superhuman” battle overnight to extinguish wind-whipped blazes raging for an eighth day on the Greek island of Evia.

With yet another village ordered to be evacuated on Tuesday, a multinational force of nearly 900 firefighters were at the scene in a desperate bid to stop the conflagration enveloping the northern town of Istiaia.

The fire service said that in addition to 873 firefighters, 50 ground teams and 229 vehicles were fighting the blaze.

In tinderbox conditions created by unprecedented summer temperatures, Greece has been in the eye of a storm of forest fires also witnessed in Italy and Turkey.

In a televised address late on Monday, the prime minister, Kyriakos Mitsotakis, said it was clear the country was enduring “a natural disaster of unprecedented dimensions”. He said firefighters had been forced to deal with 586 blazes triggered and exacerbated by a heatwave expected to intensify again this week. Mitsotakis has said the crisis reflects the reality of climate change.

“These last few days have been the hardest for our country in decades,” said the leader, who apologised for failings in what has been an often chaotic response to the emergency.

Infernos in Evia, Greece’s second-largest island, have been by far the worst in the country, decimating vast tracts of pristine pine forest and destroying an untold number of homes. In the municipality of Mantoudi more than 1,000 homes have been burned, with communities farther north now confronting the same prospect if the fires are not put out.

In Evia and the southern Peloponnese, where infernos have also raged, the phenomenon of fires rekindling after previously being extinguished has hampered efforts as the blazes, propelled by unpredictable winds, have leaped back into life.

“We’re talking about flames 30 metres high that suddenly appear,” a woman on Evia told the state broadcaster, ERT, as her husband bemoaned the absence of water-dropping planes and helicopters coming to the rescue.

Skies blanketed by smoke and ash hampered visibility for pilots from the 22 nations that have weighed in with help. Yesterday, Turkey and Russia said they would also send in planes to boost reinforcements already dispatched by Europe, countries in the Middle East, the United Kingdom and the United States.

In the absence of planes over Evia, bulldozers could be seen early on Tuesday creating firebreaks in forests. Since the crisis began last week with wooded suburbs on the northern fringes of Athens going up in flames, local people have been seen using anything they can – from garden hosepipes to rudimentary buckets – to protect their homes.

By Monday, about 2,600 people had been evacuated from Evia on a flotilla of boats, with elderly and infirm people being forced to seek refuge on ferries, or sleep on sun loungers on the beach.

Mindful of the devastasting fires that left 103 dead in the seaside towns of Mati and Kokkino Limanaki in July 2018, the government has prioritised saving lives. But some residents say evacuation orders have been premature and have only allowed properties and prime forests that might otherwise have been saved to go up in flames.

Poland to hold presidential election on June 28, after delay due to Covid-19