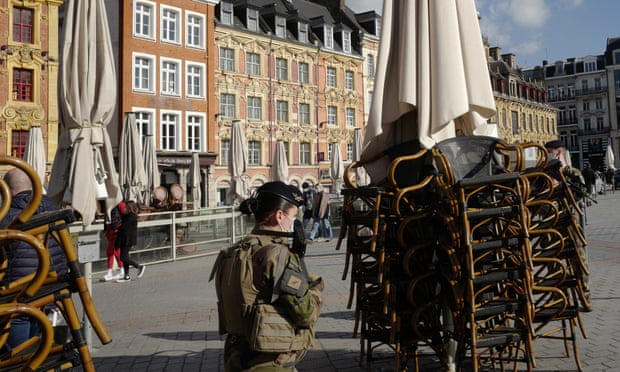 European leaders are lifting restrictions across a lockdown-weary bloc as they take what Italy’s prime minister, Mario Draghi, has admitted is a “calculated risk” that accelerating vaccination campaigns will keep stubbornly high infection rates in check.

France’s president, Emmanuel Macron, will present details of a progressive relaxation of Covid measures on Friday, the prime minister, Jean Castex, said on Wednesday, conceding that virus circulation “remains high … but is on a real downward trend”.

France’s rolling seven-day average of new infections has dipped below 28,000 for the first time in more than a month, but hospitals this week exceeded 6,000 Covid-19 intensive care patents for the first time since during the first wave in April 2020.

The French health minister, Olivier Véran, said the South African variant of the virus had risen from 6% to 10% of new cases detected in the greater Paris region, although no infections had been confirmed in mainland France with the Indian variant.

“We have to continue our efforts, particularly against the new variants,” Véran said after millions of primary pupils returned to school this week following a three-week “lockdown lite”. Secondary schools are due to reopen next Monday.

A ban on people travelling beyond a 10km radius of their homes is also set to be lifted on 3 May, with non-essential shops and bar and restaurant terraces expected to open later in the month, along with the country’s nationwide 7pm curfew.

Like other EU member states, France is counting on its vaccination campaign, which is gathering pace rapidly after a slow start, to keep case and hospitalisation numbers down. More than 27% of French adults have received a first dose.

Germany on Wednesday raised its economic growth forecast for 2021, also citing the gathering pace of vaccinations as light at the end of the tunnel after struggling for months to put in place concerted action to halt a virulent second wave.

A amended law in force from Saturday gives Chancellor Angela Merkel’s government greater powers to impose restrictions, including night curfews and school closures, following a lengthy tug of war with the leaders of Germany’s 16 states.

Under the regulation, all regions with incidence rates of more than 100 new infections per 100,000 people over the last seven days must apply shutdowns and curfews, while schools must go online if the incidence rate exceeds 165.

Hopes are growing, however, that curbs can be eased in coming weeks as the proportion of Germans with at least one injection nears 25%. Merkel underlined this week that Europe’s biggest economy is aiming to offer every adult a jab from June.

Poland’s prime minister, Mateusz Morawiecki, on Wednesday announced an easing of restrictions from next week, saying that in terms of new infections the worst of the pandemic “is probably behind us” and pointing to grounds for “cautious optimism”.

Shopping malls and museums should reopen from 4 May, when the first three school years will also return to class, with other pupils due to resume in-person classes on 29 May. Hotels will reopen on 8 May and cafe and restaurant terraces on 15 May.

Indoor service will resume from 29 May, when theatres and cinemas will also be able to reopen, Morawiecki said. About 11 million people in Poland, which has a population of 38 million, have received at least one Covid vaccine dose.

The Netherlands on Wednesday lifted a night-time curfew that has been in place for the past three months, and allowed bars and restaurants to serve on outdoor terraces – with no more than two customers per table – between noon and 6pm.

Despite infections running at their highest level since January and Dutch hospitals operating near capacity, shops can also admit more clients and people may now welcome two guests rather than one into their homes in any 24-hour period.

In Italy, bars, restaurants, cinemas and concert halls will partially reopen on Monday after months of stop-start restrictions, with three-quarters of the country’s regions dropping into the low-risk “yellow” categories.

The decision means bars and restaurants can serve customers outside – including, for the first time in six months, in the evening – although a 10pm curfew remains in place. Cinemas, theatres and concert halls will also be able to open at 50% capacity.

Swimming pools, gyms, sporting events and theme parks are expected to follow suit by 1 July in a progressive relaxation that Draghi has admitted is a gamble, with case numbers and intensive care admissions falling slowly but deaths still mounting.

Although there are major disparities between its different regions, Italy’s vaccination programme is gathering pace, with more than 17.5m jabs administered so far in a population of about 60 million.

The head of the German pharmaceuticals company BioNTech, meanwhile, said on Wednesday Europe could achieve herd immunity – estimated by experts at about 70% of the population – against Covid-19 within the next four months.

“Europe will reach herd immunity in July, latest by August,” Ugur Sahin, BioNTech’s chief executive, said. The EU is expected this week to announce a deal to buy a further 1.8bn BioNTech shots in anticipation of a possible need for booster shots.

Who is Ratko Mladic?