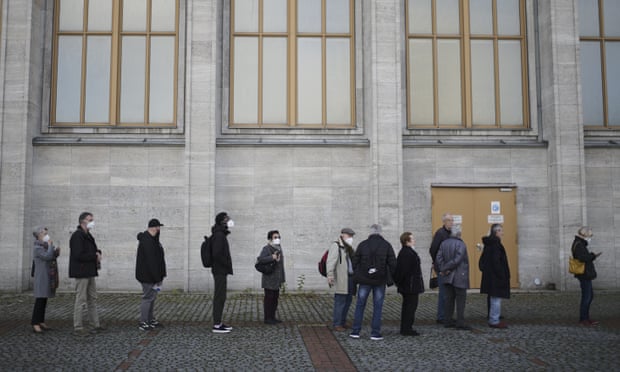 Uneven vaccine coverage and a relaxation of preventive measures have brought Europe to a “critical point” in the pandemic, the World Health Organization has said, with cases again at near-record levels and 500,000 more deaths forecast by February.

Hans Kluge, the WHO’s Europe director, said all 53 countries in the region were facing “a real threat of Covid-19 resurgence or already fighting it” and urged governments to reimpose or continue with social and public health measures.

“We are, once again, at the epicentre,” he said. “With a widespread resurgence of the virus, I am asking every health authority to carefully reconsider easing or lifting measures at this moment.” He said that even in countries with high vaccination rates, immunisation could only do so much.

“The message has always been: do it all,” Kluge said. “Vaccines are doing what was promised: preventing severe forms of the disease and especially mortality … But they are our most powerful asset only if used alongside public health and social measures.”

Vaccinations meant they had not seen “the same rates of hospitalisation or mortality we would have otherwise expected”, she said. “However, the more cases you have in crude terms, the more people will end up in hospital, and the more people will in the end go on to die. So there’s a very simple explanation for what’s going on.

“We have many susceptible individuals, including in high-vaccinated countries, and this is leading to unpredictable explosive outbreaks of Covid-19. And that’s not where we want to be right now.”

Germany reported a record-high number of Covid-19 cases on Thursday, with 33,949 infections in the past 24 hours compared to a previous high of 33,777 new cases in December 2020. The federal health minister, Jens Spahn, is to meet state health ministers to discuss how to limit the virus’s spread before the winter.

Bulgaria and Romania, the two eastern EU countries with the bloc’s lowest vaccination rates – 25.5% and 37.2% of adults respectively – this week reported their highest daily Covid-19 death tolls since the beginning of the pandemic.

Among the countries with the highest numbers of new daily infections, Latvia, Lithuania and Estonia are facing critical overloads on their health care systems and tightening measures, with Latvia imposing a nightly curfew, barring all public and most private gatherings, and limiting shopping to all but essential goods.

Estonia closed all public events and gatherings to non-vaccinated people and required those who have had both jabs to wear masks indoors, while several Russian regions said they could impose additional restrictions to fight a rise in cases that has already prompted Moscow to reimpose a partial lockdown nationwide.

Facing a dramatic increase in infections, the Dutch government will reintroduce tougher social restrictions from 6 November, making mask-wearing obligatory in public spaces such as shops and Covid passes mandatory for museums and other public spaces.

The move follows neighbouring Belgium’s decision to tighten its restrictions from Monday after case numbers hit their highest level in a year, reimposing mask-wearing indoors and encouraging people to work remotely.

Insufficient vaccination coverage and the relaxation of public health and social measures were to blame, he said. With a billion doses now administered in Europe and central Asia, vaccines were saving “thousands upon thousands” of lives.

But while 70% of people in some countries are fully vaccinated, barely 10% are in others. “Where vaccine uptake is low, in many countries in the Baltics, central and eastern Europe and the Balkans, hospital admission rates are high,” he said.

Kluge said the most alarming development was the rapid increase in infections and deaths in older population groups, with hospital admission rates more than doubling in a week and 75% of fatal cases now occurring in people aged 65 years and over.

“If we stay on this trajectory, we could see another half a million Covid-19 deaths in Europe and central Asia by the first of February next year, and 43 countries in our region will face high to extreme stress on hospital beds,” he said.

Authorities must accelerate vaccine rollouts, including booster shots for at-risk groups, he said: “Most people hospitalised and dying from Covid-19 today are not fully vaccinated.”

But public health measures such as test and trace, and social measures such as mask-wearing and distancing, were equally vital, he said, adding that WHO estimates suggested that 95% universal mask use in Europe and central Asia “could save up to 188,000 of the half a million lives we may lose” before February.

When applied “correctly and consistently”, preventive measures “allow us to go on with our lives, not the opposite”, Kluge said. “Preventive measures do not deprive people of their freedom, they ensure it.” Covid passes showing proof of vaccination should be viewed as “a collective tool towards individual liberty”.

Greece to use drones to stop crowds gathering for Orthodox Easter

Gunman shoots six dead at Czech hospital before killing himself