Announcing details of the itinerary on Friday, the UK government disclosed that Trump will attend a black-tie dinner hosted by Prime Minister Theresa May at Blenheim Palace, the birthplace of the UK's celebrated wartime leader. He will hold talks with May at her country retreat, and spend a night at the residence of the US ambassador in London. But in a break from custom for a visit by a foreign leader, he will not visit Downing Street.The US ambassador to London, Woody Johnson, rejected suggestions that the itinerary had been designed to avoid protestors. "The President is not avoiding anything," he told journalists. "The President is merely trying to get as impactful a trip as he can get in a 24 hour period."Johnson said the President would use mostly the Marine One helicopter to get around. "This is a short trip. It's absolutely packed with things that he has to do. There's a lot of organization planning that went into it."When a date for the UK trip — billed as a "working visit" rather than a state occasion — was finally confirmed last month, it ended a months-long back-and-forth over when Trump would at last pay a call on America's closest ally.According to the itinerary released by Downing Street, Trump will arrive in the UK early Thursday afternoon from a NATO summit in Brussels that could prove acrimonious, if last month's G7 summit is anything to go by. Later that evening, he will attend the Blenheim Palace dinner with First Lady Melania Trump. 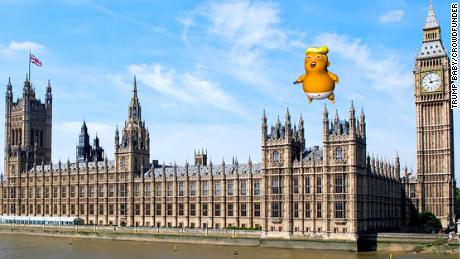 The guest list for the dinner includes business leaders from a range of sectors and is intended to celebrate the links between the two nations — set to take on new importance in a post-Brexit world.The Financial Times reported on Friday that a number of guests turned down an invitation to attend. The entrepreneur Martha Lane Fox told the FT: "I understand why the government have to entertain Trump but I certainly don't want to."The event will begin with a military parade featuring the bands of the Scots, Irish and Welsh Guards in the spectacular Great Court. The music will have an American flavor, with the "Liberty Fanfare" and the "National Emblem" chosen alongside "Amazing Grace."The Trumps will spend Thursday night at the US ambassador's residence, Winfield House, by Regent's Park in London. This will be the only time they venture into central London during a stay likely to be dominated by media coverage of mass protests in the capital Friday, as well as in towns and cities across the United Kingdom. 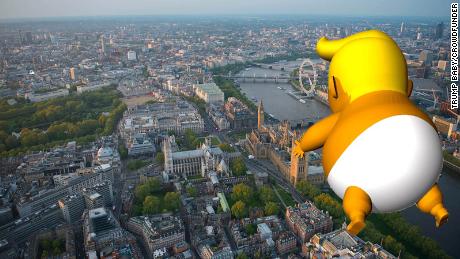 London Mayor London Sadiq Khan has given the go-ahead for a giant "Trump Baby" balloon to be flown close to the UK Parliament during the President's visit. Organizers still need approval from the Metropolitan Police and the National Air Traffic Service for the six-meter-high (19 feet) orange balloon to fly. 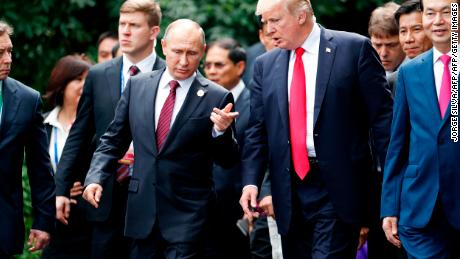 As busloads of anti-Trump protesters head to London on Friday morning, the US President and May will visit a defense site "to witness a demonstration of the UK's cutting-edge military capabilities and integrated UK-US military training," according to a spokeswoman for May.They will then travel to Chequers, the Prime Minister's official country retreat, for bilateral talks on foreign policy, to be followed by a news conference.Trump and the first lady will then go on to Windsor Castle to meet the Queen. While an honor, it is not the state dinner at Buckingham Palace that Trump could have expected when May triumphantly announced a state visit soon after he was inaugurated. 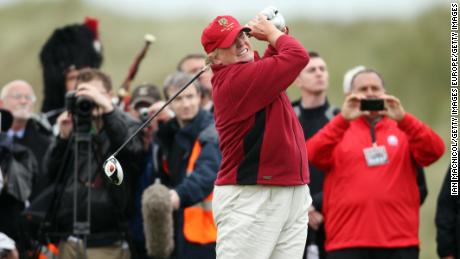 On Friday evening, the Trumps will travel to Scotland, where the President owns two golf properties, Trump Turnberry and Trump Aberdeen. It's not yet been confirmed whether the President will play golf while there for the weekend.His next stop will be Helsinki, Finland, for a much-anticipated summit on July 16 with Russian President Vladimir Putin.

Europe, time to stand up to Trump

Murray pulls out of Australian Open