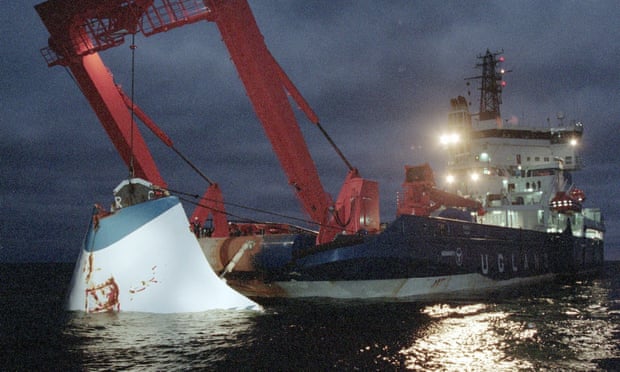 Rock on the seabed may have gouged previously unknown holes in the hull of the ferry Estonia, which sank in the Baltic Sea in 1994 with the loss of 852 lives, officials have said, following a fresh examination of the wreck.

In 1997, an official investigation into Europe’s worst peacetime maritime disaster since the second world war concluded that the Estonia sank after a bow shield failed, damaging a bow ramp and causing the car deck to flood.

But in 2020, a documentary team found two previously unknown holes in the Estonia’s hull, leading to renewed speculation about why the ship sank and prompting Sweden, Estonia and Finland to launch a survey of the wreck and the seabed surrounding it.

“Based on the report by Stockholm University, there is high probability at least that the damage to the starboard side of the ship could have occurred due to contact with the sea bottom,” Jonas Bäckstrand, the chairman of the investigation and acting head of Sweden’s accident investigation authority, told a news conference.

“We have looked at the sea bottom and what’s to be found there. We have to look a little more at the ship as well to be able to confirm.”

The next step of the new official investigation is due to start next March and will focus on the wreck itself.

The Estonia, with 803 passengers and 186 crew onboard, had been sailing from Estonia’s capital, Tallinn, and was headed for Stockholm in stormy weather when it sank, shortly after midnight on 28 September 1994.

Most of those who died were trapped inside the ferry. The wreck lies about 22 nautical miles from Sweden’s Uto island in less than 85 metres of water.

Speculation about the causes of the sinking have included a collision with a submarine and an explosion inside the ship.

Budapest’s best cakes and where to find them

Spain extends lockdown till May 9, but will let children out on short walks