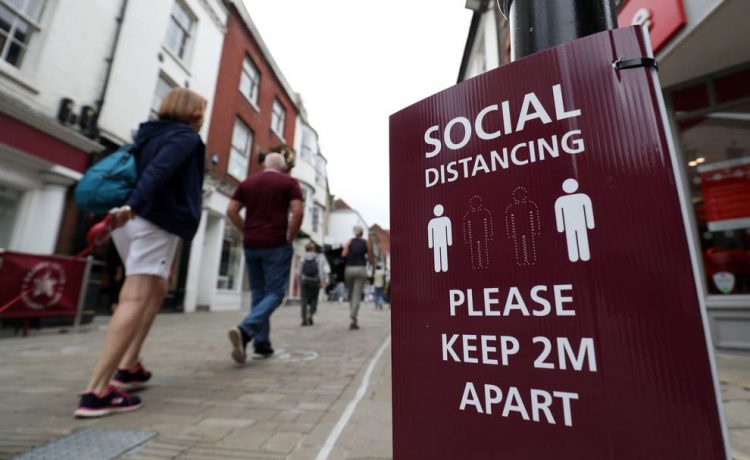 UK retail sales plunged in January as the national lockdown took a far greater toll on the high street than economists had forecast.

Official figures showed total sales dropped 8.2 per cent as non-essential shops closed their doors. A consensus of analysts had predicted a 2.5 per cent decline. All sectors saw revenues fall with clothing taking the biggest hit.

Overall retail sales remained 5.5 per cent below their level in February last year, the Office for National Statics reported.

Online sales grew 35.2 per cent in the month but that was not enough to make up for the drop-off recorded in shopping centres and on high streets.

Despite the negative economic data, government borrowing came in at £8.8bn in January, much lower than the £25bn that had been forecast.

The figures are likely to ease pressure on Rishi Sunak to announce tax rises and spending cuts at the Budget on 3 March. The UK’s total national debt stands at £2.1tn which is roughly equivalent to the entire amount of goods and services produced in the economy in 2019.

“Lower-than-expected borrowing in January should not be interpreted as a signal that the economy is withstanding the third lockdown relatively well,” said Samuel Tombs, chief UK economist at Pantheon Macroeconomics.

“A sharp £2.1bn year-over-year decline in interest payments, and the vanishing of contributions to the EU’s budget, which totalled £2.2bn in January 2020, helped.”

The prime minister is set to make an announcement on Monday laying out a roadmap for businesses in England to reopen.

Hospitality and retail industry bosses are among those urging the government to commit to definite dates so that businesses can plan ahead.

Trade body UK Hospitality said it had received indications from government that the prime minister would not even commit to a date for reopening in a particular month, but that he would tie the return of customers to data on Covid infections and hospitalisations or vaccine take-up.

The group’s chief executive, Kate Nicholls, told The Independent that businesses from pub chains to nightclubs were “hamstrung” by a lack of clarity from the government about the timing and conditions for reopening and the continuation of financial support.

The first minister said hairdressers could be among the shops to reopen as early as 15 March, but warned any easing would be gradual.

Scotland’s first minister Nicola Sturgeon has said her government is focused on a “gradual, phased return to as much normality as possible”.

Northern Ireland’s lockdown will be extended to 1 April but some children will return to school earlier, Arlene Foster, the first minister, confirmed this week.