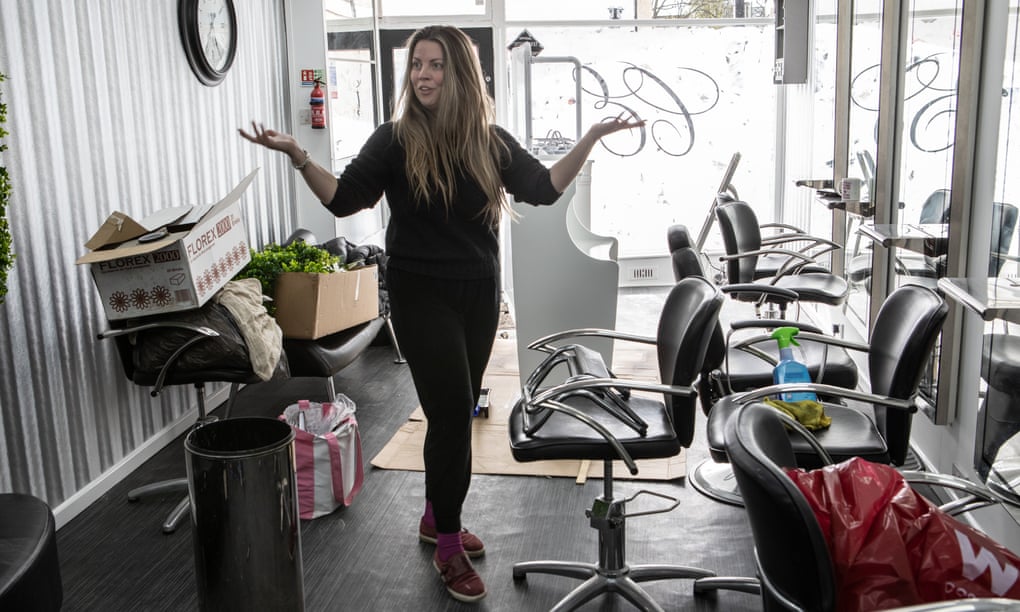 The air is thick with the smell of paint and toolboxes are stacked on the floor inside Cutting Edge Hair Design in Old Harlow, Essex.

Owner Emma Stillwell, 37, decided to use the enforced closure during the latest lockdown to spruce up her hair salon in the historic part of the Essex commuter town. A new sign has been installed outside and she has been racing to finish the refurbishment before reopening the doors on Monday morning.

“I can’t wait to get back, and my staff have been climbing the walls. They are that bored, they have even been cutting hair on dolls’ heads at home,” Stillwell said.

The appointments book is “chocka” until May, with customers desperate for a cut or colour, while Stillwell herself is booked until June. She isn’t concerned that business will slow down after an initial surge.

“We have been here for 20 years, through recessions. We’ve got a good client base, and all of those coming can’t come in two weeks – we have had to spread it out. The fact they will be able to go out to restaurants or the pub means they will want to get their hair done,” Stillwell said.

At the florist business she owns next door, The Flower Box, trading has continued during lockdown, albeit behind closed doors.

“Tragically, we have been busy with funeral work, but we have tried to make the best of it,” Stillwell said, adding that some customers had been upset that Covid restrictions only permitted a collection service and prevented them from visiting the shop to choose flowers for relatives’ funerals.

Before the grand reopening of non-essential retail, personal care businesses and outdoor hospitality on 12 April, much of the pedestrianised high street remained in hibernation when the Observer visited. Staff were arranging stock behind the locked door of the Sue Ryder charity shop, but the wooden shutters were closed at the Marquis Lounge bar.

Dean Zambra will be removing the newspaper covering the windows of D’n’G barber shop before Monday, but recent experience has taught him to be cautious.

“Next week is not looking bad for bookings, but then last time after we came back we thought we’d be packed for weeks, but it didn’t happen,” he said. “I reckon we were 30-50% down. There are so many customers we haven’t seen and I don’t know why – whether they are frightened, or their wives and girlfriends are doing it.”

Further down the high street in Old Harlow, Nel Amodei, 47, owner of Nel’s coffee shop, is also feeling circumspect. She first opened the business in January 2020 and has been operating under some sort of restrictions for almost the entire time.

“I have been surviving, but not making any money. We’ve lacked footfall with everything shut,” she said, adding she had not received any rent reductions.

“There have been times I thought ‘I’ll jack it in, it’s not worth it’. But I’ve put in too much time and effort. I’ve written off the rest of this year, and next year I’ll see what this business can do in normal times.”

Nel has brought her two staff back from furlough, bought outdoor tables and chairs, and stocked her fridges. But she is unsure whether customers will be willing to spend more once they can sit outside to eat and drink, pointing out that more people in Harlow, one of London’s most affordable commuter towns, have lost their jobs in recent months.

About 7,000 residents remained on furlough in March, according to official figures, about 16% of the working-age population of the local authority area, which is home to more than 87,000 people.

As the number of people on furlough has dropped from the 17,000 seen last July, the town’s unemployment rate has been hovering around its current level of 8.5%, which is 2% higher than the national average, for the best part of a year. Pre-pandemic, only 3.5% of Harlow’s population was out of work. In greater Essex, more than 100,000 jobs are still being supported by the government’s coronavirus job retention scheme.

Two regular customers at Nel’s coffee shop, David Gradley and his wife Julie, are looking forward to the further easing of Covid restrictions, when they can trade their takeaway coffees for an outdoor meal. “It will be good to be able to come and sit down, and have a little bit of lunch next week. It depends on the weather,” David said. “I would much rather support a local business than a big chain.”

A couple of miles away in Harlow new town, floors were being mopped and final works were being finished before the grand opening of the town’s JD Gym, operated by sportswear retailer JD Sports.

The site had been refurbished and a spinning studio added during lockdown, said manager Jordan Powles, 25, since the gym’s previous owner, Xercise4less, was bought out of administration by JD Sports last July.

Powles was confident an introductory offer of £5 for the first month would convince fitness fans to ditch their home workouts in favour of the gym’s facilities, before group exercise classes can resume on 17 May.

“I imagine everyone will want to come and have a look,” said Powles. “There will be extra cleaning, and a cleaner on site all hours while we are open. We are asking members to train alone or with their household or bubble.”

Shop staff were back at work inside the town’s Harvey Centre shopping mall, restocking in preparation for Monday. “Loyal fans we thank you,” proclaimed a sign in the window of its branch of Primark, as uniformed workers unloaded boxes inside.

Harlow’s shopping centre, like many others around the country, has changed considerably during the pandemic, and some shops will never reopen. A store previously occupied by the rent-to-own retailer BrightHouse, which collapsed into administration last March, was still vacant. Meanwhile a former branch of Peacocks, which failed last November, was being refitted as mobility aid retailer, but still bore the discount fashion chain’s branding on the shop windows.

How ‘America First’ could turn into to ‘India First’

Why the future is bright for UK-Chinese investment

As the buying and selling of solar energy becomes reality, Singapore could gain further ground on solar target