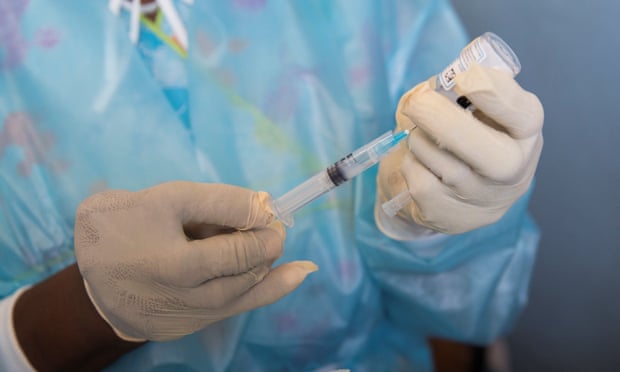 Calling on rich countries to take urgent action to share at least 1bn doses with developing nations, or risk severe economic consequences, the Washington-based fund said the gap between rich and poor economies had widened during the pandemic and risked worsening further next year.

A speedy rollout of vaccines has improved the economic outlook in wealthier countries, including the UK, while a lack of resources to improve vaccination rates and support the reopening of their economies has depressed growth rates across low-income countries.

Setting out the downside risk scenario in its six-monthly health check of the global economy, the IMF said the new coronavirus variants would wipe $4.5tn from global GDP by 2025 with the potential for more than two-thirds of that loss falling on middle- and low-income countries.

The IMF said financial markets could be thrown into panic if the virus was believed to be spreading out of control, restricting lending and investment, and lowering the potential for growth over many years.

While such a turn of events would hurt the outlook for rich countries, the IMF’s chief economist, Gita Gopinath, said: “A worsening pandemic and tightening financial conditions would inflict a double hit on emerging market and developing economies and severely set back their recoveries.”

In recent months, the IMF has joined the World Health Organization, the World Bank and World Trade Organization in urging the wider deployment of vaccines across the developing world.

The report said that close to 40% of the population in advanced economies had been fully vaccinated, compared with 11% in emerging market economies and a small fraction in low-income developing countries.

Gopinath said: “Multilateral action is needed to ensure rapid, worldwide access to vaccines, diagnostics, and therapeutics. This would save countless lives, prevent new variants from emerging, and add trillions of dollars to global economic growth.”

“At the end of June 2021, the pace of daily global vaccinations stood at about 40m doses a day, with China alone accounting for more than 20m of those daily doses,” the report said.

“Vaccine supplies and deliveries to low- and lower-middle-income countries must increase sharply to meet the proposal’s targets. In close to half of countries recent daily vaccination rates fell below the rate needed to meet the 40% target by the end of 2021.”

On its central forecasts, the IMF said the global economy was still on track to grow by 6% in 2021, unchanged from its most recent spring health check. However, it warned fault lines were widening between rich and poor countries – with dramatic results for the shape of the economic fightback from Covid-19.

Despite the unchanged global forecast, the fund upgraded its 2021 growth estimates for advanced economies by 0.5 percentage points, but revised down its forecasts for developing countries by 0.4 percentage points.

Next year, the IMF expects the outlook to improve from its previous forecast for global growth of 4.4% to a fresh prediction of 4.9%. However, this growth rate will also be marked by a stronger performance from the advanced economies and a slower growth rate among most emerging market and developing economies.

The UK growth rate this year was upgraded by the IMF to 7% for 2021, the highest in the developed world alongside the US. The economies of Germany, Italy and France are expected to expand by 3.6%, 4.9% and 5.8% respectively.

Gopinath said many countries were already suffering setbacks to their plans for reopening, including India after a severe second Covid wave between March and May and similar more recent waves in Indonesia, Malaysia, the Philippines, Thailand and Vietnam.

This month has been the strongest January on record for megadeals

The president clearly set himself up: Trumps stock market miscalculation

Where German parties stand on Europe