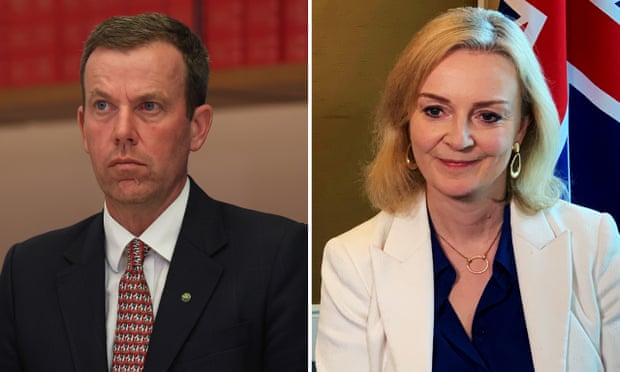 Australia’s trade minister has signalled he is prepared to walk away from a free trade agreement with the UK if Australian agricultural exporters are not granted sufficient access to the British market.

Dan Tehan is in daily talks with his British counterpart, Liz Truss, in the race to reach the outlines of a deal by early next week, but the farming sector in the UK has been pushing back at the possibility of quickly granting tariff-free access for Australian red meat.

Both sides are hoping to strike an in-principle agreement by the time the Australian prime minister, Scott Morrison, meets with Boris Johnson in London on Tuesday next week.

Morrison will first attend the G7 summit in Cornwall, England, as one of four non-G7 leaders invited to the gathering of wealthy developed countries, where leaders are expected to focus on Covid recovery, the climate crisis and security.

Tehan said on Wednesday he was still hoping to reach an agreement in six days but there were outstanding issues “that we’re still seeking to resolve”.

He spoke with Truss for about 90 minutes on Tuesday night and the pair was due to have another call on Wednesday night – but has publicly indicated that a deal should not be taken for granted.

“I’m confident that we will get there – but in the end, if the ultimate agreement isn’t in our national interest, then obviously we won’t be signing up to it,” Tehan said in an interview with Sky News Australia.

“So, what we’re looking to do is to enable more of our agricultural produce to access the UK market,” he said.

Tehan implied the British agricultural sector had nothing to fear from the deal, saying Australia’s process of opening up its economy had led Australian farmers to become “much more competitive” and “globally focused”.

Observers believe the UK is desperate to clinch its first post-Brexit free trade agreement whereas Australia – which has struck a range of FTAs over the past decade – is in less of a hurry.

Previously the UK could rely on the European Union’s specialist negotiators to handle detailed talks on proposed FTAs on behalf of the entire bloc.

The negotiations have been characterised by some unorthodox tactics, with allies of Truss telling a newspaper in April that Tehan was inexperienced and that the UK trade secretary “plans to sit him down in the Locarno Room [in the Foreign Office] in an uncomfortable chair, so he has to deal with her directly for nine hours”.

The British high commissioner, Vicki Treadell, said last week she wanted to “manage expectations” about the free trade agreement with Australia, even as both sides were negotiating “at record speed”.

In a briefing which included Guardian Australia, Treadell said both sides were working hard to reach an agreement in-principle but this “just sets out the framework of what we want to achieve” and it was unlikely to come into effect until next year.

Asked about concerns raised by the British farming sector, Treadell said the Australian government’s priorities for the deal included tariff-free access for its agricultural exports and it was “clearly an ongoing negotiation” about how that might be phased in.

She said there was “work to be done with our agricultural sector in the UK, to sell them the opportunity end of this because it’s two-way”.

Morrison leaves Australia late on Wednesday to attend the G7. The theme of this year’s British-hosted G7 summit is building back better from the coronavirus and creating “a greener, more prosperous future”.

Before travelling to Cornwall, Morrison will first visit Singapore to discuss regional security issues and a potential travel bubble between the two countries.

After the G7, Morrison will go to London for a two-day program with Johnson, and then on to Paris for trade and defence talks with the French president, Emmanuel Macron.