On Monday a United Nations fact finding mission investigating Myanmar's treatment of hundreds of thousands of Rohingya who fled to neighboring Bangladesh last year recommended the country's military leaders be prosecuted for genocide. For that to happen, however, the United Nations Security Council needs to refer it to the International Criminal Court in the Hague. That looks unlikely."The UN Security Council is paralyzed, the fact that it hasn't moved on Syria or Yemen just undermines the whole operation of the Council, it undermines the international criminal court and its ability to actually bring about international justice," said Cecilia Jacobs, a senior lecturer at the Australian National University College of Asia and the Pacific in Canberra.Myanmar rejects the findings and the accusations. When the UN Human Rights Council decided last year to send the mission to investigate, the Myanmar foreign minister said investigators would "do more to inflame, rather than resolve the issues at this time." On Tuesday, Zaw Htay, a spokesman for Myanmar's presidential office, told CNN via text message that the government had already formed its own independent commission and there was no comment on the mission's findings.State Counselor and Nobel Laureate Aung San Suu Kyi was singled out in the UN mission's statements, saying that she "has not used her de facto position as Head of Government, nor her moral authority, to stem or prevent the unfolding events in Rakhine State."

No expectation of domestic justice

The damning UN report contains allegations of murder, imprisonment and sexual violence against the Rohingyas, carried out by the Myanmar military, known as the Tatmadaw."Military necessity would never justify killing indiscriminately, gang raping women, assaulting children, and burning entire villages. The Tatmadaw's tactics are consistently and grossly disproportionate to actual security threats, especially in Rakhine State, but also in northern Myanmar," the report said.However, there was no possibility that Myanmar's investigation would ever really hold anyone senior accountable, says Aaron Connelly, a research fellow in the East Asia Program at the Lowy Institute in Sydney."I make the case that Aung San Suu Kyi and this government has absolutely no intention to prosecute in any kind of transparent or balanced way crimes against humanity in Rakhine State," he told CNN. "I wouldn't be surprised if they go after some of the Rohingya militants, but they're not going to really go after the commanders who ordered these attacks."The Myanmar government has long claimed that its actions were in response to an attack on police outposts by Rohingya militants said to belong to the ARSA insurgent group. Connelly said there might be "token prosecutions of enlisted personnel or junior officers," but as in the case of two Reuters journalists facing trial in Myanmar for their reporting on the Rohingya, "they've actually prosecuted more people involved in revealing the massacre than they have people involved in the massacre, so we're unlikely to see domestic accountability."Wa Lone, 32, and Kyaw Soe Oo, 28, have been charged under the state's Official Secrets Act and face up to 14 years of jail for their reporting on the Rohingya Muslim minority and the hundreds of thousands who fled to Bangladesh last year to escape violence and official persecution.

Depending on the UN Security Council

An absence of justice at home leaves the international community few options, particularly if the UN Security Council itself is unlikely to help, for several reasons.Myanmar's main ally in the Security Council is China, and China has long defended the once isolated regime while the rest of the world has tried to sanction Myanmar's generals over the years for their political persecution of democracy activists, including in the past, Aung San Suu Kyi herself.Russia has often sided with China against the other members of the Council.Yet the administration of US President Trump, in particular his national security adviser John Bolton, is also unwilling to refer cases to the International Criminal Court because of the precedent it would set."The US mission to the UN has made it known that they're not going to make any ICC referrals at least as long as the prosecutors seek to investigate US war crimes in Afghanistan," noted Connelly. "John Bolton is also Enemy No.1 of the ICC, and has let it be known that there won't be any referrals as long as he's the national security adviser." 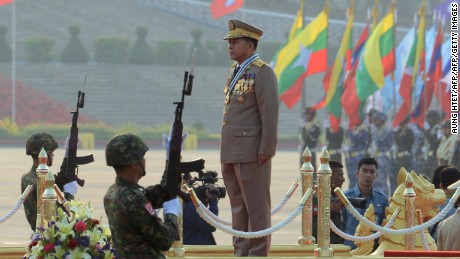 Another path to justice

There is another way, one which lawyers including Toby Cadman have pursued without having to deal with the UN at all."What we're trying to do is to get the International Criminal Court to use Bangladesh's territorial jurisdiction and look at forced displacement, and they have the jurisdiction to do that," he told CNN.Because Myanmar isn't a party to the ICC, the international body has no jurisdiction to bring charges there. But the flight of hundreds of thousands of people from Myanmar to neighboring Bangladesh — which is a signatory — might give the ICC an opening and an opportunity to still prosecute for genocide, Cadman argues."The forced displacement is an element of genocidal intent, it's to remove the Rohingya from Myanmar by forcing them out by killing, raping and looting. The forcing is an element. That's something the court may decide," he said.Cadman, head of chambers at Guernica 37 International Justice Chambers, has filed an amicus brief, along with other advocates, to the International Criminal Court to deliberate. A pre-trial chamber has to make that decision, he told CNN, and expects that announcement to come at any time."The ICC has jurisdiction, but again, we're looking at many many months, if not years if we see trials," Cadman said. "Slowly the wheels of international justice move, and they do move and that is the appropriate way forward."

The mission for evidence continues

In the meantime, it is imperative that human rights groups and international bodies continue to gather evidence to use should those trials ever go ahead, said Australian National University's Cecilia Jacobs."The fact finding mission and this report has been really crucial in building up the evidence for the prosecution, and there's nothing stopping the international community to gather (more) evidence," she said.She blames the West's early encouragement of Myanmar's tentative outreach to the world after years of isolation as part of the reason the international community has so little sway with Myanmar now."I think they acted too early, and gave too many concessions before any meaningful political transition occurred, that has really left them without much leverage, and I think a lot of the behind the scenes diplomatic work that went on wasn't enough without the cooperation of the UN Security Council," she said.The failure of the Security Council is less a criticism of the institutions supporting the UN, and more result of "the countries that interact with each other and use their prerogative to thwart action," said Connelly from the Lowy Institute."The failure here is in national capitals, not in Turtle Bay (home to UN headquarters in New York). The UN system has held up pretty admirably," he argues. "All those missions did their jobs and fearlessly came out with conclusions which at the time were quite shocking and they didn't hold back."

Mahathir Mohamad on Islam, politics and the love of his life