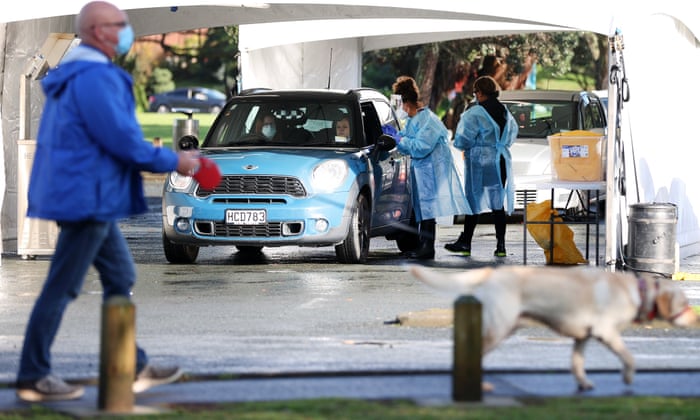 New Zealand’s coronavirus cluster has grown to 10, with genomic sequencing linking it to the Delta outbreak that began in Sydney, as the country woke up to day one of a snap lockdown stemming from just one case.

The Covid-19 response minister, Chris Hipkins, told broadcaster RNZ “we’re seeing more cases coming through, I don’t have details of those cases. But yes, I can confirm that we have further positive test results since the press conference today.”

The country went into a snap level four lockdown – the highest level of restrictions – on Tuesday night, after detecting one case with no obvious links to the border. New Zealand has not had a level four lockdown in more than a year, and the case is the country’s first instance of Delta transmission in the community.

The prime minister, Jacinda Ardern, warned on Wednesday that there would be more cases given the activity of those infected and that a link to the border had yet to be established, adding “there is more to be done to help piece together this puzzle”.

“Our ability to narrow down that this is a case that is linked to New South Wales outbreak, gives us a lot of leads to chase down as quickly as we can,” she said.

The seven community cases are all linked to the 58-year-old man who tested positive on Tuesday. One person is a fully vaccinated nurse at Auckland city hospital and another is a teacher at an Auckland high school.

The director general of health, Ashley Bloomfield, said most of the cases identified were in their 20s.

“They’ve been out and about a lot, and I’m flagging that there will be large numbers of locations of interest. It is very important that everybody keeps an eye on these,” he said.

That includes the Sky City casino on Saturday night and a central Auckland church on Sunday.

The 58-year old man is believed to have been infectious since 12 August. Since then he has travelled from Auckland to Coromandel and back, stopping at a number of locations along the way.

Ardern said the public should expect to see the number of cases rise, given how active the people have been, how quickly Delta spreads and that the man spent time in a region that is a popular destination for travellers from other parts of the country.

“I know that given Delta has not been in our community before, that will be news that people will find deeply concerning – but just I want to reassure people the best place we can be right now for that news and information is level four, and following all the level four rules,” she said. “These measures have worked before and they will work again.”

The prime minister also announced that mask-use will now become mandatory for people over 12, if they are visiting supermarkets, pharmacies or other locations open for essential services. Mask use is already mandatory on public transport.

The vaccine rollout will also continue from Thursday morning, after momentarily being paused.

The country’s Covid-19 vaccine rollout has faced scrutiny. As of Monday, 22.9% of the population had been fully vaccinated, with 40% having had at least one dose. The numbers are lower for fully vaccinated Māori (14%) and Pasifika (20%) populations, and New Zealand has the lowest vaccination rate in the OECD, according to the World Health Organization.

In Auckland, the vaccine rate among older Māori is now at 71%.

He said the intention of the vaccine was to protect a community, but that rollout was currently designed to protect European New Zealanders more than Māori.

To make the system equitable, the vaccine rollout needed to take into consideration the difference in risk for Māori and non-Māori populations. McKree Jansen said that the risks for Māori over 40 were equivalent to the risks for over-65 non-Māori.

He said Māori were exposed to much greater risks from Covid, due to existing problems of under-diagnosis of health problems and poorer access to healthcare and healthy homes.

Māori will be pushed further down the list for vaccinations as the eligibility expands to other non-Māori age groups, he said. “It’s not equity if Māori get vaccinated last.”

Those vaccination levels were even more worrying now that Delta had arrived in New Zealand, McKree Jansen said, adding that a potential outbreak could overwhelm health services and ICU, which would place further strain on Māori access to healthcare.

“I am deeply worried. It’s emotional, we are on the verge of seeing this get out of control.”

The leader of the opposition, the National party’s Judith Collins, told local media that there was no option but to go into level four lockdown, because New Zealand “has a largely unvaccinated population”.

Collins questioned why the government had paused the vaccination rollout during the lockdown. “It seems unusual to me. I’ve been in the public vaccination centres and it looks to me that everyone has been extremely safe in their social distancing,” she told Newshub.

“The best thing we can do is get everyone vaccinated as soon as we can.”

Under level four, all New Zealanders other than essential workers are asked to stay home and shelter in place, leaving the house only for essentials such as food, medical supplies, medical care and socially distanced outdoor exercise. They are to remain within a “bubble” of immediate household members or dependants. The initial announcement of that lockdown was for three days nationwide, and for four to seven days for Auckland and Coromandel. It may be extended, depending on whether health officials can identify a source of the virus from the border, or how many additional cases are detected.

Officials have also advised New Zealanders to scan QR codes into a contact-tracing app. Anyone with symptoms is advised to self-isolate and contact medical authorities about testing. The government has released a list of “locations of interest” online – anyone who has attended those locations at the stated times is advised to call Healthline on 0800 611 116.

Another woman’s papers forged to get KGBV jobs