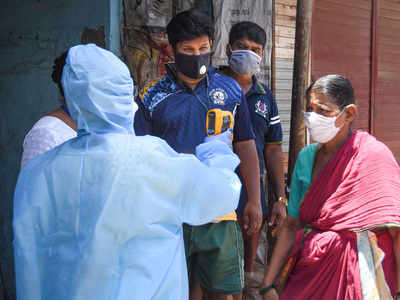 NEW DELHI: India's first sero-survey on Covid-19 spread has found that lockdown and containment measures were successful in preventing a rapid rise in infections, but a large proportion of the population still remains susceptible, the government said on Thursday, asserting that the country is not in the community transmission stage.
The sero-survey has two parts, the first being, estimate fraction of population that has been infected with SARS-CoV-2 in general population and the second being, estimate fraction of population that has been infected with the coronavirus in containment zones of hotspot cities, Indian Council of Medical Research (ICMR) Director General Balram Bhargava said at a media briefing.
The first part has been completed and the second is ongoing, he said, adding that the survey was launched in May by the ICMR in collaboration with state health departments, the National Centre for Disease Control (NCDC) and the World Health Organisation (WHO).
Bhargava said the study involves surveying of a total of 83 districts with 26,400 people enrolling for it.
The figure that was shared with the media stated that data from 65 districts has been compiled till now.
The sero-survey has found that 0.73 per cent of the population in the districts surveyed had evidence of past exposure to SARS-CoV-2 , Bhargava said.
“Lockdown and containment (measures) have been successful in keeping it low and preventing rapid spread,” he said, citing the survey.
However, it means that a large proportion of the population is still susceptible and risk is higher in urban areas (1.09 times) and urban slums (1.89 times) than rural areas, Bhargava said
It found that infection fatality rate is very low at 0.08 per cent and infection in containment zones were found to be high with significant variations, but the survey is still ongoing, he said.
Since, a large proportion of the population is susceptible and infection can spread, non-pharmacological interventions such as physical distancing, use of face mask or cover, hand hygiene, cough etiquette must be followed strictly, Bhargava said.
Urban slums are highly vulnerable for the spread of the infection and lRead More – Source

Railways planning to increase MGNREGA use for migrant workers