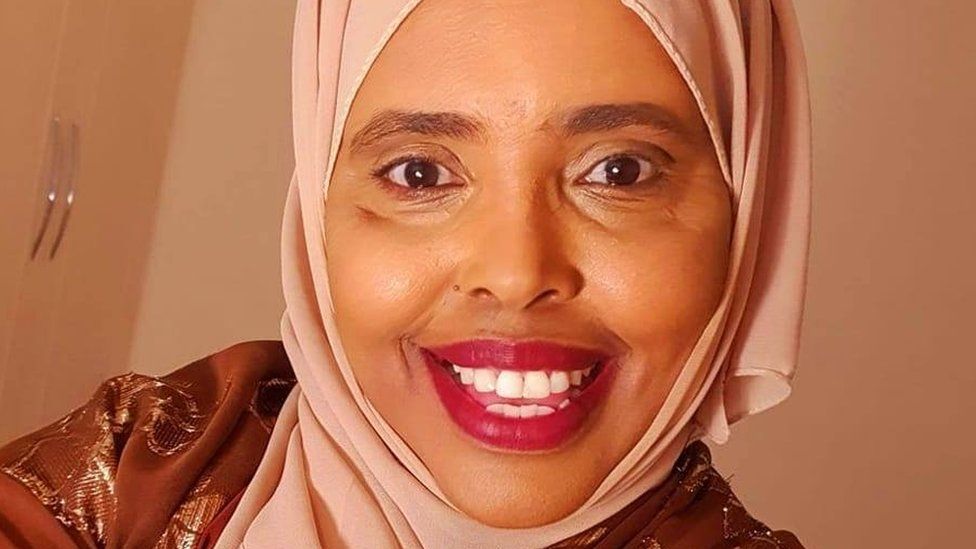 “We didn’t kill you in Somalia and now you have freedom in the UK, but we will silence you on Facebook” – this warning was given to a UK-based Somalia-born women’s rights activist.

Hanna Paranta (known as Hanna Abubakar online), who helps rape and domestic violence survivors via her Facebook page, says she received the phone call a year ago from one of those campaigning against her work.

She says Facebook’s report function, created to ensure a space on the internet that is free from abuse, is being weaponised to do the opposite.

Her Facebook page has more than 130,000 followers, but she believes that Somalis who are against greater female equality have reported her to Facebook in an effort to get her page shut down.

Facebook says each report is treated seriously and investigated.

Now living in the UK, Ms Paranta, 44, moved from Somalia to Sweden when she was around seven years old. It was there that she became a social worker and for the past decade she has been a women’s rights advocate.

She started helping victims of domestic violence and rape in the large Somali diaspora – and is also well known in Somalia where she is involved in various charities – something that has upset more conservative groups in the Muslim nation.

When she goes to Somalia she always travels with bodyguards for her protection and on her last visit in September 2020, somebody tried to poison her food at her hotel in the capital, Mogadishu.

Thanks to a tip-off she did not eat the meal, but then an armed gang tried to kidnap her – the bodyguards intervened and the men escaped.

On her return came the phone call and since then her Facebook page has frequently been disabled or restricted by the social media giant – and she believes those behind the complaints want to shut her down completely.

Despite raising the issue with Facebook she thinks the company has been unable to identify and regulate these false reports.

And Ms Paranta thinks that she has become the victim of a co-ordinated mass attack.

“I started contacting Facebook in December. I told them everything. That this group wants to close my page and sent me threats, but no-one listened to me,” Ms Paranta says.

She believes that those behind the complaints “have a Facebook messenger group with more than 300 members, where they are targeting and reporting people”.

A supporter of Ms Paranta joined the group and sent her screenshots of its chats.

These – as well as details of a complaint she has made to the UK police – were sent to Facebook.

Her dealings with the company have been equally frustrating: frequently referred to different departments, or left to communicate with bots.

After the BBC approached Facebook for a response to these allegations, Ms Paranta says some restrictions on her page were lifted a few month months ago, like her live-streaming function.

A Facebook spokesperson said that while critical discussions were permitted the company did not allow people to “abuse or harass” others on Facebook.

“We have removed the violating content brought to our attention, and our investigations found no current restrictions on the activist accounts in question.”

However, Ms Paranta says she is still “shadow banned”, meaning that her posts appear less frequently in her followers’ feeds.

And she is unable to gain new fan subscriptions and verify her page with a blue tick.

Amina Musse Wehelie, journalist and mental health advocate, has discovered that there is an influential Somali figure who is spearheading these reporting groups on Facebook.

He, and other Somali men, have been grooming women in the diaspora to use them in their war against prominent female activists, she says.

“They will reach single mothers with no jobs or close family. Women who are lonely, and feeling far away from their home country [Somalia].

“They start telling them that they can ‘do anything’ and that they are ‘special’. Afterwards, they convince them to work for them and offer them money.”

As part of the smear campaign lies are spread on social media about the Somali activists – it has become particularly brutal towards Ms Paranta over the past months.

“The leader of the gang first said that I was trafficking organs. Then he said I was selling Somali women as sex workers and now he is saying that I am trying to convert Somalis into Christians,” she said.

This type of propaganda has encouraged more reporting of Ms Paranta’s Facebook, since many are now under the false impression that she is a criminal, making it impossible to do her work.

For Ms Wehelie and Ms Paranta language is the main reason why Facebook is not investigating the fake reports – and they feel they are not being taken seriously because they are women from the Somali community.

“My view is that when these people are using their language, Facebook does not understand,” says Ms Wehelie, suggesting that Facebook’s translate function for Somali does not work properly.

The journalist believes that one way to fix this would be for Facebook to employ more Somalis to do translations.

Ms Paranta fears her page will continue to be targeted and the people she helps will be left with no-one to turn to.

Why the Sinai peninsula is so dangerous