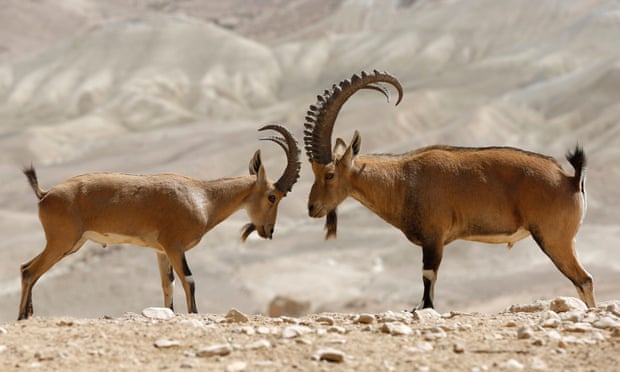 Photographs posted online of westerners posing with the body of a rare Nubian ibex angered Sudanese wildlife campaigners this week. They called for Facebook to remove the pages of tour groups promoting such hunts.

While wildlife hunters have long come from the Gulf, Abubakr Mohammad, a biodiversity researcher, has seen a recent trend for western trophy hunters to come too, which he said could be a result of the country being more open to outsiders since the removal of Omar al-Bashir, the former president. Permits for hunting are being given out without sufficient scrutiny, says campaigners.

The Nubian ibex is considered extremely rare in Sudan and its population is classified as vulnerable and in decline, according to the International Union for Conservation of Nature (IUCN).

“Before this, they were not able to do it because of the government’s approach to European visitors, especially to these areas – they were considered spies.

“With this new government, the whole world comes to Sudan,” said Mohammad, who runs a popular Facebook page on biodiversity in Sudan. “They’re all taking advantage..”

Hunt Geo, which is based in Austria and promotes hunting trips around the world, released a YouTube video in December of what it said was the first hunt in Sudan in 10 years, since the secession of South Sudan. Hunt Geo posted photographs online of its customers posing with the Nubian ibex.

The photos were also shared by Kush Armaments, a Sudanese company that attracted Mohammad’s attention because he noticed it shared his posts about wildlife spots in Sudan. He feared it was then hunting in those areas.

Responding to anger in Sudan, Kush Armaments has deleted posts of the hunts, but they remain on Hunt Geo’s Facebook page. Neither Hunt Geo nor Kush Armaments responded to requests for comment.

Mohamed al-Tayeb, a Sudanese singer and wildlife campaigner, said Sudanese law needed to be changed to outlaw such hunts, but that there was still a problem of the companies being backed by powerful figures in the country.

“I think it’s really difficult to change this – they are the power in Sudan, they are the people who have money and weapons. Maybe they will close one company if there is media pressure about it, but this will not end as long as Sudan is ruled by militias,” said Tayeb.

Mohammad said that permits were given without enough attention to which animals were being hunted and whether rules were followed. He called for all hunting to be halted, especially as there is no clear idea about how many Nubian ibex remain in Sudan.

The IUCN said last year that the number of Nubian ibex in Sudan and neighbouring Eritrea was unknown. Mohammad said Sudan needed to update its laws to protect wildlife and write into the constitution a requirement for a body that would tasked with conservation.

UNICEF: Boko Haram has kidnapped more than 1000 children in Nigeria

Arsene Wenger reveals why he dropped Alexis Sanchez against Chelsea