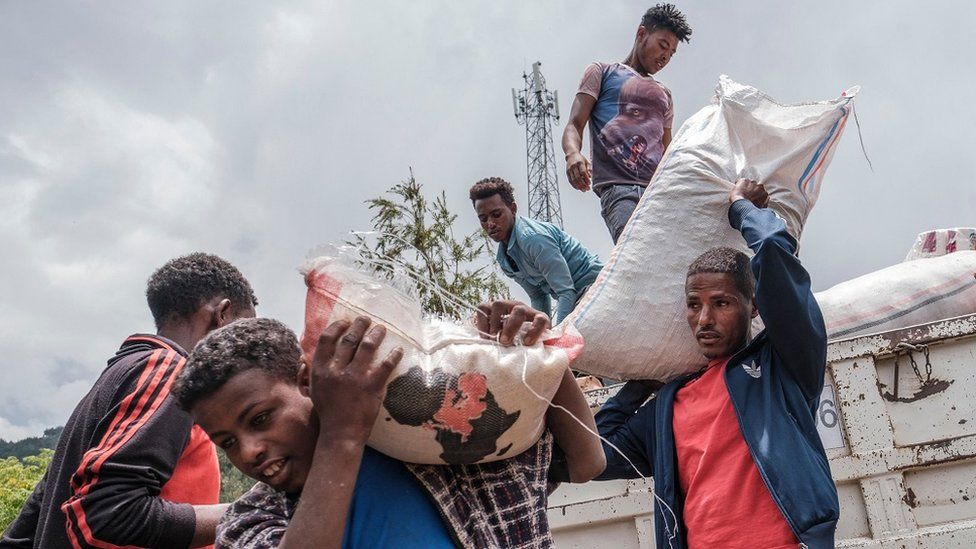 The spread of conflict from Ethiopia’s northern Tigray region into neighbouring Amhara has displaced many thousands of people, leaving many desperately short of food.

But we’ve found that some were taken elsewhere and at earlier times – from Somalia, Tigray and even from the famine in Ethiopia in 1984.

How serious are food shortages in Amhara?

The Ethiopian government puts the number of those displaced by recent fighting in the Amhara region at more than 500,000, and those in need of food at more than one million.

Some food aid has been reaching the region but the government says access to one of the worst-affected areas in Amhara’s North Wollo district has been “hindered” by opposition forces.

The TPLF disputes this and has blamed the government, saying it has put areas it controls under siege and cut off communications and electricity.

The UN World Food Programme (WFP) says while many thousands are in need of food in some parts of the Amhara region, “at this point we have no evidence of famine in North Wollo”.

“[But] as the offensive continues and large areas remain inaccessible due to active fighting, food insecurity in this zone is serious,” according to the WFP.

We have uncovered several misleading images used in a campaign to draw attention to the humanitarian situation in Amhara.

The image in the tweet below has been widely shared but it is not from Amhara.

We have traced it to 2011, where it was used in news articles reporting on the drought in the Somali region of Ethiopia, (also known as the Ogaden).

Some of the images in the next tweet, shown below, are also misleading.

The photo on the left was taken in Somalia, at a displacement camp south of the capital Mogadishu in 2011.

The one of the child lying down, was taken in May this year at a hospital in Mekele, the regional capital of Tigray.

But the third image does apparently show a recent image from Amhara. It was taken from videos posted by the Amhara Media Corporation earlier this month, and described as a displaced woman in North Wollo.

The tweet itself has been retweeted more than 10,000 times.

Another tweet we’ve looked into, below, says the attached image is of women and children from the Amhara region.

However, we’ve tracked its first use to stories in May from the Tigray region. It shows a group of people who’ve fled fighting and sought refuge at a school in Mekele.And one final widely shared tweet we’ve found, refers to food shortages in Amhara, but has used a black and white image from the famine in Ethiopia in 1984, when many hundreds of thousands of people died.

Turkmenistan: Getting Covid in a land where no cases officially exist

Ethiopia returns to a state of emergency