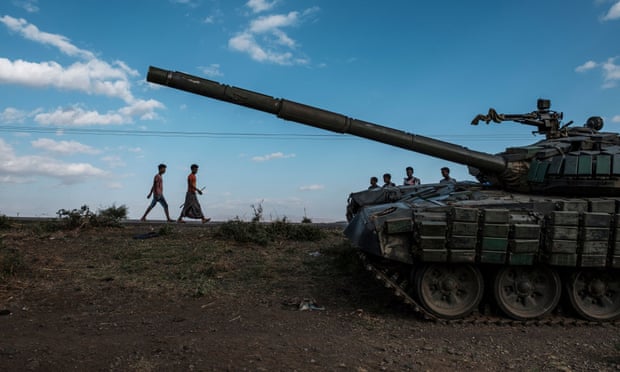 Almost 200 children under the age of five died of starvation in 14 hospitals across Ethiopia’s northern Tigray region between late June and October, according to data collected by local doctors and researchers.

The research, shared with Agence France-Presse by Dr Hagos Godefay, the former head of the health bureau in the pre-conflict Tigrayan government, offers a snapshot of the suffering in Tigray, where a communications blackout by federal authorities has prevented a full examination of the toll of the war.

The region is also being subjected to what the UN has described as a de facto aid blockade, meaning most essential medical supplies are no longer available.

Hagos told the news agency that 186 children under five had died from severe acute malnutrition in the 14 hospitals still functioning in Tigray, and condemned the blockade and its impact on medical services as “collective punishment”.

Hospitals were seeing three to four deaths a week from ordinarily treatable illnesses such as pneumonia and diarrhoea, Hagos said, and tens of thousands of people are in urgent need of “chronic follow-up” treatments and care for conditions such as HIV, cancer and diabetes.

Hagos said according to data collected by doctors in hospitals as well as through household surveys by doctors and university researchers in the region, 29% of children in Tigray are acutely malnourished, up from 9% before the war. For severe acute malnutrition, the figure is 7.1%, up from 1.3% before the war, he said.

Ethopia’s prime minister, Abiy Ahmed, sent troops into Tigray in November 2020 in attempt to remove the Tigray People’s Liberation Front, in response, he said, to TPLF attacks on army camps.

Since then thousands of people have been killed, thousands detained millions displaced in Tigray and more recently the Amhara region. The conflict itself and the prominence of ethnic militia groups and Eritrean forces have blown open historic regional and ethnic fault-lines in Africa’s second most populous country.

Abiy’s government has rejected claims that it is blocking aid to Tigray, saying access has been restricted because of TPLF advances into the neighbouring Amhara and Afar regions.

Earlier this month, eight other rebel groups, including the Oromo Liberation Army (OLA) – a historical foe of the TPLF – announced it was joining the Tigrayan forces in the conflict.

In late October, TPLF forces said they had seized control of the strategic cities of Dessie and Kombolcha, positioning them to move down a major road towards Addis Ababa, and raising fears of an attack on the capital.

In recent weeks, Ethiopian authorities have accelerated arrests of thousands of Tigrayans in the capital and across the country, as part of sweeping state of emergency provisions announced on 2 November. As many as 1,000 people are reported to have been arrested in the last week, according Liz Throssell, a spokesperson for the the UN’s high commissioner for human rights.

The government has defended the arrests, saying it is detaining those suspected of supporting TPLF forces approaching Addis Ababa. The UN, rights groups, relatives and a government-created Ethiopian human rights commission have said the detentions, including of children and elderly people, appear to be on the basis of ethnicity.

“We are concerned that arrests have been continuing over the last week in the Ethiopian capital, Addis Ababa, as well as in Gondar, Bahir Dar and other locations, as police invoke the excessively wide provisions of the state of emergency,” Throssell said at a press briefing on Tuesday.

“These developments are all the more disturbing given that most of those detained are reported to be people of Tigrayan origin, arrested often on suspicion of being affiliated to or supporting the TPLF.”

Senators look to bounce back against surging Wings (Nov 02, 2017)

Klopp – West Brom stalemate nothing to do with player rotation